Why Malaysia's plan for 'Asia's Eurostar' went off the rails 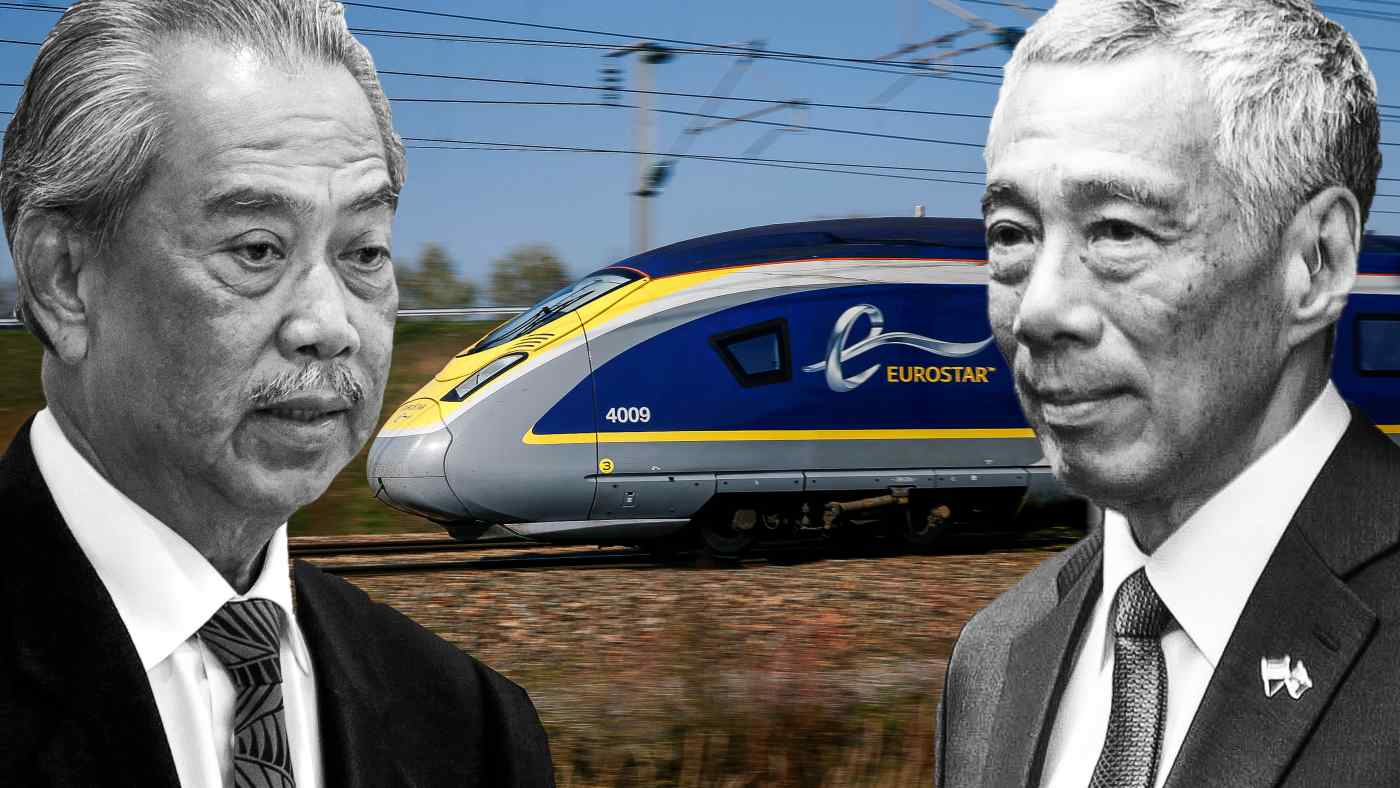 BANGKOK -- The coronavirus pandemic has warped the world's idea of distance. A bridge of just 1 kilometer separates Singapore and Malaysia but the distance may as well be a light year, as both countries have closed their borders since March 2020.

But from May 17, travel between the two countries will be allowed for family funerals and visits to the seriously ill. Why are they moving forward at a time when infections are again rising in Malaysia?

The answer is that both countries depend on cross-border commuters. About 300,000 people who traipse over the Johor Strait from Malaysia to Singapore on a daily basis have not been able to work over the past year. Last August, in response to requests from companies and workers, officials allowed cross-border commuters to enter the country on condition that they stay for 90 days or longer.

In many cases, companies in Singapore have set up new housing arrangements for their Malaysian employees. Such measures are expensive, but it is difficult to hire manufacturing employees in Singapore, leaving the companies with little choice.

The situation highlights the interdependent relationship. Singapore, a highly developed city-state, and Malaysia, a country with abundant land and resources, form a loosely integrated economic zone. The two countries account for over 10% of each other's exports and imports, and are each other's second-largest trading partners after China.

A cross-border high-speed rail project, which had been under development since 2010, was expected to further accelerate that economic integration. But on Jan. 1, the two governments announced the termination of the project. At the end of March, Malaysia paid about 102.8 million Singapore dollars ($77.0 million) in compensation to Singapore.

The two countries had agreed in 2013 on the plan to connect Kuala Lumpur and Singapore, 350 km apart, with a train service that would make the trip in 90 minutes. A formal contract was signed in 2016, and both sides agreed they would pick a company to construct and operate the first high-speed rail project in Southeast Asia in an open international bidding process, generating a great deal of excitement.

In Japan, a consortium of companies including East Japan Railway, Sumitomo Corporation and Hitachi put forward a plan, similar to Japan's shinkansen, estimated to be worth 2 trillion yen. Chinese, South Korean and European companies were also expected to make competitive bids.

The project, however, fell prey to political turmoil in Malaysia. In May 2018, the government of Mahathir Mohamad, which replaced that of Najib Razak, was hesitant about covering the huge cost of the project and froze it for two years, paying out compensation of about SG$15 million to Singapore.

The government of Muhyiddin Yassin, which took office in March 2020 after ousting Mahathir, extended the project deadline by seven months to negotiate a review, but it failed to reach an agreement with Singapore by the end of the year as promised.

How did the high-speed rail project between the two countries come about in the first place, and why was it abandoned? Tracing its history, it became clear that both the inception and the termination of the project were the work of Malaysia. 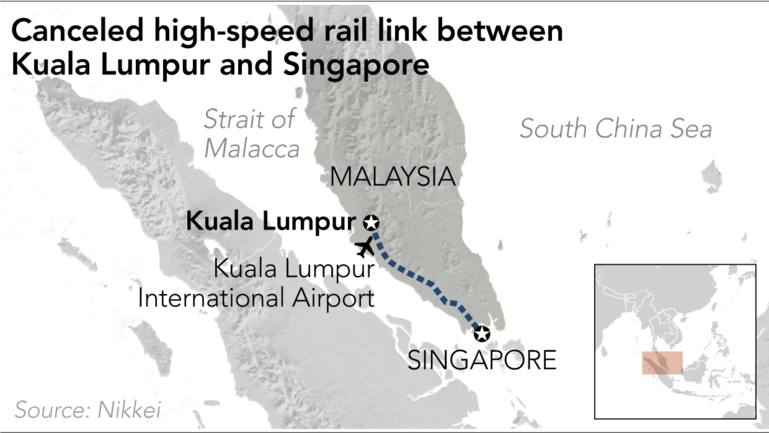 In an effort to escape the middle-income trap and join the developed world, the Najib administration in 2010 outlined an "Economic Transformation Program" with the cross-border high-speed railway as the centerpiece of 131 projects to be implemented in the near future.

Geographically, Malaysia is situated between Indonesia to the south and the Mekong region comprising Thailand, Vietnam, Cambodia, Myanmar and Laos to the north. Its neighbors all have promising economic growth prospects. "High-speed rail was the key to attracting more investment in the future," said Fumitaka Machida, president of AseanPlus Consulting.

Malaysia also made concessions on long-standing issues to win Singapore's consent. The Malaysian side owns the site and facilities of the Malayan Railways, which runs through the center of the country and has long been an obstacle to urban development.

In 2011, Najib relocated the terminus nearer to the border and moved the tracks, ahead of the agreement in 2013. Singapore Prime Minister Lee Hsien Loong likened the route connecting two of Asia's key cities to the Eurostar that links London to Paris and the European continent.

When it comes to high-speed rail projects in emerging countries, national prestige tends to take precedence over economic viability, which should be the most important factor. But the Kuala Lumpur-Singapore route checked both boxes.

According to a 2018 estimate by the ISEAS-Yusof Ishak Institute in Singapore, the line would have an economic impact of $1.59 billion per year for Malaysia and $640 million for Singapore. The report said, "the HSR project is likely to accelerate the structural transformation of the Malaysian economy toward services."

At the same time, the Institute of Developing Economies at the Japan External Trade Organization (JETRO) conducted estimates for four high-speed rail lines planned in Thailand. In the case of the northeastern line that connects Bangkok to Nong Khai Province, which is considered to have the greatest economic value, the cumulative impact over 10 years is just $11.54 billion, or an annual average of $1.15 billion. The Eurostar terminal at Gare du Nord train station in Paris. The high-speed rail between Singapore and Malaysia has been likened by the PM Lee to the Eurostar that links London and Paris.     © Reuters

How did such a promising project end up back on the drawing board? The issue was not only the financial burden brought on by the new coronavirus pandemic. Statements from government officials and media reports suggest that it was the Malaysian side that had reneged on terms of the deal.

The agreement was to pick a company responsible for providing the rolling stock, laying the tracks, and designing and operating the system through an international bidding process. However, Malaysia insisted on dropping this provision during negotiations to review the agreement.

The government wanted to fast-track the process to make up for the two-year delay. It also saw an opportunity to use the project to stimulate the economy after the pandemic. The government must have thought that if foreign investment was kept out of the project, local businesses would benefit.

But Singapore found the new terms unacceptable. Transport Minister Ong Ye Kung said in parliament after the project was scrapped that Singapore wanted to choose a company through an international bidding process to ensure that the interests of both countries were protected, and its removal constituted a fundamental departure from the bilateral agreement.

Immediately after the project was ended, Malaysia began discussing the construction of the section within its borders. But a senior executive at a Japanese consulting company was cool to the idea. "The project was attractive because Singapore was one of the terminals," the executive said. By prioritizing short-term interests, Malaysia has, in fact, sabotaged itself.

The rail project would have further unified the economic zone, but its failure brought into sharp relief the gap between the two countries' ideas of transparency and rationality. Singapore quickly grew to become a developed country, while Malaysia, through the way it managed this project, has perhaps offered a glimpse into why it has constantly lagged behind the city that it once expelled from its own federation of states. The distance between the two may be just 1 km, but the differences have proven unbridgeable.