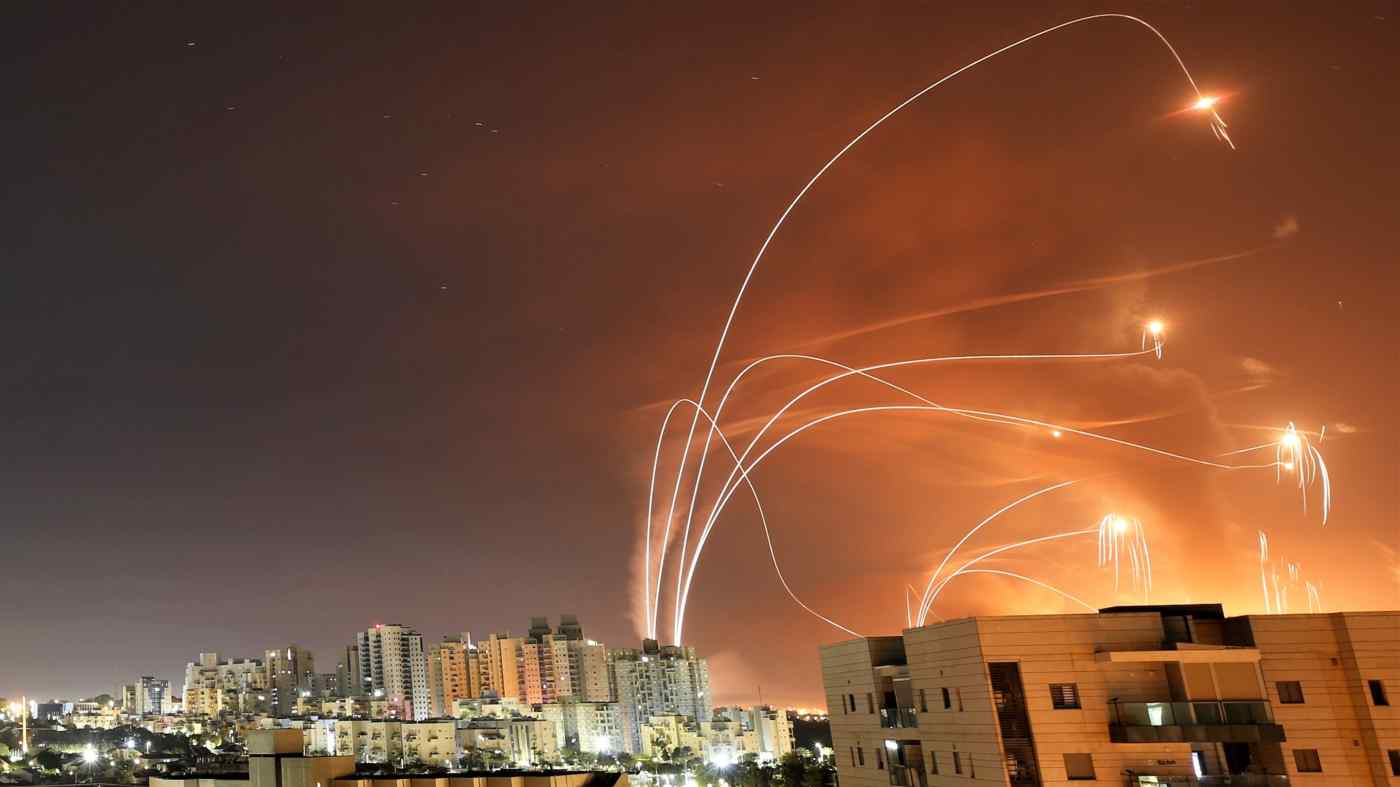 DUBAI/TOKYO -- The worst flare-up in the Israeli-Palestinian conflict in years has raised fears of a further escalation and prompted statements of grave concern from Asia.

What started with protests and physical clashes in Jerusalem has devolved into large-scale shooting this week, with the Gaza-ruling Islamist group Hamas firing hundreds of rockets into Israel and Israel Defense Forces aircraft pounding targets in the enclave.

Reports citing Gaza's Health Ministry said at least 43 people have been killed, including 13 children. In Israel, the death toll stood at six as of Wednesday evening Asia time, including an Arab Israeli father and daughter and a caregiver from India identified as Soumya Santhosh.

V. Muraleedharan, India's minister of state for external affairs, tweeted that he spoke with her family to express "deep condolences at her tragic demise during the rocket attacks from Gaza today." He said India has "condemned these attacks and the violence in Jerusalem, and urged restraint by both sides."

Likewise, Singapore's Foreign Ministry said it urges "all sides to take immediate steps to de-escalate the situation and work towards a durable ceasefire."

In Malaysia, which does not have formal relations with Israel and vocally supports the Palestinian cause, Prime Minister Muhyiddin Yassin released a statement on Wednesday: "Malaysia condemns in the strongest terms Israel's military airstrikes on the Gaza Strip ... which have resulted in multiple deaths and injuries to Palestinian civilians, including children."

Israel says its strikes are targeted at militants who operate from civilian areas, and that some casualties may be from Hamas rockets that fall short. A man surveys the damage after an Israeli airstrike in Gaza on May 12.   © Reuters

Beyond the bloodshed, the renewed hostilities threaten to diminish Israel's diplomatic gains from last year's Abraham Accords that established relations with the United Arab Emirates and Bahrain. Those deals prompted at least some speculation that growing Arab acceptance of the world's lone Jewish state might spur predominantly Muslim Asian countries like Indonesia and Malaysia to follow suit.

The fighting also raises the question of what role, if any, Asian countries could play in mediating the conflict -- a role long played by the U.S. As recently as late March, China floated a proposal to host new peace talks.

Bridging the Israeli-Palestinian divide, however, is notoriously complicated.

Several factors appear to have fueled the latest confrontation. One initial spark was a dispute over the Jerusalem neighborhood of Sheikh Jarrah dating back to Ottoman rule and a pending Israeli Supreme Court decision on evictions of six Palestinian families. This led to clashes between Palestinians and Israeli police who entered the Al-Aqsa Mosque compound or Temple Mount -- a holy site for both Muslims and Jews.

Indonesia's Ministry of Foreign Affairs weighed in on Sunday, blasting the planned evictions and saying it "equally condemns the use of force against Palestinian civilians in the Al-Aqsa Mosque complex."

But there may be much larger political issues at play. An Israeli police officer chases a man during clashes with Palestinians at the Al-Aqsa mosque compound in Jerusalem on May 10.   © Reuters

Israeli Prime Minister Benjamin Netanyahu has been unable to form a government after repeated elections, yet his rivals have so far failed to unseat him. Long-awaited Palestinian elections were postponed in late April, amid a bitter power struggle between Hamas in Gaza and a Palestinian Authority (Fatah) clinging to control of the West Bank. And Hamas, some are quick to note, enjoys backing from Israel's arch-enemy, Iran.

Ruth Wasserman Lande, a member of Israel's Knesset and former adviser to late President Shimon Peres, voiced fears of spiraling unrest in the political vacuum. "Without law and order and a coherent policy, do not be surprised if very soon the violence in the Arab street, which had long ago crossed all red lines, will flow into Jewish towns and cities," she told Nikkei Asia.

Then there is the matter of the Abraham Accords, which Palestinians openly resented.

"The Abraham Accords made explicit what everybody knew for a very long time, which is that most Arab governments don't care two pennies for the Palestinians," explained veteran diplomat Bilahari Kausikan, chairman of the Middle East Institute at the National University of Singapore. "They pay lip service to it. But the real concern now is Iran, and without Israel on their side, they're really quite powerless against Iran."

As a result, he continued, Fatah and Hamas risk being completely marginalized in the region. "It is in their interest to stir trouble in order to keep themselves relevant," he said. "The harsh fact is neither Fatah nor Hamas, nor the Israeli right, has any real interest in a settlement. Their interest is in a low level of conflict that can be dialed up or down as necessary. It is conflict that keeps them relevant."

Kausikan senses Iran may be pulling strings. "About a week ago, the commander of the Iranian Revolutionary Guard Corps, Hossein Salami, issued a very ominous statement that Israel is vulnerable because of its small size to a large-scale tactical operation," he said, noting that the "unprecedented" barrages of hundreds of rockets from Gaza could be described as just such an operation. Soldiers examine a building damaged by a rocket launched from Gaza in Ashdod, southern Israel, on May 11.   © Reuters

Fleur Hassan-Nahoum, the deputy mayor of Jerusalem, made a similar argument. "The current situation in Jerusalem was a planned escalation from Hamas, other Muslim Brotherhood [groups] and Iran," she said. "My plea for the Arab world is to follow the money. Who's giving [Hamas] money for these rockets? It is Iran."

Asked whether the tensions would hurt the appetite of Muslim Asian investors to do business with Israel, she said, "I don't think, long-term, this will impact budding commercial and business relations between Muslim Asian countries and Israel."

Others are less optimistic.

Although Israel lacks diplomatic ties with Indonesia and Malaysia, informal connections are considered a poorly kept secret, especially with the former. Samuel Ramani, a Middle East expert at the University of Oxford, suggested there was some merit to talk of the Abraham Accords leading to deeper relations, especially in the economic sphere. "Southeast Asia is a natural target region for Israel, as it seeks to build on the momentum" of the accords, he said.

Ramani argued that former Malaysian Prime Minister Mahathir Mohamad's departure from office in March 2020 created a slightly wider opening, "as his anti-Semitic rhetoric restricted cooperation with Israel." But he cautioned that democratic Malaysia and Indonesia are more sensitive to public opinion than the UAE and Bahrain, and stressed this week's violence will not help.

"The formalization of their relations with Israel was already unlikely and the events in Al-Aqsa, which both Indonesia and Malaysia have condemned, will make it even harder."

Fadi Elsalameen, adjunct senior fellow at the American Security Project and a Palestinian human rights and anti-corruption activist, said he does not think Muslim Asian investors will suddenly shun Israel's advanced technology. But he said the "Israeli provocation at Al-Aqsa mosque" would "set back any diplomatic efforts Israel has with Muslim Arab and Muslim Asian countries."

As for the question of de-escalating the conflict, Elsalameen rattled off a list of countries that could help: Egypt, Saudi Arabia, the U.S., U.K., Germany, France and Turkey. One country he did not include was China. In March, Chinese Foreign Minister Wang Yi floated a five-point plan for bringing peace to the Middle East as a whole. He told Saudi broadcaster Al Arabiya that "China will continue to invite peace advocates from Palestine and Israel to China for dialogue" and direct negotiations. He also pushed the plan while visiting Iran.

China has been keen to promote its Belt and Road initiative in the region, and Kausikan said Beijing could "sit pretty" as long as its engagement was primarily economic. "They could get into bed with Iran, Saudi Arabia, Israel. But if we take what Wang Yi said in Iran at face value -- that they want to play a bigger political or strategic role -- then I'm afraid you can't straddle this line anymore." 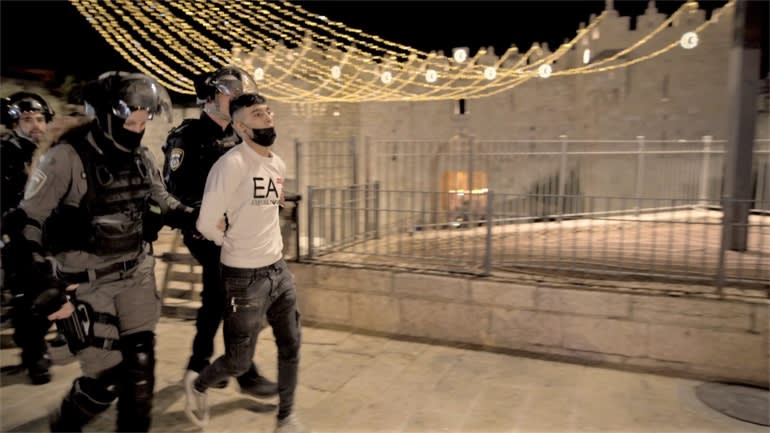 The more immediate concern is the impact on average Palestinians and Israelis, many of whom spent Tuesday night cowering under missile salvos.

"The health care system in Gaza is collapsing," said Gaza resident Suhair Zakkout, a spokeswoman for the International Committee of the Red Cross. "Hospitals do not have medical supplies to deal with the coronavirus crisis or the humanitarian war crisis."

For Zakkout, another worry was closer to home. "How do I explain to my children about the explosions?"