BEIJING -- Senior Chinese and Japanese officials discussed Friday a visit to Japan by China's President Xi Jinping in April, marking the first mention of a specific month for the high-profile trip.

"In principle, President Xi Jinping will make a state visit to Japan next spring," said Wang. "If successfully realized, it will have great impact and significance for China-Japan relations."

Kitamura said: "We want to have full bilateral discussions on issues around an April visit to Japan by President Xi"

Xi's trip would reciprocate a visit to China planned by Japanese Prime Minister Shinzo Abe for later this month. On that occasion, Xi will hold talks with Abe, Wang confirmed. 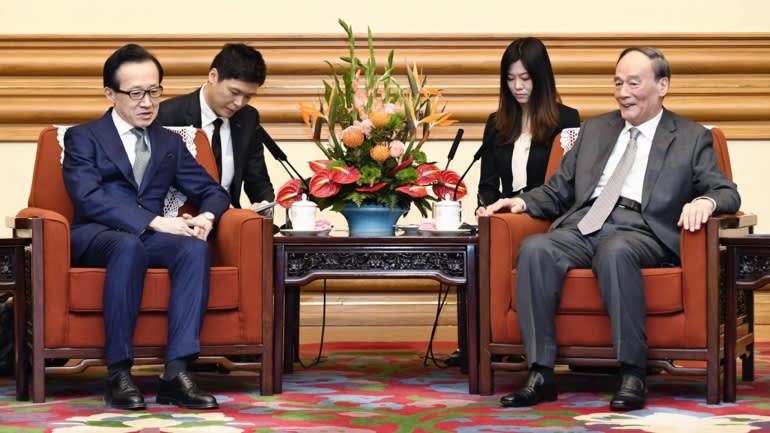 Abe is expected to meet with Xi in Beijing on Dec. 23, according to a diplomatic source. Tentative plans also call for Chinese Premier Li Keqiang, Abe and South Korean President Moon Jae-in to hold a trilateral summit the following day in the city of Chengdu, the source said.

This is the first visit to China by Kitamura since he became national security chief in September. "President Xi went out of his way to come and instruct me to meet with Mr. Kitamura by all means," said Wang.

Kitamura later visited the Diaoyutai State Guesthouse in Beijing to meet with Yang Jiechi, a member of the Politburo and China's top diplomat.

"The momentum for friendship between Japan and China is becoming extremely powerful," said Kitamura.

The China visit by Kitamura "has gained attention since he is one of Abe's close aides and there is a potential he will develop deep bilateral connections," said a Chinese diplomatic source. The fact that Kitamura is a former senior official for Japan's National Police Agency also appears to have been noticed in Beijing.

The two sides reached a breakthrough in 2014 by agreeing to a set of shared understandings, including the gradual resumption of political dialogue.