Collaboration to replace competition as guiding principle of relations 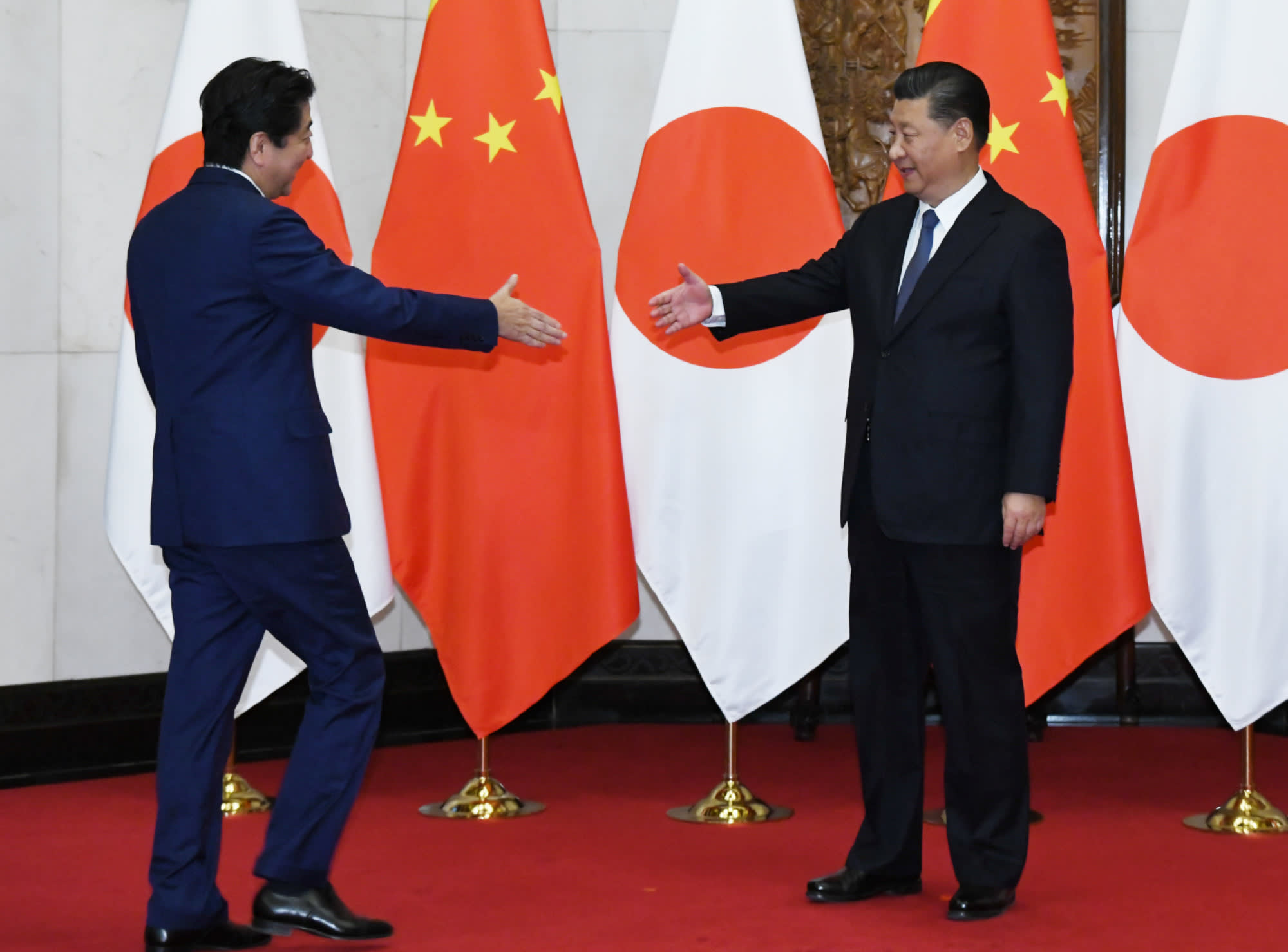 BEIJING -- From extending an early invitation to the 2020 Tokyo Olympics to promising to reconsider a ban on Japanese food affected by the Fukushima nuclear disaster, Japanese Prime Minister Shinzo Abe and Chinese President Xi Jinping worked at Friday's summit to repair relations that had deteriorated to their worst in decades.

"With concerted efforts by both sides, China-Japan ties are back on track and gaining positive momentum," Xi said. "This is worth cherishing."

But while the two countries took a giant leap forward in economic cooperation, on thornier security issues they remained at the level of baby steps.

The leaders agreed in an 80-minute meeting at Beijing's Diaoyutai State Guesthouse to accelerate cooperation on overseas infrastructure projects and finance as a symbol of their revamped ties.

Xi told Abe in his initial remarks that China and Japan should move bilateral relations to a "new historic direction." Abe proposed three principles for doing so: shifting from competition to collaboration, working together as partners that will not threaten each other, and developing a free and fair trading system.

"I want to combine our strengths based on these principles for peace and stability in the region and world," Abe said. And Xi, in sharp contrast to the stern face he wore when the two leaders met for the first time four years ago, at times let loose a smile at Friday's summit.

The Chinese side rolled out the red carpet for Abe this time, with Premier Li Keqiang hosting the Japanese leader at two meals. The two nations are demonstrating their "huge cooperation potential," Li said. 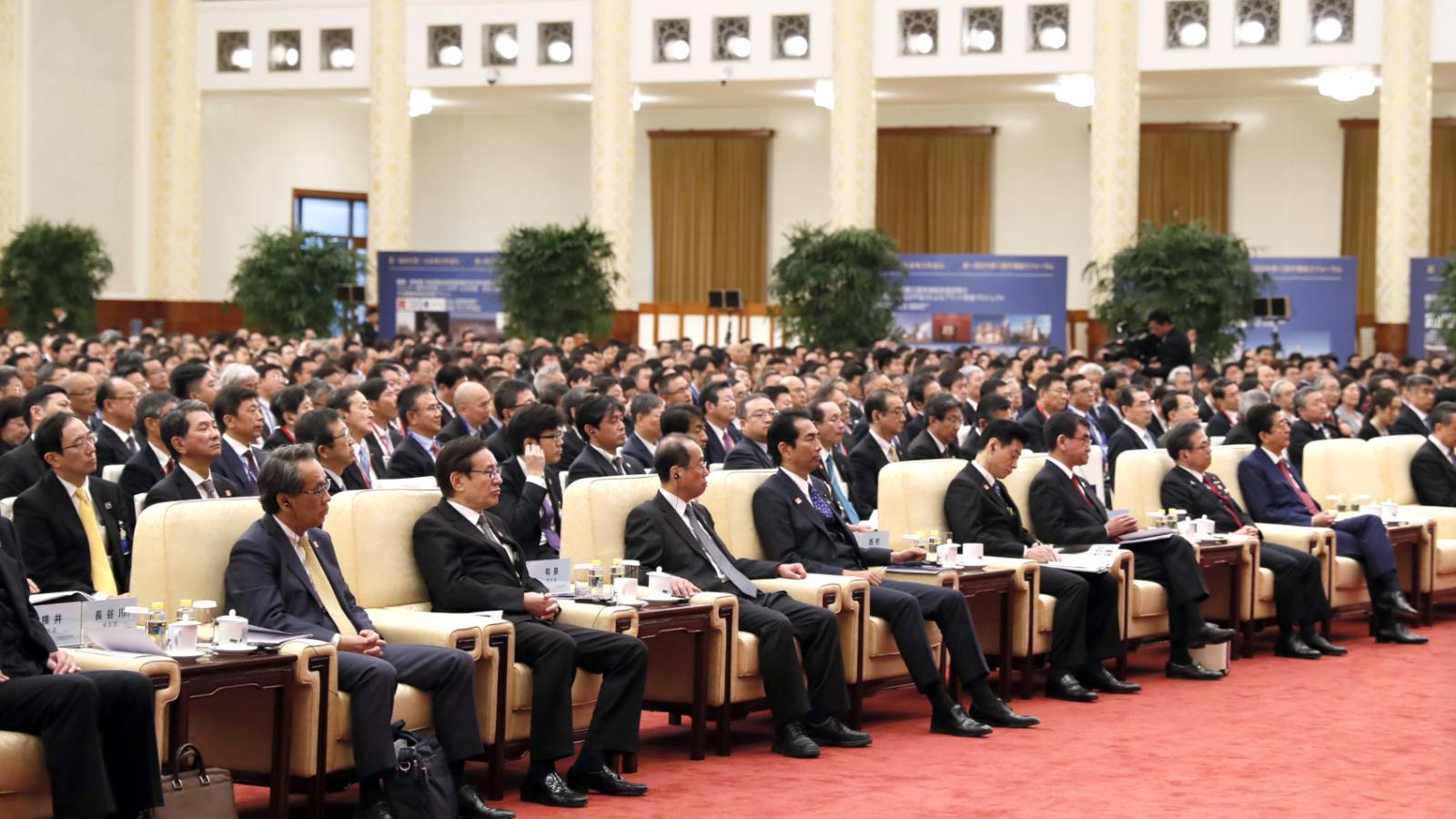 Economic cooperation dominated, with the two sides inking 52 projects related to jointly cultivating third-party markets. The headline project is the redevelopment of a Thai industrial complex into a smart city.

Xi is also considering making a trip to Japan next year, which would mark the first visit by a Chinese president since Hu Jintao in 2008. The meeting would likely come in late June, before or after the Group of 20 summit in Osaka.

While acknowledging that it may be too early, Abe asked Xi to attend the 2020 Olympics opening ceremony in Tokyo as well.

Sino-Japanese ties over the last decade had been at their lowest point since relations were normalized in 1972, triggered by tensions over the Senkaku Islands, which Japan administers but China claims as the Diaoyu. Leaders from either side avoided visits for seven years until Li went to Japan this past May.

Abe told Xi of Japan's intention to end an official development assistance program, begun in 1979, due to China's ascent to the world's second-largest economy. Xi praised highly the contribution the aid had made to China's development. Addressing the trade war, Xi said that the two countries must safeguard multilateralism, maintain free trade and open up the world economy as he tries to check U.S. President Donald Trump.

"Retaliatory measures do not benefit anyone," Abe said. "The U.S. and China should resolve their tensions through dialogue."

The leaders also discussed North Korea, confirming that they will work closely together on denuclearization and agreeing to enforce sanctions by the United Nations Security Council. Xi expressed support for Tokyo's stance on the quick return of Japanese abductees.

The countries also aim to resume talks on joint development of gas fields in the East China Sea and agreed to improve communication. China and Japan established a joint development zone near the median line between their territorial waters around a decade ago, but cooperation was suspended over the Senkakus.

Abe met with Li at the Great Hall of the People before his summit with Xi. The two sides agreed that their central banks would resume currency swaps in crises or other situations. They also signed a memorandum of understanding to strengthen cooperation between their securities markets, aiming to mutually list exchange-traded funds.

But concerns persist amid the flurry of cooperative projects. Beijing, which tends to prioritize appearances, is more focused on the number and monetary value of deals than their implementation. Xi and Trump inked huge deals during their summit a year earlier, but most of the projects have been shelved.

There was also some progress on security issues. Both sides agreed to hold their first meeting between defense officials as early as this year to deepen communication in order to prevent accidental clashes.

Yet the two sides still could not agree on when to open a hotline, although the issue has been on the table for months.

There was also little clarity over the issue of Chinese boats entering waters near the Senkakus. "This was a half step forward," a high-level Japanese official said. "We aim for significant progress when Xi visits Japan next year."