VLADIVOSTOK, Russia -- Chinese President Xi Jinping is digging in for a prolonged trade war with the U.S. by stepping up his campaign to recruit allies in Russia this week.

Xi is making his first-ever appearance at the Eastern Economic Forum, which started here Tuesday and ends Thursday. Meeting with Xi on the sidelines Wednesday, Japanese Prime Minister Shinzo Abe agreed to visit China next month. Xi told Abe at the start of that summit that they share a common desire to continuously develop bilateral relations.

October's trip is premised on Abe winning re-election to a third term as president of the ruling Liberal Democratic Party on Sept. 20.

It is unusual for the Chinese leadership to mention a summit more than a month in advance. "I have never seen Xi look so happy at a China-Japan summit," said an official who attended Wednesday's meeting. 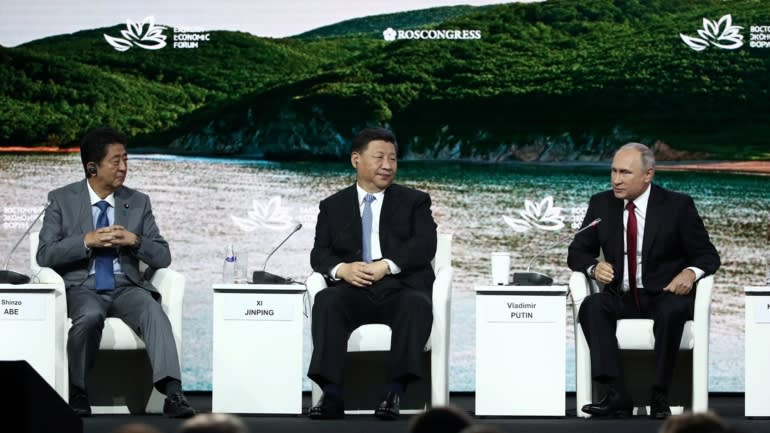 Chinese President Xi Jinping, center, sits with Japanese Prime Minister Shinzo Abe and Russian President Vladimir Putin. He met with each leader on the sidelines of the Eastern Economic Forum this week.   © Reuters

With the Chinese leadership expecting a protracted trade war, Xi hopes to find an ally in Japan to counter the U.S. should Trump target Japanese automotive products. He is also promoting warmer ties with Tokyo because China will rely on technology from nations like Japan and Germany if Washington bans high-tech exports to Chinese companies.

At last October's congress of the ruling Communist Party, Xi said a stable international environment is essential for addressing domestic issues, prioritizing relations with the U.S. But Washington threw a wrench into this strategy in December when the Trump administration said China challenges "American power, influence, and interests, attempting to erode American security and prosperity," and took a harder line on Beijing. Xi's next-best course of action was to make friends with other countries.

China first mended fences with India. The two neighbors' armies were involved in a three-month border standoff last summer that threatened to create a two-front war for Beijing if rekindled. Xi therefore agreed to improve conflict avoidance strategies in the region at an informal summit with Prime Minister Narendra Modi in April. The two leaders also demonstrated their thawing relationship with a lakeside stroll.

Xi has also reached out to Europe, whose relationship with the U.S. is strained at the moment. Keeping the continent's emphasis on human rights in mind, Xi allowed Liu Xia -- the widow of imprisoned dissident Liu Xiaobo, who died under guard in a hospital last year -- to leave China after her husband's passing. German Chancellor Angela Merkel requested the move when visiting China in May.

Beijing is not ignoring the risk of a drop in imports from the U.S. either. Xi called developing countries "natural allies" and is working to strengthen relationships with resource and food suppliers in Africa, South America and the Middle East.

China pledged $60 billion in economic assistance to Africa at the Forum on China-Africa Cooperation summit on Sept. 3. Putin, who met with Xi on Tuesday, also expressed pleasure that Russia-China trade is expected to reach or exceed $100 billion this year, mainly from energy.

But Xi said China will also firmly defend its territory and sovereignty. The country continues to militarize the South China Sea, over which it claims control, despite advocating multilateral diplomacy.

China also seeks to expand its influence through the Belt and Road Initiative development strategy, which threatens to saddle Southeast Asian and African countries with heavy debts in the name of economic cooperation.

By strengthening ties with Japan and Europe, Xi aims to check the U.S. and draw a compromise on the trade war. But while Xi may be showing a friendlier attitude, the world still has reason to be wary of Beijing. On Wednesday, the day Xi smiled with Abe, it was confirmed that four Chinese ships entered the contiguous zone around the Senkaku Islands, which Japan administers but China claims as the Diaoyu, for the first time in five days.