Hardline conservative favored to win poll that has regional ramifications TOKYO -- An ultra-conservative candidate appears set to win the presidential election in Iran, after several moderate candidates were barred from running.

Voters began casting ballots on Friday in a poll that will have ramifications both domestically and across the region. The result is expected in the next few days.

Four candidates, three of them hardliners, are competing to replace incumbent President Hassan Rouhani. The favorite, Judiciary Chief Seyed Ebrahim Raisi, has been campaigning on a promise to fight corruption and improve the country's battered economy.

Raisi, 60, has served in the judiciary for nearly 40 years. His name is linked to mass executions in 1988, when as a deputy prosecutor, he reportedly oversaw the killing of some 5,000 prisoners. He has denied any involvement.

He "may be the favored candidate of the largest segment of conservative elites and their base," said Farzan Sabet, a researcher at the United Nations Institute for Disarmament Research. A Raisi presidency would mean that, for the first time since the mid-2000s, "the three branches of government and major unelected centers of power in Iran will be more or less unified under conservative control," Sabet added.

Former Central Bank director Abdul Naser Hemmati is one of the only two candidates from the moderate camp to make it through the Guardian Council's vetting process. The other one withdrew on Wednesday.

An economist by training, Hemmati's promise is to open up the oil-producing country's doors to the world and address the numerous issues that have plagued the economy.

The former government official has spoken about how difficult it has been under sanctions imposed during Donald Trump's administration to sell Iran's vital crude oil and receive funds.

"Raisi hasn't performed particularly well in the debates," said Esfandyar Batmanghelidj, a Visiting Fellow at the European Council on Foreign Relations. "He doesn't seem to have very clear answers for the issues that are most important to the voters," particularly Iran's economic recovery, Batmanghelidj added

All of these make him a less compelling candidate compared to Hemmati, "who can point to actual experience managing aspects of the country's economic crisis," he said.

Still, "every indication shows that Raisi will prevail in the election. But this is not a reflection of his strength as a candidate. It's a reflection of the strengths of the political machine behind him," Batmanghelidj said. But Rouhani's honeymoon did not last long as Donald Trump, a fierce critic of the deal, took office in 2017. The following year, Trump pulled Washington out of the accord, and Iran's economy has been reeling from sanctions introduced under Trump's "maximum pressure" campaign.

With Joe Biden as U.S. president, the two sides are now carefully walking back the ruptions created by Trump. With Europeans playing mediator, Iran has engaged in indirect talks with the U.S. in Vienna aimed at reviving the deal.

But Rouhani's spokesperson Ali Rabii said last week that nuclear policy probably won't change with a change of governments. "The nuclear issue in Iran is decided through consensus within the Islamic republic and is not linked to domestic developments," he said. 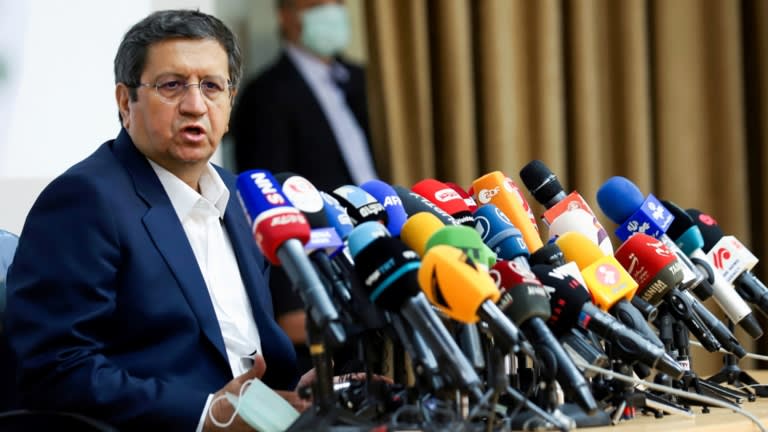 The sanctions have left a scar on the economy. Inflation stood at 36.5% last year and will rise to around 39% this year, according to the International Monetary Fund. High unemployment also means that despite the IMF forecasting a modest recovery, Iranians are still astonished at the skyrocketing prices of daily essentials.

Waves of fatal protests have swept the country over the past few years. The last of which came in late 2019, when dozens to hundreds of people reportedly died in a crackdown by security forces.

Turnout is predicted to be low, with many frustrated voters saying they will boycott the elections on social media and the street, citing political, economic, and social reasons. Videos of open mics set up in communities across the country have shown many speakers taking the microphone to call on others to refrain from participation.

Only 42% of those surveyed by the Iranian Students Polling Agency (ISPA) on June 13 and 14 after the third and final televised presidential debate said that they would vote. That stands in stark contrast to the 73% turnout in 2017 when Rouhani won.

The president's first deputy, reformist Eshaq Jahangiri, ran as a candidate next to Rouhani in 2017 polls and stepped down in his favor at the last minute. But last month, the Guardian Council decided he was not fit to run again.

Many were also surprised when former parliament speaker Ali Larijani, a centrist conservative politician, was disqualified. He oversaw the parliament from 2008 to 2020.

The disqualifications underscored how Iran's political elite view the elections. This week, a former intelligence minister revealed how he decided to recommend one of the founders of Iran's 1979 revolution be excluded from the 2013 elections, after indications by "word on the street" that he would emerge as the winner.

The barred candidate was late Ayatollah Akbar Hashemi Rafsanjani, who later threw his support behind Rouhani and propelled him to his first term in office.

"I did a cost and benefit analysis and concluded in a report that to save the [Islamic establishment], Ayatollah Rafsanjani should not be allowed to run," Heydar Moslehi said in a video published by local media on Monday.

"I don't speak about individuals, here," Moslehi said to the elites sitting on the Guardian Council in 2013, according to his own account. "This is the cost to save the establishment."

Moslehi's claims have also been refuted by the Guardian Council, and he himself said his comments had been "incomplete."