Is Abe raising threat of snap election to quiet opponents? The Diet building in Tokyo.

TOKYO -- With passage of a contentious anti-conspiracy bill in peril, Prime Minister Shinzo Abe is reportedly considering extending the parliamentary session to allow more time. But some see this as part of Abe's ploy to quiet dissenters by fueling talk of a snap election. 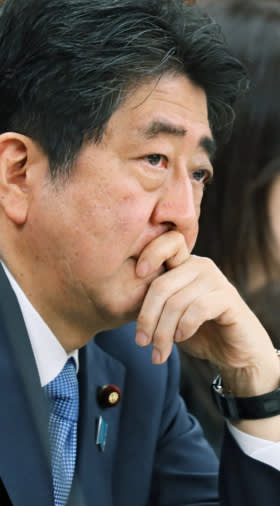 Given that a Tokyo metropolitan assembly election is scheduled for early July, a significant extension of the Diet session, ending June 18, had not been considered an option. The apparent strategy shift has sent lawmakers and pundits scrambling to figure out Abe's true motive.

The controversial legislation would change the criteria for what constitutes conspiracy and criminalizes the act of plotting such crimes as terrorist attacks. The government and the ruling Liberal Democratic Party seek speedy passage, citing the need for terrorism countermeasures ahead of the 2020 Olympics in Tokyo.

But the opposition Democratic Party and Japanese Communist Party have railed against the bill, arguing that it infringes on freedom of thought, which is protected by Japan's constitution. The parties have led protests against the measure, evoking the past instances of the Abe administration ramming controversial legislation through the Diet, including the 2013 state secrets law and sweeping security bills passed in 2015.

The situation is leaving Komeito, the LDP's junior coalition partner in the Diet, increasingly jittery. In the July 2 Tokyo metropolitan assembly election -- which the party considers as much of a priority as national polls -- Komeito has resolved to throw in its lot not with the LDP, but with the rival faction of Gov. Yuriko Koike. Komeito would also privately prefer to break with its Diet ally on the conspiracy bill, which threatens to spark a public backlash.

Given such a treacherous political landscape, the odds of passage before the end of the Diet session slim. The LDP's initial plan called for getting the legislation through the lower house before the Golden Week holidays starting late this month, then enacted in May, but the process is already a week behind schedule. Justice Minister Katsutoshi Kaneda's fumbled explanations of the bill also have not inspired confidence. Some see the legislation passing the lower house no sooner than late May, leaving little time before the session is slated to close.

There is precedent. Tokyo metropolitan assembly elections have been held during Diet sessions in the past, and thus a Diet extension in theory is a possibility. Delaying a vote until after the election would also let Komeito save face.

A matter of timing

But this is not the only message an extension would send.

Upon hearing that Abe could have the Diet remain in session during the Tokyo poll, political insiders are naturally considering the possibility of Abe calling a lower house election at the same time.

The prime minister may dissolve the lower house at any time while the Diet is in session. Though the constitution permits doing so during a recess as well, this has never occurred under the current constitution.

Lower house legislators are more than halfway through their four-year terms, which are due to end in December 2018. Abe has reportedly considered dissolving the chamber in the first half of this year. An extension would give him more options with regard to timing.

Talk of an election has already muted LDP frustration with Abe over a scandal surrounding nationalist school operator Moritomo Gakuen that has entangled the prime minister's wife. Backbiting by LDP lawmakers has died down amid worries that drawing Abe's ire could prove dangerous on the off-chance an election is held.

Another consideration is the impact on the Tokyo election, where the LDP's popularity is lagging well behind Koike's. A double election would lessen interest in the metropolitan vote. LDP lawmakers could ride Abe's still-buoyant personal popularity to victory.

Implicit threats of snap elections have been part of Abe's toolbox for dealing with crises for some time. When ruling and opposition parties clashed over the controversial security legislation in 2015, Abe had the regular Diet session extended until late September and hinted that he could dissolve the lower house. He ultimately chose not to do so, and the bills passed.

This is not Abe's only option. Even if the prime minister lets the Diet session end in June as scheduled, he could hint at plans to reshuffle his cabinet, which would have a similar effect in terms of solidifying his leadership. Talk about the possible revamp could siphon off attention from the Tokyo election.

A misstep with either tactic would risk exposing Abe to criticism from the opposition. But his cabinet remains popular despite the school scandal, with an approval rating in the 50-60% range, meaning the prime minister still has plenty of options at his disposal.

Though Abe looks likely to remain unchallenged at the top for now, the political world is full of unexpected pitfalls. He told party members in January that he is fully mindful of the risk of complacency.

At an opening ceremony Monday for a new retail complex in Ginza, Abe noticed that his prepared speech made no mention of products from his home prefecture of Yamaguchi. This prompted a spontaneous joke related to the Moritomo Gakuen affair, which turns in part on the question of whether bureaucrats sought to preemptively act on what they perceived to be the wishes of the prime minister's office.

"You should anticipate [my thoughts] better," he said.