Locals look on as floods hit the Jatinegara area of Jakarta after heavy rains in this Jan. 2 photo. Dozens of people have died in the deluge.   © Reuters
SHOTARO TANI, Nikkei staff writerJanuary 9, 2020 15:36 JST | Indonesia
CopyCopied

JAKARTA -- The governor of Jakarta's chances of succeeding Joko Widodo as Indonesia's next president have been hit by his handling of floods that have killed dozens in the capital.

Anies Baswedan, education minister in Widodo's first cabinet in 2014, enjoys strong support from Muslim hard-liners who are looking to back him in the 2024 presidential race.

But the broader public may be dissuaded from supporting him after seeing the floods that displaced tens of thousands of people. Some residents are preparing a class-action lawsuit against the governor, according to local media.

"To run [in the presidential election] is still very possible with supporters with Islamic background affiliated with the [Islam-based party] PKS," said Ray Rangkuti, a political professor at Syarif Hidayatullah State Islamic University in Jakarta. "So far, his strategy for gaining popularity is segmented toward his existing supporters or the Islamic groups" rather than the general public.

The death toll from the flood has risen to 67 as of Jan. 6, with more than 30,000 people displaced. Floods are common in Jakarta at this time of year, and are part of the reason for moving the national capital. Widodo has blamed the severity of the disaster on delays in flood control projects.

The public criticism of Baswedan stems from a reported cut in the provincial government's budget for flood management in 2019. Of the 850 billion rupiah ($61 million) initially allocated, only 350 billion had been disbursed by November, local media said. The remaining 500 billion was not used because of Jakarta's budget deficit.

Because of this, a plan to "naturalize" -- -- relocating residents and developing open green space near rivers -- 118 plots of land on riverbanks in the north of the city was postponed.

Baswedan has refuted the claims, saying the regional government has not made any decisions to cut the budget. 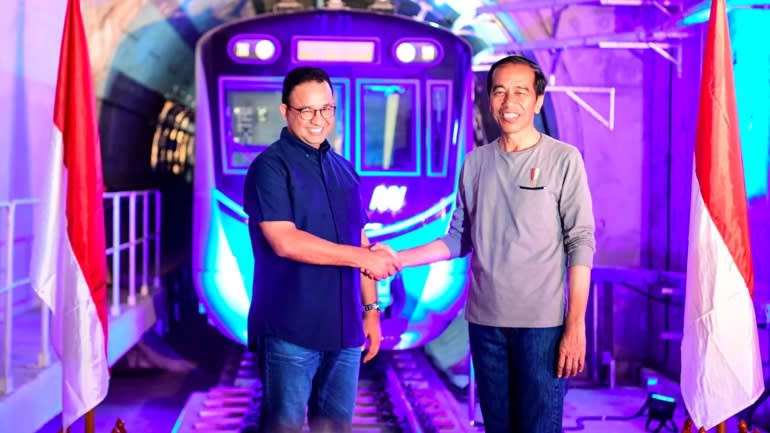 Nevertheless, the public remains outraged -- a mood exacerbated by Jakarta allocating 1.6 trillion rupiah to host Formula E electric car races in the city. Baswedan's comments that children are "happy" to play in the water during floods also angered many Jakarta residents.

"@FIAFormulaE, I would like to ask your conscience to cancel Jakarta as a host," said one angry Twitter user. "The budget for being a host is taken from some posts that [are] far more important to Jakartans. @aniesbaswedan has no heart to cut flood control budget just for hosting the race."

Some observers say that in his two years in office, Baswedan has only made meager progress on tackling Jakarta's issues such as chronic traffic jams, waste disposal and flooding mitigation. He came under attack from some Jakarta residents for constructing more sidewalks in the capital, creating worse traffic conditions, and environmentalist groups are angry about the cutting down of trees.

"Baswedan's main concern on beautifying Jakarta is very superficial and apparently disappointing to so many people," said Rangkuti of Syarif Hidayatullah State Islamic University. "Instead of working on preventing floods, he was focusing more on building more sidewalks and decorating the crossing bridges."

Baswedan came to power in 2017 when he won a controversial gubernatorial election. He defeated the incumbent Basuki Purnama, an ethnic Chinese and a Christian who was, before the election, accused of blaspheming the Islamic holy text of Quran and jailed for two years.

Widodo, himself, used the governorship of Jakarta as a steppingstone to winning the presidency in 2014.