JAKARTA -- Malaysia's environment minister is sure that 2017 will not see a repeat of the choking, eye-watering smog that covered parts of his country, as well as Singapore and areas in Indonesia, for around two months in 2015.

"We are very likely to be haze-free this year. Even if it comes, it will not be as serious as before," said Wan Junaidi Tuanku Jaafar, Minister for Natural Resources and Environment, on March 2.

Mostly caused by the burning of peatland and forests to clear land for plantations in Indonesia, Southeast Asia's haze has for three decades been a near-annual blight that makes air in Kuala Lumpur and Singapore, two of Asia's most dynamic cities, almost unbreathable and in turn, diminishes economic output.

Prolonged bouts of the haze, such as in 1997 and in 2015, caused diplomatic ructions as Singapore railed against neighboring Indonesia over the impact of the pollution on its citizens and their livelihoods.

But a new Indonesian government-backed alliance of farmers, businesses, environmentalists and concerned citizens aims to prevent more debilitating blazes in southern Kalimantan and western Sumatra, home to much of Indonesia's lucrative palm oil and pulpwood sectors.

"The Indonesian government is very serious on tackling the forest fires," said Prabianto Wibowo, assistant deputy minister for forestry at Indonesia's economic co-ordination ministry, speaking at the Responsible Business Forum in Jakarta on March 15. As well as damaging relations with Singapore, 2015 fires cost Indonesia's economy an estimated $16bn according to the World Bank. 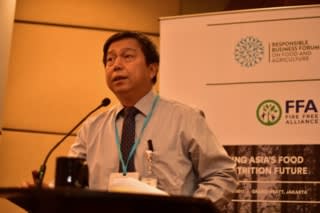 It was announced at the forum that Malaysian plantation operators Sime Darby and IOI Group -- which has been embroiled in a long-running land rights dispute in Sarawak in Malaysia -- will join the year-old Fire Free Alliance, a collaboration that "focuses on fire prevention through community engagement."

The FFA is made up of environmental groups and major forestry and agriculture companies such as pulp and paper giant Asia Pacific Resources International, or APRIL, as well as major palm oil players Musim Mas Group and Wilmar International.

The flammable peat soil -- which makes up 11% of Indonesia's land area -- can burn for weeks and its effects can be deadly. Some estimates suggest that 100,000 deaths were related to the last major bout of haze in 2015 -- fires that were exacerbated by hot dry weather caused by El Nino, a recurring climate pattern on the southern Pacific Ocean that sometimes brings dryer, warmer weather than usual to nearby countries. 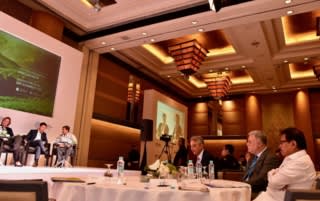 Sofyan Djalil, Indonesia's minister for agrarian and spatial planning, right, watches in the audience as a panel discusses how the Fire Free Alliance can curb Indonesia's peat forest burning (Photo by Simon Roughneen)

Governments disputed that death toll, saying it was impossible to attribute mortality in every case to the acrid air caused by the fires. Nonetheless, pollution levels typically jump way above what is deemed safe when Indonesia's forests are burning. In 2015, for example, Malaysia's air pollution in areas affected by the drifting smoke was 10 times the level that the World Health Organization says causes premature deaths.

"It has an impact on people's health, and on the economy and on tourism," said Aurelie Charmeau, director of research at the Singapore-based People's Movement Against Haze. "I avoid going out during this haze, you smell it, you can feel it, it is more difficult to breathe."

But there is a long way to go before Indonesia is likely to be described as fire-free. So far, the FFA takes in just over 200 villages covering roughly 1.5 million hectares of land -- just over a quarter of what the government estimates to be 731 villages in 7 of Indonesia's 34 provinces where burning takes place.

"I do believe if we get more companies involved it will be a success," said Lucita Jasmin, director of sustainability and external affairs at APRIL, referring to the FFA. But she acknowledged that "there is no target date for getting the 700-plus villages involved."

Indeed getting everybody on board will be challenging, as setting fires to forests -- a modern version of the ancient practice of slash-and-burn clearances -- is seen as the cheapest way to clear land for new plantations.

"Engaging with communities and changing behavior takes time," said Jasmin. Indonesia is home to thousands of plantations run by smallholders who have meager resources to clear their plot of land to make way for lucrative cash crops.

According to a 2012 report by consultancy PricewaterhouseCoopers, such small landholders account for about 38% of Indonesia's palm oil plantations. "You cannot just say to the communities 'don't do that' without offering an alternative," Jasmin said.

To help address the misuse of the vast archipelago's terrain, Indonesia's government is currently drafting a new land law, according to Agrarian and Spatial Planning Minister Sofyan Djalil.

Speaking at the Responsible Business Forum, Djalil did not address the haze issue, possibly because Indonesia's forests are the domain of a separate ministry, and many of Indonesia's plantations are still considered part of the officially forested area.

"How much forest does this country need?" Djalil asked. "We have to address this issue and promote economic development for smallholders."

Attempting to overturn some of the impact of the now decades-old burning, in 2016 the Indonesian government established the Indonesian Peatland Restoration Agency, which aims to restore 2 million hectares of degraded peatlands in seven provinces over a five-year period. President Joko Widodo will meet leaders of Indonesia's indigenous forest communities in northern Sumatra on March 17, where those leaders are expected to ask the president to make good on his pledge to return 12.7 million hectares of land to community ownership -- a move campaigners say will help preserve forests and curb pollution.

But demand for palm oil has seen the sector expand dramatically in the last two decades. Growth is likely to continue, putting further pressure on land and forests and adding to the incentive for cash-strapped farmers or landholders to slash and burn and in turn grow oil palm.

A palm oil market analysis published by Zion Market Research last year put the value of the global market at $65.73 billion in 2015, and $92.84 billion by 2021. Once mainly used for cooking, the versatile palm oil is now a vital ingredient in everyday products such as shampoo, lipstick, chocolate and ice-cream. Indonesia and Malaysia are sources of more than 80% of the world's palm oil and the product is Indonesia's third biggest export after coal and gas.

Despite its utility and ubiquity, palm oil has been described as "the world's most hated crop" due to its links to deforestation and pollution. If the FFA can help curb the torching of Indonesia's forests, it will do much to offset this bad publicity and to preserve the archipelago's ecology and biodiversity.

Indonesia's rainforest is the world's third largest after Brazil and the Democratic Republic of the Congo, but forest pyrotechnics have reduced it drastically. A 2014 report by the University of Maryland calculated that Indonesia lost more than 6 million hectares of forest between 2000 and 2012 and has seen its forest loss overtake that of Brazil's Amazon, an area of jungle four times larger.

Such destruction is making life difficult for some of the world's rarest animals as habitats have been destroyed to make way for plantations, with the International Union for Conservation of Nature in mid-2016 classifying Borneo's orangutans as critically endangered.

As well as persuading smallholders to stop slash-and-burn, public pressure on bigger companies could also yield results. The 2015 haze crisis spawned the "We Breathe What We Buy" campaign in Singapore that targeted products linked to Indonesia's forests. The campaign urged customers to buy only palm oil and wood-based products from sustainable sources -- putting the spotlight on FFA members such as APRIL, Wilmar International and Musim Mas, which have headquarters in the city state.