TOKYO -- In winter, when the Sea of Japan is constantly battered by freezing winds and fierce waves, wooden fishing boats from North Korea frequently wash ashore in northern Japan. Authorities suspect these vessels -- typically rickety and deserted -- are involved in illegal fishing operations in Japanese waters.

The Japan Coast Guard in November launched a special patrol unit to handle the wayward "ghost ships" that wash up on Japanese shores. It operates from Ajigasawa, a town of about 9,000 residents in the northern prefecture of Aomori.

The team consists of 10 officers who patrol the prefecture's coast in search of suspicious boats. It also responds to reports from residents, and searches and secures the area around such vessels.

The number of derelict boats has been rising. "That is in part because North Korea recently sold fishing rights around its own coastal areas to China," said Mitsuhiro Mimura, a researcher at the Economic Research Institute for Northeast Asia. "So North Korean fishermen have to risk their lives farther out at sea by operating in poorly equipped wooden boats." In one instance, the Coast Guard unit found a boat on a deserted beach. The 14 meter-long, three meter-wide boat was covered with black tar, with Hangul letters clearly visible.

"A boat like that wouldn't stand a chance if it hit rough seas," said one of the unit members. "I definitely wouldn't want to set out on that."

If North Korean crew members end up on Japanese soil, they could pose a safety hazard to local communities. The patrol members not only search and inspect the boats, but also look for signs of landing, such as the remains of fires. The temperature in the area sinks well below freezing at night, so fishermen would try to keep warm with a fire if they were stranded.

The number of beached boats increases in November and December due to rougher weather, and the unit receives reports of suspicious vessels almost daily.

"I have a grandchild in elementary school, so if someone were to land ashore, it's a scary thought," said a 66-year-old resident of Fukaura, another town along the coast in Aomori. "The coast guard patrols are reassuring." This wooden boat washed ashore with no one on board in Tsugaru, Aomori Prefecture. The boat's crew may have drowned after being thrown into the sea in stormy weather. (Photo by Kai Fujii) A sticker is placed on a checked wooden boat and the vessel is conspicuously marked with spray paint in Tsugaru, Aomori Prefecture. These measures inform anxious local residents that the safety of the boat has been confirmed. (Photo by Kai Fujii) Aomori Prefecture's coast, like this stretch near the town of Fukaura, is complex. The prefecture's coastline on the Sea of Japan spans almost 200km. (Photo by Kei Higuchi) 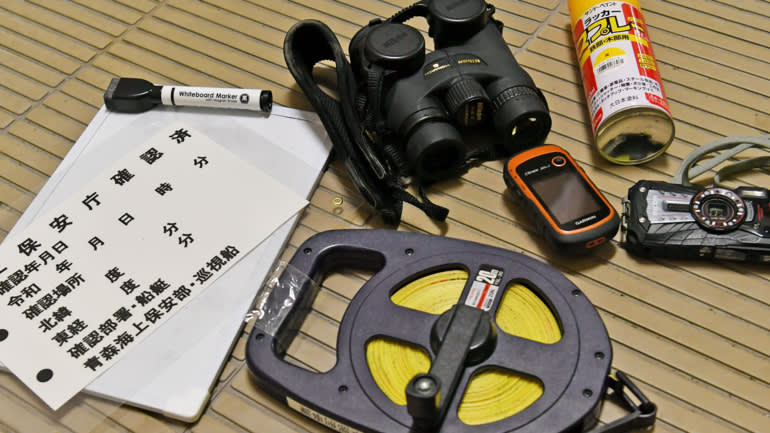 Key items that members of the Aomori Coast Guard Office's Mobile Surveillance Unit carry include binoculars, which are essential because the ghost boats are sometimes discovered in inaccessible areas, such as under cliffs and in rocky areas. (Photo by Kai Fujii) Members of the Aomori Coast Guard Office's Mobile Surveillance Unit speak with a local resident in the town of Fukaura. (Photo by Kei Higuchi) The surrounding area was strewn with wreckage from this vessel that washed ashore in Tsugaru. (Photo by Kei Higuchi) 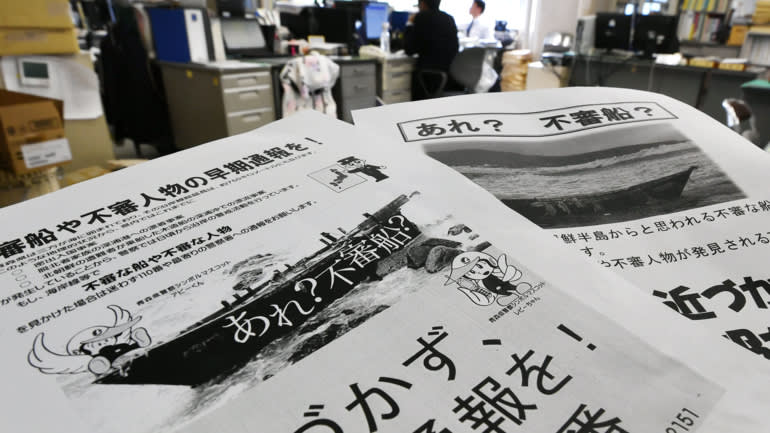 In Ajigasawa, the town government and police hand out cautionary fliers to neighborhood associations. (photo by Kai Fujii) The Sea of Japan turns rough in winter. (Photo by Kai Fujii)

The unit is in charge of six cities and towns along a 200km stretch of coast.

It is the local governments' responsibility to actually remove the boats. An official in Ajigasawa said that since the town's budget is small, it relies on support from the prefectural government to cover the costs. It can take as long as two to three months to remove a boat because the town has to wait for money from the prefecture.

Sakata, a port in Yamagata Prefecture, another northern prefecture facing the Sea of Japan, is known as a squid fishing hub. Every year it brings in one of the largest overall catches of Japanese common squid. But the haul has plunged to 220 tons this year from about 2,300 tons three years ago.

There are various factors behind the decline, including environmental changes, but North Korean fishing is one of them, according to one local fisherman. "A sharp drop in the catch is a matter of life and death for local fishermen," he said. "Also, we could capsize if we got tangled in their nets. It's a life-threatening situation."