TOKYO -- Japan's next prime minister is to be elected in a special session of parliament to be held as early as Sept. 17, according to plans within the ruling Liberal Democratic Party.

Following Shinzo Abe's decision to step down, the LDP has begun preparations to vote for its next leader by Sept. 15. The party's General Council will meet Tuesday to decide how and when the process will take place.

Chief Cabinet Secretary Yoshihide Suga, Abe's right-hand man, has decided to seek the top spot, Nikkei has learned. The party's powerful factions are starting to throw their support behind him. Members of parliament who support his bid will gather today for a meeting.

Though Suga trails in voter polls behind such other likely candidates as Ishiba and Defense Minister Taro Kono, Suga is seen as a steady hand who can maintain policymaking continuity and spare Japan from another succession of short-lived governments like those before Abe.

Suga told aides Sunday that he wants to focus on "tackling the coronavirus and the economy."

LDP Secretary-General Toshihiro Nikai said over the weekend that he would support Suga in the party leadership race. A senior member of the Hosoda faction, the largest grouping in the LDP, described Suga as "a leading candidate."

The chief cabinet secretary, as the head of the cabinet secretariat, sits atop Japan's powerful Kasumigaseki bureaucracy. All of the current career bureaucrats leading the ministries have been installed by the Abe-Suga team, and the influence Suga enjoys is unrivaled by the other candidates.

Winning support from party factions will be crucial for Suga, who does not belong to one himself.

Takeo Kawamura, a high-ranking member of Nikai's faction, said after a meeting of senior faction officials Sunday that there is a "growing atmosphere" of support for Suga, seen as a solid choice who can "carry on the work of the current administration."

Support for Suga is broadening within the Takeshita faction as well, while lawmakers unaffiliated with a faction who back Suga will meet Monday to affirm their support. Contenders for LDP leadership are expected to announce their intentions early next month.

But voters appear to favor other candidates.

A Nikkei/TV Tokyo poll conducted over the weekend put Ishiba, a former defense minister, in the lead at 28%, followed by Kono at 15% and Environment Minister Shinjiro Koizumi -- son of former Prime Minister Junichiro Koizumi -- at 14%. Suga came in fourth at 11%, followed by former Foreign Minister Fumio Kishida at 6%.

Looking at just LDP supporters, the top two remained the same, but Suga led Koizumi 16% to 13%.

Asked to assess Abe's nearly eight years in office, 74% approved of how he handled the job, triple the 24% who disapproved.

Kishida met with Abe on Monday to seek support for his run -- a day after he tried to convince party heavyweights including Taro Aso, Abe's deputy prime minister and leader of the LDP's second-largest faction, to back him. 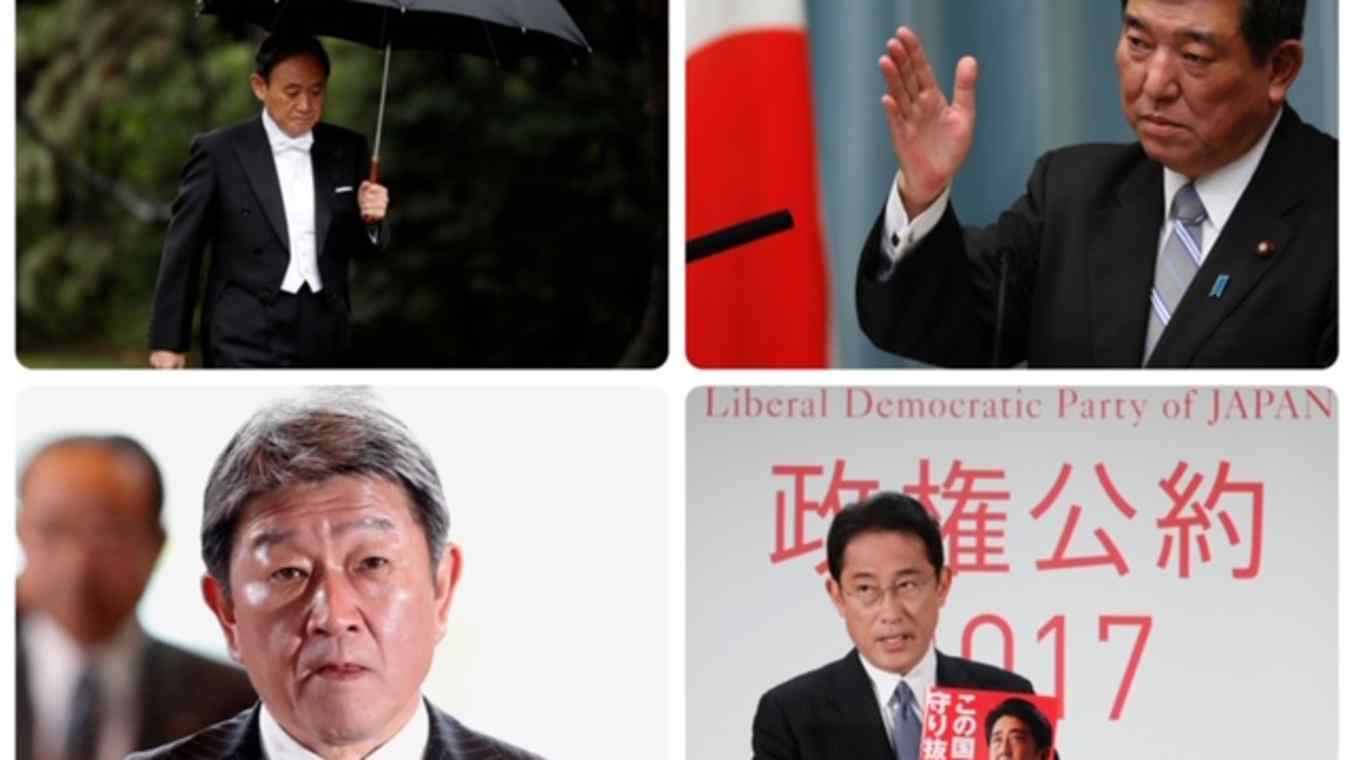 Though Ishiba has expressed interest in running, he told reporters after a speech Sunday that he will wait to see how the party intends to conduct the vote before making a decision.

LDP elections normally are held at the end of a party leader's three-year term, and the voting involves lawmakers in parliament as well as rank-and-file party members, with both groups having an equal number of votes.

But for an emergency election following a resignation like Abe's, the party can limit the voting to just lawmakers and a much smaller set of prefectural representatives.

Ishiba advocates the former option. The latter, which puts much more weight on parliamentarians, requires cobbling together a majority from among the party's factions. Observers say this would hamper Ishiba given his weak base of support in parliament but stronger support among the party's rank and file.

Asked whether he would run under a restricted vote, Ishiba said he "will not comment on hypothetical problems at this time." The Abe rival has said he will clarify his stance after Tuesday's General Council meeting.

The former minister called Suga the "backbone" of the administration and someone he trusts, noting that they worked together to return the LDP to power in 2012.

On the same day, Kono told reporters that he plans to consult with others and see which type of vote the LDP chooses before making a decision on running.

A majority, 56%, said they want the next prime minister to serve at least four years, with 29% saying "as long as possible." Just 19% hope for a caretaker who would stay only until the end of Abe's unfinished term in September 2021. LDP leaders are elected for three-year terms.

Desired traits in the next prime minister include leadership, cited by 45% of respondents, as well as diplomatic skills and trustworthiness at 38% and 35%, respectively. Public popularity ranked last, chosen by just 9%.