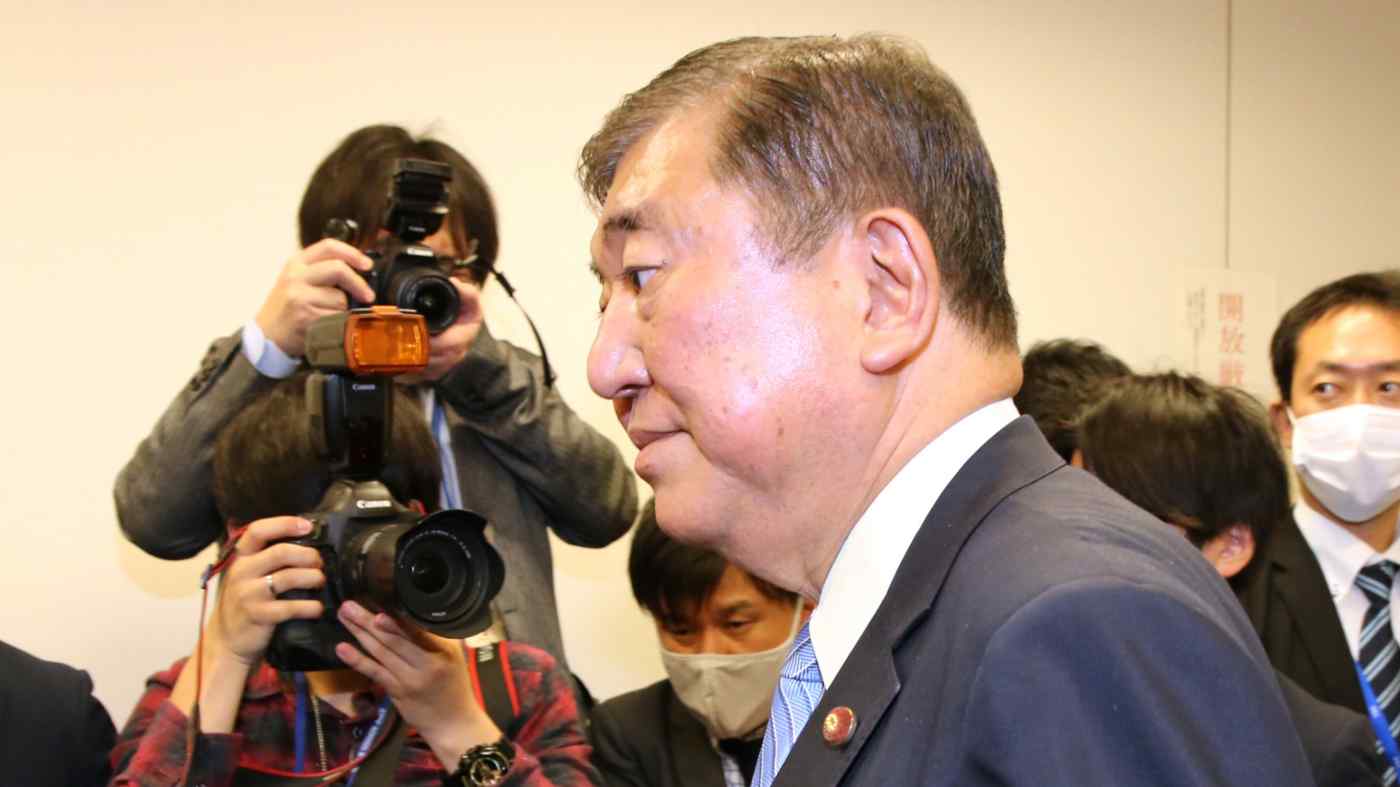 Some of Shigeru Ishiba's allies saw his decision as an act of self-sacrifice, though there is concern that it could destabilize the faction. (Photo by Uichiro Kasai)
YUTA SHIMAMOTO, Nikkei staff writerOctober 23, 2020 06:56 JST | Japan
CopyCopied

TOKYO -- Once a stone's throw away from Japan's premiership, former Defense Minister Shigeru Ishiba on Thursday announced an unceremonious exit from center stage.

Ishiba will step down as the leader of his namesake faction within the ruling Liberal Democratic Party, following a devastating loss in last month's vote to replace former Prime Minister Shinzo Abe as the party's leader.

Though he has stressed that he will remain involved in politics, the surprise move by one of the LDP's veteran statesmen is expected to significantly alter the power balance within the party.

"I failed to meet the expectations of so many people. That responsibility lies with me," Ishiba said in a meeting with his faction members that day. Though he usually delivers his speeches from memory, he kept his notes close by as he explained his decision.

"But you're the heart and soul of this faction," one member said, urging him to reconsider.

The political factions within the LDP play a key role in choosing its leader. Ostensibly study groups for lawmakers with similar legislative aspirations, the factions help members with fundraising and vote as a group in electing a party leader. They also lobby for key party posts for their members.

Ishiba told reporters after the gathering that he would not disband the faction, and would remain a member. "The Ishiba faction is something that the LDP needs, and we need to work even closer together," he said. He has recommended Ichiro Kamoshita, his deputy within the faction, as his successor, though other members have decided to postpone that decision for now.

Members of his faction saw his decision as an act of political self-sacrifice.

"He probably wanted to protect the faction by taking the blame himself," another lawmaker said.

Ishiba has been a fixture within the LDP for years, serving in positions like party secretary-general and defense minister. In 2012, when the LDP was in the opposition, he beat longtime rival Abe in the first round of votes in a leadership election. Though he ultimately lost in the runoffs, his strong showing, particularly among prefectural party members, led to the launch of his own 20-member faction in 2015.

But he has struggled to expand his clout, partly because he kept Abe's government at arms length. His faction currently counts 19 members, including former agricultural minister Yuji Yamamoto and former health minister Norihisa Tamura, making it the sixth-largest in the LDP.

Ishiba was trounced in the LDP's most recent leadership election in September, winning just 26 votes from Diet members and 42 votes from prefectural representatives, compared with then-Chief Cabinet Secretary Yoshihide Suga's 288 and 89. He also lost against former LDP policy research chief Fumio Kishida, who won a total of 89 votes.

"I don't think he'll be able to run again," one political insider said.

After his defeat, Ishiba met individually with faction members to discuss how they should move forward. Some urged him to recruit new members himself.

Whether he intends to run in the next LDP race is unclear. "If he's not, then there's no reason for this faction to exist," one member said.

Ishiba's decision to step down could undermine the group's unity. Already, two members are planning competing campaigns for the same parliamentary seat.

After the Thursday meeting with faction members, Ishiba spoke with LDP Secretary-General Toshiro Nikai to inform him of his resignation and to ask for Nikai's cooperation on coordinating parliamentary campaigns.

Ishiba's decision to step down took many in the ruling party by surprise.

"Honestly, I'm shocked," said Wataru Takeshita, a party heavyweight and the leader of his namesake faction. "The head of a faction doesn't step down so easily."

"I have no idea how Mr. Ishiba's decision will impact" the next leadership race, Kishida said.