TOKYO -- Prime Minister Shinzo Abe's abrupt resignation has thrust the ruling Liberal Democratic Party into a scramble to pick the next leader. With the longest-reigning Japanese leader having no heir apparent, the race is likely to be fought among some of his closest deputies, along with an archrival who has long vied for the post.

The LDP is expected to hold an election to choose its next leader by mid-September. The winner of that race will become Japan's prime minister, who will face the challenge of containing the coronavirus outbreak while nurturing the battered economy back to health.

Shigeru Ishiba, the prime minister's longtime rival who once served as defense minister, and Fumio Kishida, the former foreign minister, are expected to throw their hats in the ring. And Chief Cabinet Secretary Yoshihide Suga, Abe's loyal right-hand man, is gaining traction as a possible dark horse.

Abe has not groomed an heir apparent, and the outcome remains uncertain. The party is likely to opt for a simpler election format that places heavy weight on lawmaker votes, making the race susceptible to the wishes of influential factions.

"The biggest issue is who is going to succeed," said Takashi Mikuriya, a fellow at the University of Tokyo's Research Center for Advanced Science and Technology. "He has not made full efforts to groom next-generation leaders. And that is going to backfire." 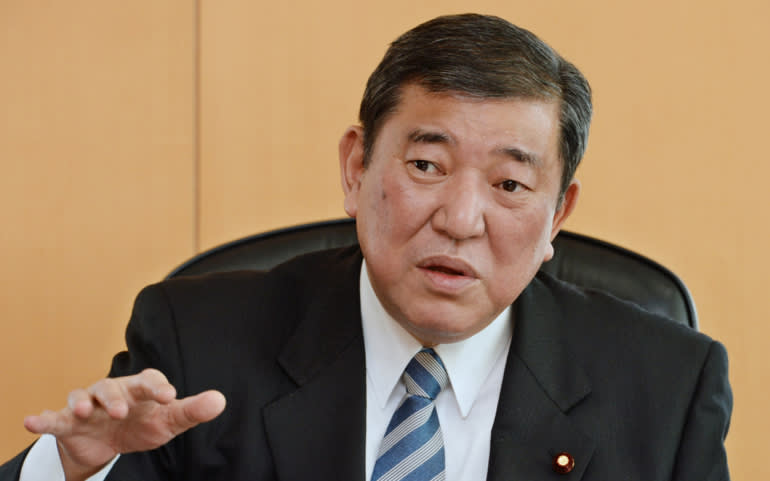 Patrick Cronin, an East Asia expert at the Hudson Institute, credits Abe, Suga and Deputy Prime Minister Taro Aso for steady leadership but sees Abe's departure as an indication that the "nucleus of septuagenarians is now giving away to a younger generation of Japanese political leaders."

"Transitions are exciting times, but they are also periods of heightened uncertainty and vulnerability," he added. "We should not be afraid of change but rather see it as an opportunity to make adjustments in order to deal with tomorrow's challenges."

Senior LDP officials held an emergency meeting Friday and entrusted party Secretary-General Toshihiro Nikai to decide on the timeline and the selection method. A final decision will be made on Tuesday.

Ishiba, signaling his intentions to enter the race, held a meeting of his party faction on Friday. Ishiba, who also served as LDP secretary-general, leads other party members as a potential successor in opinion surveys. He beat Abe for the first time as the preferred prime minister in a Nikkei opinion survey in July among LDP supporters.

Ishiba has run for LDP president three times to date. In 2012, he took the most votes among regional party officials and supporters. But Abe came from behind in the vote among LDP legislators. Ishiba lost a rematch against Abe in 2018. Ishiba's faction just has 19 members -- one person shy of the 20 people needed to nominate a candidate for LDP leader. That would put Ishiba at a considerable disadvantage in an election that puts more weight on the votes of lawmakers than those of regular party members.

"The biggest benefit of being a party member is the chance to elect the party leader," said Ishiba, arguing that all votes should carry the same weight. "To deny this opportunity would be akin to an act of disloyalty to party members,"

Kishida, who is the current chair of the LDP's powerful Policy Research Council, leads the fourth-ranked LDP faction. If he throws his hat in the ring, this would be his first leadership campaign.

Abe has previously mentioned Kishida as a possible successor, praising his effort as a foreign minister to realize then-U.S. President Barack Obama's visit to Hiroshima.

But it remains an open question if enough lawmakers will rally behind him.

A thoughtful but perhaps not charismatic lawmaker, Kishida sits near the bottom of opinion polls, which critics say does not give him much clout in messaging. Younger lawmakers, in particular, have misgivings about Kishida being the face of the party in the run-up to the next lower house election. Chief Cabinet Secretary Yoshihide Suga has long served as the anchor of the Abe cabinet. (Photo by Uichiro Kasai)

In the absence of a clear front-runner, Suga has emerged as a possible successor. He has served as the cornerstone of the cabinet since Abe began his second stint as prime minister in December 2012.

A shrewd political operative, Suga also commands extensive connections within the LDP and to the Komeito party, the junior coalition partner. Although Suga does not belong to a party faction, many legislators unaffiliated with factions are pushing Suga for the job.

Defense Minister Taro Kono, a member of the Aso faction, has expressed interest in the race. Aso at one point appeared to favor Kishida as Abe's replacement, but others in Aso's faction say such backing should go to Kono instead.

But both Kono and Motegi are considered long shots for the job.

Environment Minister Shinjiro Koizumi, who has placed high in opinion polls for potential successors, has remained mum about his intentions. 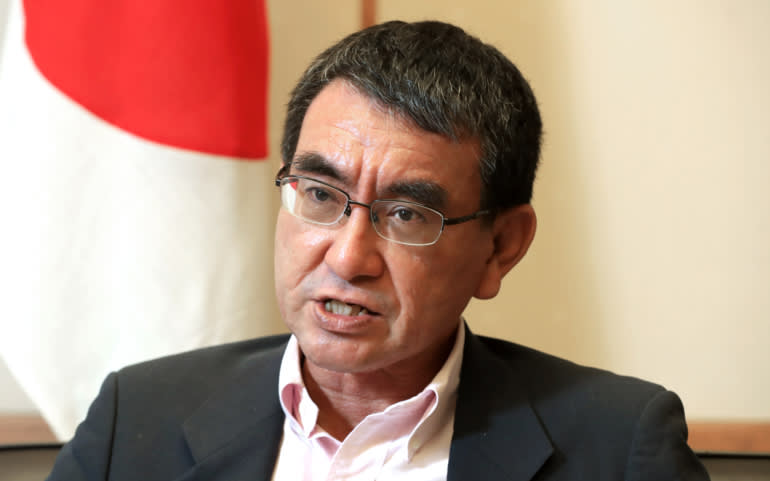 "The work of the prime minister is not something that can be done alone," said Koizumi. "Without the support of colleagues, I cannot get to the starting point."

The LDP president serves three-year terms, and the election for the seat is usually held when the tenure comes to a close. Party officials and supporters across the country, as well as national legislators, cast votes.

In the event that the party president steps down before the current term is over, the party could take a shortcut. In that case, legislators are allotted one vote each. But unlike a normal intraparty election, each prefecture can only submit three votes. Nikai hinted Friday that he could opt for this route.

The cabinet is expected to resign en masse after the new LDP leader is elected. Afterward, the election of the prime minister will be held during an extraordinary plenary session at both house of the Diet. Foreign Minister Toshimitsu Motegi speaks to reporters at the ministry in August. (Photo by Masaya Kato)

The newly elected prime minister will immediately start assembling a cabinet and launch the new government.

Because Abe was originally due to step down in September 2021, the first term of the new LDP leader will last until then.

The next prime minister will face the monumental task of managing the coronavirus pandemic and reviving the economy. And he will have to pick up where Abe left off.

"Although Abe was unable to amend the constitution during his watch, he has created the mood for change," said Mikuriya. "On the foreign policy front, he launched various initiatives but his resignation leaves them only halfway done," he added.