Who is Yoshihide Suga? TOKYO -- Yoshihide Suga's day begins by reading all major newspapers and then doing 100 situps. When he finishes, he goes out on a 40-minute morning walk. He is already in his work mode at this point, so he is clad in a business suit. He never misses the walk even on a rainy day.

At night, after a grueling workday, he returns to his room in the Diet members' dormitory and does another 100 situps.

The daily routine of Suga, Japan's longest continuously serving chief cabinet secretary, reflects a dedicated and determined character that can be seen in various aspects of his life and work.

The situps began when his doctor told him that his weight, which had reached 77 kg, might undermine his health. "I'm good at setting targets and taking up habits, so I decided to start with a goal of going down below 70 kg," he said. "After achieving it earlier than expected, I said, 68 kg next, and then 65 kg."

As head of the Cabinet Secretariat and the top government spokesman, Suga's no-nonsense schedule continues throughout the day.

In addition to breakfast and lunch meetings, he often has two dinner meetings a day.

And it continues through the weekend. "On Saturdays and Sundays, I hear opinions from various people to first study issues that I think I must address," he said.

Since assuming the post of chief cabinet secretary, Suga has stuck to his routine almost every day and never stayed overnight at his home in the Kanagawa Prefecture city of Yokohama, near Tokyo.

Suga tries to have firsthand knowledge of what is happening in the world. He always continues to look for the right things and ordinary people's sense, precisely because he is at the center of power. 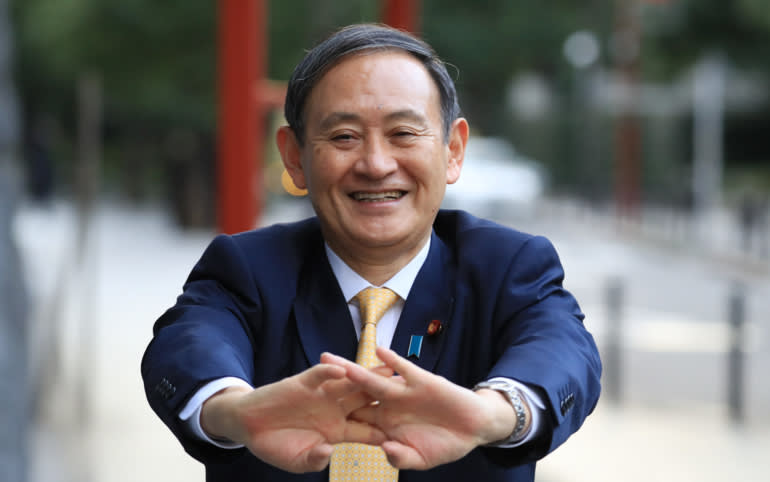 With a daily routine of 200 situps, Suga once lost 14 kg in a span of four months. (Photo by Mamoru Yago)

Called tsujidachi, street speeches by members of the Diet in front of train stations have now become commonplace. But they were started by Suga when he was still a political novice.

Suga would greet morning commuters and then hand out questionnaires listing policy agendas of the time. It was considered groundbreaking in an era when politicians would hold big, morale-boosting rallies inside buildings.

Looking back, Suga said: "I asked people to circle matters of interest on questionnaires. Some people from the then-Democratic Party who learned about it came to my office to borrow copies."

His devotion to work has its roots in his native Akita Prefecture. He was born to a strawberry-farming family. "My parents were hard workers. They returned home from fields around the time I got up. People in the countryside are all like that," he said.

In the winter, he lived in a boardinghouse near his high school due to the snow. But after the harsh season, spring would always come, melting the snow and exposing the bare roads.

"This feeling can be understood only by people who live in snowy regions in rural areas. My patience was fostered by the countryside before I realized it," Suga said.

After graduating from high school, he came to Tokyo, thinking that something would change.

He worked in a small factory, only to quit after two years. Suga said he thought that if the situation remained unchanged, his life would be "a painfully lonely one."

Suga then entered Hosei University. He worked part-time days and nights to pay for school expenses.

After four years of college life, he thought of returning to Akita but chose to try working at a private company.

It was during those days that he began formulating the idea of going into politics.

"I began to think that it was politics that was moving this world," he said.

With no personal connections to rely on, he went to Hosei University's career center.

"Can you introduce me to politicians who have graduated from this school?" he asked.

The center introduced Suga to the head of the alumni association secretariat.

That introduction worked, and the 26-year-old Suga landed a job as secretary to Hikosaburo Okonogi, a House of Representatives member elected from Yokohama. It was 1975.

"In retrospect, I think I did well," Suga said nostalgically of the time when he faced the first important turning point of his life. Few students wishing to join the political world think of enlisting their colleges for help getting a foot in the door. But Suga figured that since he was looking for work, visiting the career center would be just like any other student looking for an ordinary job.

As such, Suga had already developed a sense of what is "ordinary" or "right" when he took his first step into the political world.

For Suga, the next important turning point came when he ran for the Yokohama municipal assembly at the age of 38. He was born in Akita and had no network of relatives or friends to speak of in Yokohama.

Suga came under attack from rival candidates who claimed that he would simply pack up and return to Akita if he lost. Undaunted, he wrote upfront in his profile that he was born in Akita.

The gambit paid off. He won the election as he garnered support among many people who had also come to Yokohama from rural areas.

"At that time, I had the most difficult time as I lacked name recognition and ran in the election while having three children aged 6, 3 and 1," Suga said.

He served two four-year terms as a Yokohama Municipal Assembly member before being elected in 1996 to the House of Representatives, the Diet's more powerful lower house.

Suga's name became widely known in Tokyo's Nagatacho district -- Japan's political nerve center, where the Diet building and the prime minister's office are located -- during the 1998 leadership race of the Liberal Democratic Party.

Suga belonged to an LDP faction headed by future Prime Minister Keizo Obuchi. But instead of supporting Obuchi, Suga backed veteran Seiroku Kajiyama, also of the same faction. Suga and Kajiyama left the faction together after the latter lost.

It was a "rebellion" unthinkable for a new legislator. But Suga said: "It was strange that everyone worried about me so much, even as I just did the right thing."

The 1998 LDP leadership election came at a time when financial instability gripped the nation.

Kajiyama said that "there are too many big banks -- only two or three are enough" and advocated a "hard landing" policy. Suga completely agreed. "Supporting a person who I want to make prime minister is the right thing, isn't it?" he said.

Like his mentor Kajiyama, Suga ended up becoming chief cabinet secretary. He has held the job since December 2012. 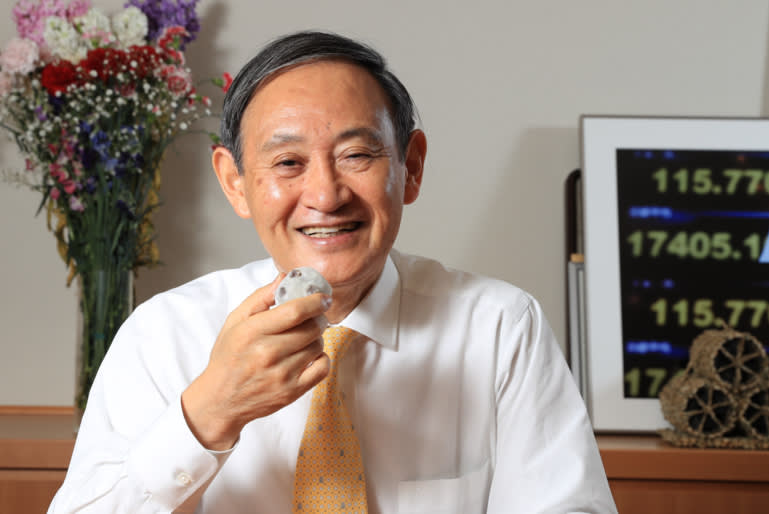 Suga does not drink alcohol but says he has had a sweet tooth since he was young. (Photo by Mamoru Yago)

Despite his strict regimen, Suga does have one soft spot: sweets.

"I can't drink alcohol. I have a sweet tooth instead," he said. He finds pancakes irresistible. He and his wife waited in line to enter Australia's Bills restaurant, which landed Japan in 2008, to eat ricotta hotcakes.

The situps-and-walking morning routine projects a self-disciplined persona that apparently does not hold for sugary treats.

"I might eat them maybe, well, on three or four days a week," he said. "I sometimes eat them and later say, 'Darn, I did it again!'"

He also has a plan for his post-cabinet-secretary days.

"In due course of time, I want to go to Cebu in the Philippines and attend a language school there for about three months so that I can speak a bit of English," he said.

"Then I want to make a leisurely travel around the world for one or two years. An intern at my office also went. It is apparently pretty cheap."