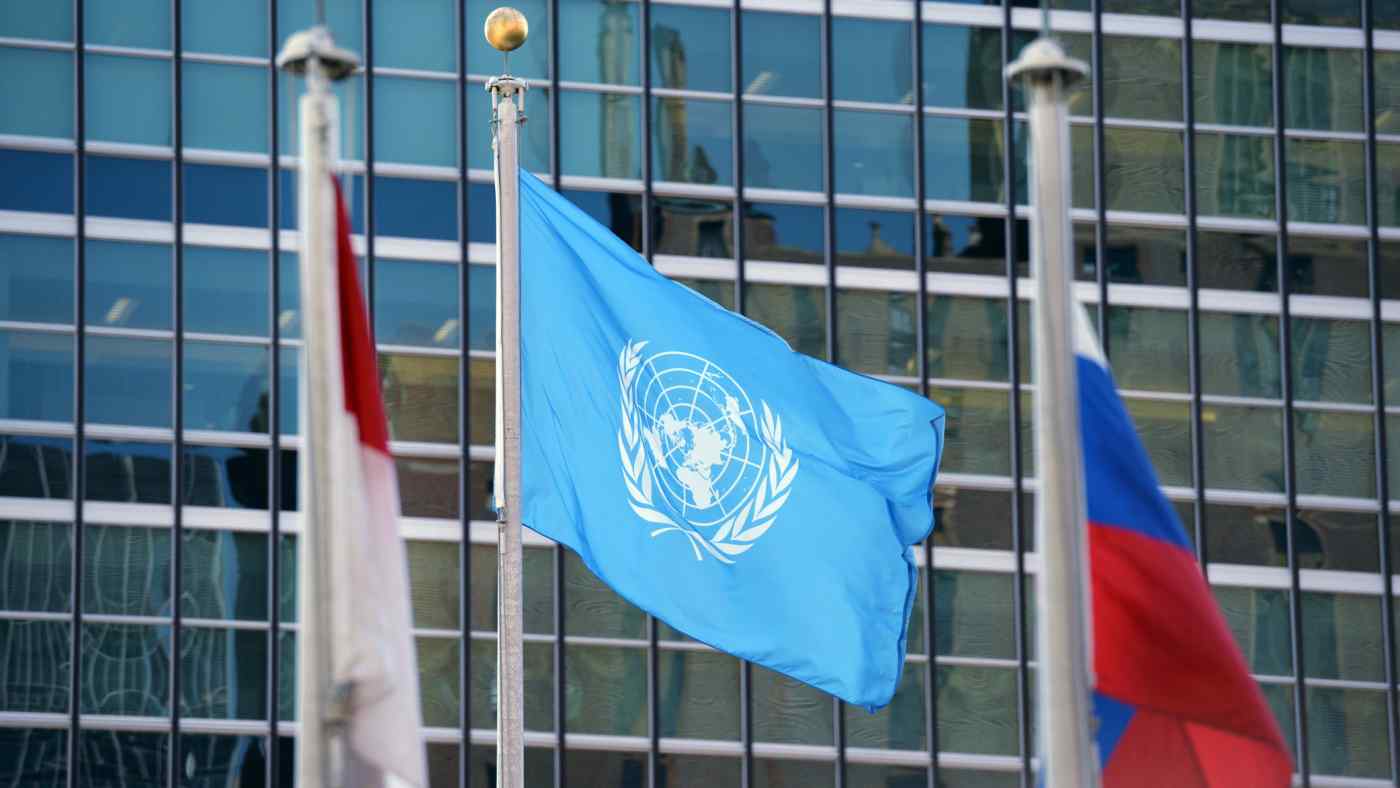 TOKYO -- The Japanese government and the ruling Liberal Democratic Party will centralize planning for executive personnel placements at the United Nations and other international organizations to counter China's growing influence.

The aim is to identify strategically important international posts in fields such as economics and security, and fill them with Japanese who have experience as cabinet ministers.

A group LDP lawmakers led by party heavyweight Akira Amari will begin deliberations Thursday on a proposal to bring the nomination process under the Cabinet Secretariat, which answers directly to the prime minister. Up to now, the Foreign Ministry and other government agencies have been responsible for nominating candidates.

International organizations influence rule-making for everything from trade, to telecommunications to maritime rules. Japan believes having senior personnel in these organizations will become more important to its economic security in the future.

There are nearly 100 international organizations with global scope, and many senior positions in these bodies have terms of around five years. Top posts at organizations such as specialized United Nations agencies are decided by votes by member states.

The task of drawing up a personnel strategy for international organizations will fall to the National Security Council's economic team, which was established in April. The personnel selection system is expected to include discussions between the economic team and government agencies, such as the Cabinet Bureau of Personnel Affairs and the Foreign Ministry.

It will also involve coordinating with other countries on the timing of elections at international organizations, as well as selecting and lobbying for candidates.

At present, there are no Japanese nationals serving as heads of U.N. specialized agencies. The group of LDP lawmakers argues that not only language ability, management skills and technical expertise, but also experience in the government beyond serving as a minister, are necessary to serve in top international posts.

There are many bureaucrats in Japan, but according to the Foreign Ministry there has never been a cabinet minister who served in a post at the U.N. or one of its specialized agencies. People with ministerial experience are respected in the international community, and foreign ministers have useful overseas connections.

Japan's new strategy will involve both putting forth candidates for senior international posts and coordinating with the U.S. and European countries that share common values, such as the rule of law. Many organizations customarily bar top officials from the same region from serving consecutively. Japan's strategy may entail handing off top posts to countries that cooperate with it when the term of a Japanese official has ended.

The selection of the next director-general of the World Trade Organization will be a litmus test. The position is currently held by Roberto Azevedo, a Brazilian, who suddenly announced that he will step down later this year. The search is on for his successor.

The WTO began accepting nominations on June 8. Observers believe the U.S. will support Tim Groser, a former trade minister of New Zealand, while China is expected to back Kenya's Amina Mohamed, who serves in that county's cabinet. Japan will coordinate with the U.S., working on the assumption that it will be in conflict with China.

The terms of the heads of several other organizations will end soon. The U.N.'s top executive and the head of the UNESCO will see their terms end next year. The top officials at the WHO and the International Labor Organization are set to step down in 2022.

China's ascent at the U.N. has been striking. Chinese nationals head of four of the U.N.'s 15 specialized agencies. Asked about the country's influence, a senior lawmaker in the LDP group said: "We can see that they plan to make their own national policies into international standards."

China has used its economic might to support countries in Africa and elsewhere, strengthening its own influence. In 2019, for example, China agreed to defer loan payments from the West African nation of Cameroon. In return, Cameroon withdrew its candidate to become secretary-general of the U.N. Food and Agriculture Organization and the Chinese candidate went on to win.

In some cases the international community has come to doubt the neutrality of organizations with Chinese executives at the helm. The U.N.'s civll aviation body has blocked Taiwan's participation in the organization's general assembly since 2016. Secretary-General Fang Liu has long been involved in the Chinese government's aviation policy.

The ITU, under Secretary-General Houlin Zhao, announced that it would strengthen cooperation with China's Belt and Road Initiative. As an engineer working in the Chinese government, he participated in setting telecommunications standards and drawing up national strategies.

The WHO has been criticized, principally by the U.S., for being overly solicitous of China regarding the country's response to the novel coronavirus. Tedros has been unable to dispel the view that he is giving special consideration to China, which has close economic ties to his home country, Ethiopia.