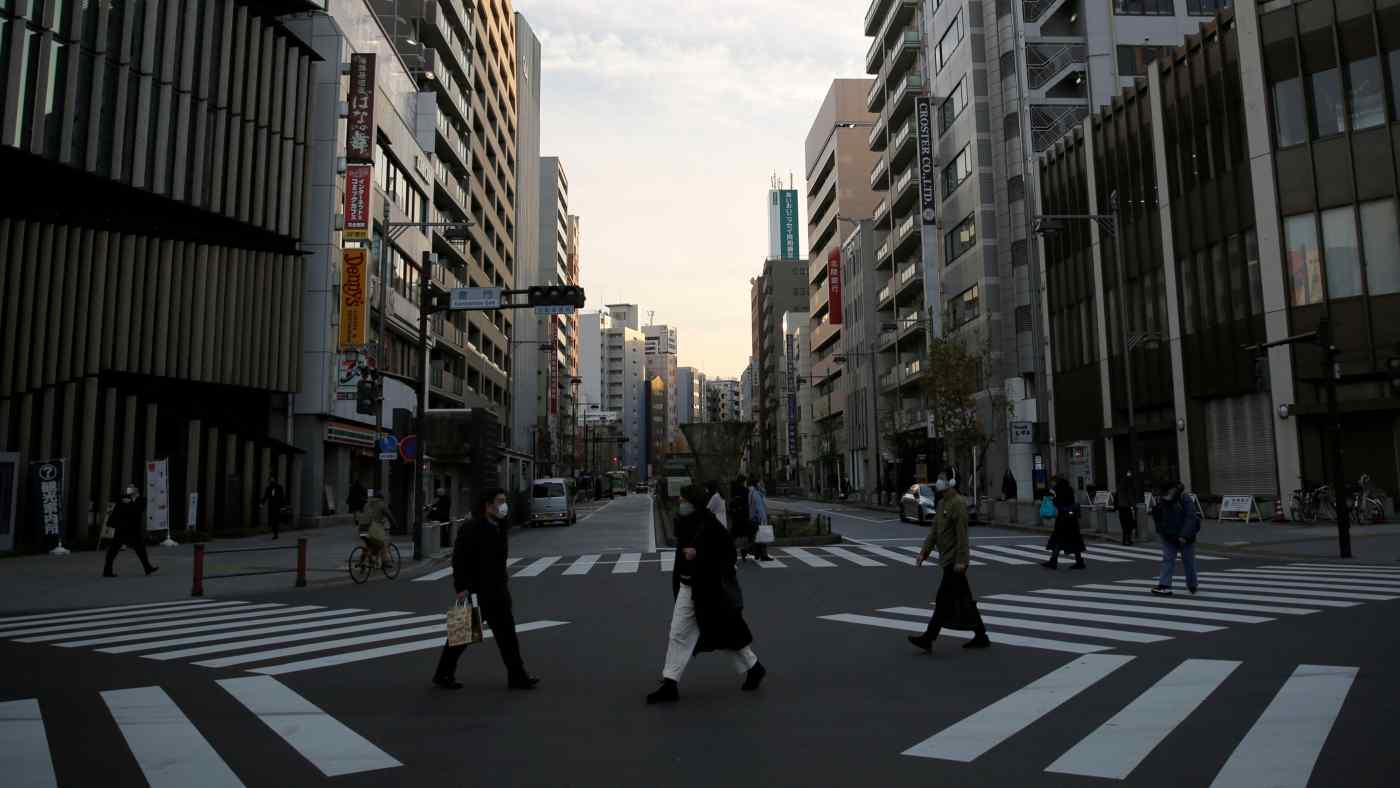 Japan's financial wellness is being questioned as the coronavirus takes its toll on the nation's economy.   © Reuters
December 21, 2020 11:33 JST | Japan
CopyCopied

Marking a record high for the ninth consecutive year and topping 100 trillion yen for the third year in a row, the budget for the year starting in April will far exceed fiscal 2020's initial budget of 102.66 trillion yen, raising concern over a further deterioration of the country's fiscal health, already the worst among major economies.

To finance the budget, new bond issuances will soar 11.04 trillion yen from the current year's initial plan to 43.60 trillion yen, the first year-on-year rise in 11 years on an initial basis.

Tax revenues, which were increasing in recent years due to strong corporate earnings and tax hikes, are estimated at 57.45 trillion yen, larger than the downwardly revised estimate of 55.13 trillion yen in fiscal 2020.

As a result, 40.9 percent of the budget will be funded by debt, compared with 31.7 percent in the current year. The ratio could be bigger if Prime Minister Yoshihide Suga opts for taking additional measures against the pandemic by supplementary budgets.

The draft of the initial general-account budget, which will be submitted to an ordinary parliamentary session to convene in January, includes 23.76 trillion yen in debt-servicing costs.

Among the policy spending, 5 trillion yen will be set aside for reserve funds for future response to the global health crisis. The funds can be spent without a breakdown of expenditures and further Diet approval.

Social security outlays will rise to a record 35.84 trillion yen, accounting for about a third of the whole budget, as a rapidly graying population has led to ballooning health care and pension costs.

The rise in social security spending was expected to be about 480 billion yen, but the government will reduce it to around 350 billion yen by measures such as lowering drug prices.

Japan's defense budget will total around 5.34 trillion yen, up 0.5 percent from a year earlier to hit a record high for the seventh straight year, as it steps ups efforts to beef up capabilities in new domains such as cyberspace and outer space.

Growing for the ninth successive year, the defense budget also included 33.5 billion yen for the development of Japan-made standoff missiles capable of attacking enemy vessels from outside their firing range, amid increasing China threats.

The amount of Japan's public debt was around 1,106 trillion yen as of March this year, more than double its annual gross domestic product. The figure is expected to grow to around 1,201 trillion yen next March and about 1,209 trillion yen a year later.

Meanwhile, the government has kept the goal of bringing the primary balance -- tax revenue minus expenses other than debt-servicing costs -- into the black by fiscal 2025. The nation is likely to post a primary deficit of 20.36 trillion yen in fiscal 2021, up 10.74 trillion yen from the previous year's initial plan.

The endorsement of the draft annual budget came as Japan has seen record numbers of coronavirus cases, seriously ill patients and daily deaths since mid-November, even as there were signs the world's third-largest economy was slowly emerging from the initial impact of the pandemic.

Under the administration of Shinzo Abe, who stepped down in September due to a chronic illness, the current fiscal year's spending reached an unprecedented 160.26 trillion yen, pushed up by two extra budgets totaling 57.60 trillion yen to fund programs designed to stimulate the virus-battered economy.

The total scale of the fiscal 2020 budget is set to further expand to 175.69 trillion yen, as the Cabinet of Suga, who has followed his predecessor Abe's policy of placing priority on economic growth to achieve fiscal consolidation, last week approved the third extra budget, which will also be submitted to the upcoming regular Diet session.