Authorities not sure what to protect: bluefin or an industry The Tsukiji fish market in Tokyo received 40% more shipments of bluefin tuna caught by Japanese fleets in 2016 than it did in 2011, before fishing restrictions began.
February 13, 2017 13:00 JST | Japan
CopyCopied

In 2014, the Western & Central Pacific Fisheries Commission, which manages tuna stocks in the western and central areas of the Pacific Ocean, including waters off Japan, established a rule for conserving marine resources. The commission agreed to more than halve catches of juvenile bluefin tuna weighing less than 30kg from the annual average levels from 2002 through 2004 and keep adult fish catches below those levels.

Based on this rule, Japan obliges bluefin fishing crews operating along the coast to obtain a license and places a ceiling on catches by region and fishing method.

However, unauthorized fishing and undeclared catches are being uncovered, which could shake the country's commitment to the international agreement.

In November 2016, suspected violations surfaced in Nagasaki and Mie prefectures. 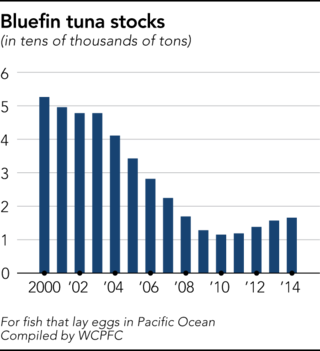 According to an interim report on a survey conducted by the agency in December, about 12 tons of bluefin could have been harvested without permission in Tsushima, Nagasaki Prefecture. Additionally, about 30 tons of the catch went unreported there.

Acknowledging the severity of the matter, the agency conducted an additional survey and found more violations. The interim report, released on Feb. 3, says there are new reports of violations in seven other prefectures, including suspected unauthorized fishing of bluefin.

There are perhaps myriad reasons behind the violations, including a poor squid season.

Last summer, when squid catches were poor, swarms of juvenile bluefin were frequently spotted in waters around Tsushima. So some boats looking to profit off squid simply switched to the young bluefin despite not having a license.

Also, bluefin often get caught in nets meant for other types of fish. Fixed nets are usually used to catch salmon and yellowtail. However, fishermen cannot choose what fish get caught in their nets.

The only way to avoid a bycatch of bluefin is to stop using fixed nets. But this would "deal a major blow to local economies," said Akira Saito, the agency's senior official.

According to a representative from an association of fishermen that uses fixed nets, its members strive as much as possible to prevent bluefin bycatches. The measures they have taken include extending fishing's off-season -- those months when stocks of the species of fish that fleets intend to catch are low.

Still, large numbers of bluefin get hauled up with other species.

To prevent fishermen's conservation efforts from ending in vain, the agency will make bluefin subject to a resource management system, perhaps in fiscal 2017. In other words, it will give fleets more time to make adjustments but take stricter punitive measures against violators. Currently, this system is in place for seven species, including Japanese common squid and saury.

Japan is coming under increasing international criticism. More and more, the rest of the world sees the country as prioritizing the fishing industry over resource protection. Whether Japan can change the situation remains to be seen.