Japan election: How the night unfolded TOKYO -- Japan voted Sunday in a general election that proved to be a tough test for the ruling Liberal Democratic Party and the fledgling government of Prime Minister Fumio Kishida.

The LDP went into the election facing tight races in about 40% of single-seat districts, according to Nikkei's polling, and as the night went on it became clear it would lose some of the 276 seats it held before the vote. Nevertheless, despite some high-profile losses, in the early hours of Monday the party cleared the 233-seat threshold needed for a solo majority.

For a primer on how Japan's electoral system works, read our five things to know. And see here for all our election coverage. 9:30 a.m. Japan’s blue-chip Nikkei Stock Average jumped over 700 points at one point, or 2.4%, on Monday morning as investors welcomed the election results. With the LDP securing a sole majority in the lower house, uncertainty over the country’s politics eased, prompting risk-taking in the equity market.

2:15 a.m. The Constitutional Democratic Party is poised to fall short of the 110 seats it held before the election, as its partnership with the Japanese Communist Party sputters. Meanwhile, Nippon Ishin no Kai will likely surpass Komeito to become the third-largest party. 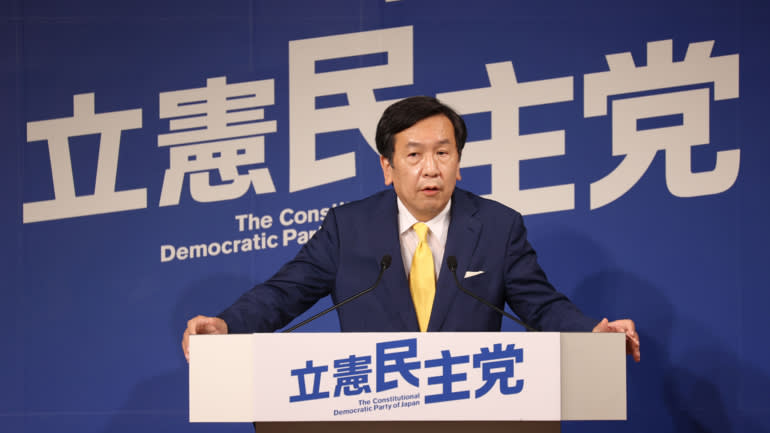 Yukio Edano, head of the Constitutional Democratic Party, speaks to reporters in Tokyo on Oct. 31. (Photo by Koji Uema)

1:37 a.m. LDP Secretary-General Akira Amari, who lost in his district, has conveyed his intention to step down from the party's No. 2 post to Prime Minister Fumio Kishida.

12:38 a.m. Despite dropping seats, the LDP has secured a solo majority in the lower house by clearing the threshold of 233, Nikkei now reports. This could allow the LDP-Komeito coalition to retain an absolute stable majority of 261 seats, which would let the ruling camp chair and maintain a majority of seats on all permanent lower house committees. 12:25 a.m. LDP Secretary-General Akira Amari is expected to be defeated in his district -- a big blow to his party. The recently appointed party No. 2 has an extensive background in economic policy, serving as industry minister during Shinzo Abe’s first stint as premier. Amari also led Japan’s negotiations on the Trans-Pacific Partnership free trade deal. In an interview with Nikkei earlier this month, he had vowed, “As secretary-general, I'll add however many seats I can above the minimum necessary to maintain power to ensure greater stability.”

Earlier tonight, apparently acknowledging his fading chances, Amari had said that if he loses, he would leave the decision over his role in the LDP up to Kishida.

11:45 p.m. Komeito, the junior partner of the LDP, looks likely to hold serve. Kyodo News reports that all nine of its candidates in single-seat districts are likely to win.

11:15 p.m. The Liberal Democratic Party is fighting neck-and-neck races with its biggest rival, the Constitutional Democratic Party. CDP chief Yukio Edano tells a radio show, “It's a very close race in quite a few constituencies,” adding, “We'll have to wait and see what the outcome is.”

The CDP looks to have suffered a significant loss, however: Ichiro Ozawa will not secure a seat, according to Nikkei projections. He played a key role in the establishment of the Democratic Party of Japan -- the CDP's predecessor -- which rose to power in 2009. The 79-year-old holds the record for most wins in the lower house among currently serving politicians.

11:05 p.m. Japanese Communist Party Chairman Kazuo Shii tells reporters that although the election has not produced a change of government, "We hope to accomplish this not in one try but through the next and third [attempts]." He stresses that opposition parties should maintain a unified front, saying, "We cannot have politics by the LDP-Komeito coalition continue forever."

10:55 p.m. Over on the opposition side, the Constitutional Democratic Party is set to gain seats from the 110 it held before the election and will keep its position as the biggest opposition group. The party is the successor to the Democratic Party of Japan, which was in power from 2009 to 2012. Many former DPJ cabinet ministers are in the CDP, including leader Yukio Edano.

10:35 p.m. With the ruling coalition set to retain its majority, Prime Minister Kishida says on TV, "I think it means that we have received a very valuable vote of confidence."

The LDP, however, is likely to win fewer than the 276 seats it held before the election -- a reality Kishida acknowledges. He says he plans to think about how to run the government after the vote.

With veteran LDP politicians facing pressure in their single-seat districts, the prime minister says, "I believe it is the reflection of the LDP's past four years."

Regardless of the final results, Kishida says he intends to go to the United Nations' COP26 climate summit in Scotland. "I want to attend it as it is the place to discuss problems of the entire human race," he says.

He adds, "I want to visit the U.S. as early as possible and want to make a summit [with President Joe Biden] happen."

10:30 p.m. Ex-vaccine minister Taro Kono is close to securing his seat, according to reports. The LDP candidate had competed against Kishida in the party's presidential race last month.

10:00 p.m. One of the big stories of the night might turn out to be Nippon Ishin no Kai (Japan Innovation Party). According to Kyodo's exit poll, the conservative opposition group looks poised to more than double its seats in the lower house. The party, which had 11 seats before the election could even overtake the LDP's junior partner Komeito, which had 29, and become the third-largest party after the LDP and the Constitutional Democratic Party. 9:55 p.m. As of 9 p.m., Kyodo News estimates voter turnout at 55.79%, up 2 percentage points from the 2017 lower house election. Again, the prevailing wisdom is that higher turnout benefits the opposition.

9:45 p.m. As numbers continue to trickle in, Prime Minister Kishida says he will "firmly accept the results of the election and move forward with [the country's] politics."

8:55 p.m. In brighter news for the LDP, Kishida has quickly secured his reelection, as have his two immediate predecessors, Yoshihide Suga and Shinzo Abe.

But in a setback, Takiichiro Hatsumura, an LDP newbie and ex-secretary for Abe, is set to lose in his single-seat constituency despite public campaign backing from Abe and Suga. Former Environment Minister Shinjiro Koizumi of the LDP reacts to numbers that put him on track to win in Kanagawa Prefecture. (Photo by Karina Nooka)

8:25 p.m. Another LDP heavyweight appears to be feeling the heat. Akira Amari, the party's new secretary-general, tells local media that if he loses tonight, he will leave it up to Prime Minister Kishida to make a decision regarding his post.

8:00 p.m. Here we go. The polls are closed and Nikkei projects the LDP-led ruling coalition will remain in control of the 465-seat lower house. What is less clear is whether the LDP will retain a majority on its own. If it doesn't, Kishida would find himself in a weakened position.

6:40 p.m. The Ministry of Internal Affairs and Communications announced that early voting turnout totaled around 20.5 million, or 19.49% of registered voters. Compared to the lower house election in 2017, the number of early ballots cast dropped by about 800,000. All eyes are on turnout, as greater voter participation tends to favor the opposition.

6:15 p.m. While we wait, let's look at what separates Kishida's LDP from the opposition, led by the Constitutional Democratic Party alongside the smaller Japanese Communist Party and two others. As this story explains, all the main parties promised generous spending programs and tax cuts in one form or another. "Trickle-down doesn't happen naturally," Kishida said during a debate.

On COVID-19, the LDP promised to prepare booster shots, speed up treatment approvals, and spend more on drug R&D. The CDP vowed to make testing free and introduce even tougher border restrictions.

The opposition played up social issues. The CDP promised to let married couples have different surnames, and pledged a bill guaranteeing equal rights for LGBT individuals. The JCP also put gender at the center of its platform, vowing to eliminate wage gaps between men and women.

Ultimately, though, this election looks like a referendum on the LDP government's handling of the pandemic, and the years it spent trying to jolt the nation out of deflation with "Abenomics." 5:30 p.m. Voters have until 8 p.m. to cast their ballots. Once the polling stations close, initial exit polls will provide a picture of how the night will play out. Most results are expected to be confirmed by the early hours of Monday.

If the LDP fails to retain its single-party majority, it could significantly weaken the Kishida government, formed on Oct. 4. Japan could see a repeat of the state of affairs before Shinzo Abe became prime minister in 2012, when the country went through a series of short-lived governments.