TOKYO -- Emperor Akihito largely avoided even indirectly commenting on his wish to abdicate during the traditional news conference at the Imperial Palace ahead of his 83rd birthday on Friday, focusing instead on time spent with disaster victims and honoring the war dead.

In an August address that sent shock waves through the country, Akihito discussed his personal views on the emperor's role and duties as symbol of the state, a matter that he said he "spent my days searching for and contemplating." He hinted heavily at a desire to step down, citing concern that declining physical fitness may make it difficult to fully carry out his duties.

Strong public support for the idea led the government to set up an expert panel to consider whether and how to allow the emperor to abdicate, which the constitution does not allow for. But some experts brought in for hearings expressed concern that Akihito's address itself may have run afoul of the charter just by raising the question. The constitution states that the emperor "shall not have powers related to government."

Akihito's decision to refrain from detailed comment on the topic in his birthday conference was likely reached in light of such views. "In August, in consultation with the Cabinet Office, I delivered a message expressing what has been on my mind over the last few years, reflecting on my years as the emperor and contemplating on my role and my duties as the emperor in the days to come," he said, without going into further detail.

"He may have intended to give the impression that he didn't just act on his own, but got the cabinet's blessing," said Hideya Kawanishi, an associate professor at Kobe College.

"The government view is that it's the cabinet's responsibility to take care that the emperor's public actions are in accordance with the constitution," a senior Imperial Household Agency official said. "'Consultation with the Cabinet Office' is a legitimate explanation."

This was the first time Akihito discussed his feelings about the matter in public since the August address. "I am profoundly grateful that many people have lent an ear to my words and are giving sincere thought to the matter in their respective positions," he said.

Akihito spoke clearly about his thoughts on the previous year during the roughly 17-minute news conference, hewing closely to his prepared remarks. He took the time to talk in-depth about honoring those killed in World War II and visiting disaster-stricken areas. "He kept to his style of mentioning the war and supporting disaster victims this year as well," said assistant professor Nozomu Tominaga at the Kyoto University Archives.

Discussing this year's visit to the Philippines, where he paid respects to the war dead, the emperor stressed that "the friendly relations that our two countries enjoy today have been built over the course of many years and on the sacrifices of numerous Filipino and Japanese people who lost their lives in World War II." 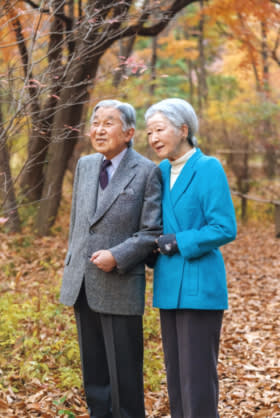 He singled out the Summer Olympics and Paralympics in Rio de Janeiro as a bright spot. "I was able to enjoy seeing Japanese athletes competing on television every morning," he said. He expressed pleasure at the attention paid to the Paralympics, which he and his wife, Empress Michiko, have supported for many years.

Akihito also mentioned Yoshinori Osumi of the Tokyo Institute of Technology, who was awarded the Nobel Prize in medicine this month for his work on autophagy, the process by which old cells are recycled. "I hope that Dr. Osumi, who just spent a busy week in wintry Sweden, will now be able to take some rest and then return to the quiet life as a researcher that he desires," he said.

On a sadder note, farewells were said for people with whom the emperor had enjoyed close, long-lasting relationships. He mentioned King Bhumibol Adulyadej of Thailand, who died in October, fondly recalling "the many occasions over the years on which we deepened our friendship."

Akihito also lamented the passing of his uncle Prince Mikasa, who died that same month at the age of 100. "The prince was one of the Imperial family members who had experienced World War II firsthand, and it meant much to me to be able to hear him talk of his experience," he said.

The emperor returned to the topic of the hardships endured during the war, which he also addressed last year, the 70th anniversary of the war's end. He recalled speaking with repatriated settlers of Manchuria during a private visit with Michiko to a memorial museum in Nagano Prefecture. Many settlers in the Japanese-colonized area were captured after the war.

The meeting allowed the emperor and empress to "deepen our understanding of the harsh experience of those who were involved in settling Manchuria and Inner Mongolia," he said.

The emperor carried out his duties over the past year with vigor, logging visits to 11 prefectures and signing off on more than 1,000 documents from the cabinet.

Akihito and Michiko attended the National Convention for the Development of an Abundantly Productive Sea in Yamagata Prefecture in September. They traveled by imperial train, spending nearly an hour and a half standing and waving to the public from the window.

The emperor traveled in March to Fukushima and Miyagi prefectures, which are still recovering from the March 2011 earthquake and tsunami, and spoke with victims who remain unable to return to their homes. He also visited in September an area of Iwate Prefecture hit hard by the disaster.

"Many people still live under difficult conditions, and I hope those people can return to their normal lives as soon as possible," he said in his birthday remarks. "I feel it is important that the hearts and thoughts of everyone be with the afflicted and that everyone continue to work hand in hand towards that end."

A May visit to Kumamoto Prefecture, which suffered severe damage from temblors the previous month, was limited to a day trip to minimize the burden on the locals.

"His Majesty still diligently attends to each of his duties, reading documents into the night and thinking on weekends about what to say at events," said an Imperial Household Agency official.

Akihito indicated in August that he would prefer not to reduce his workload. He is scheduled to make a state visit to Vietnam next year.