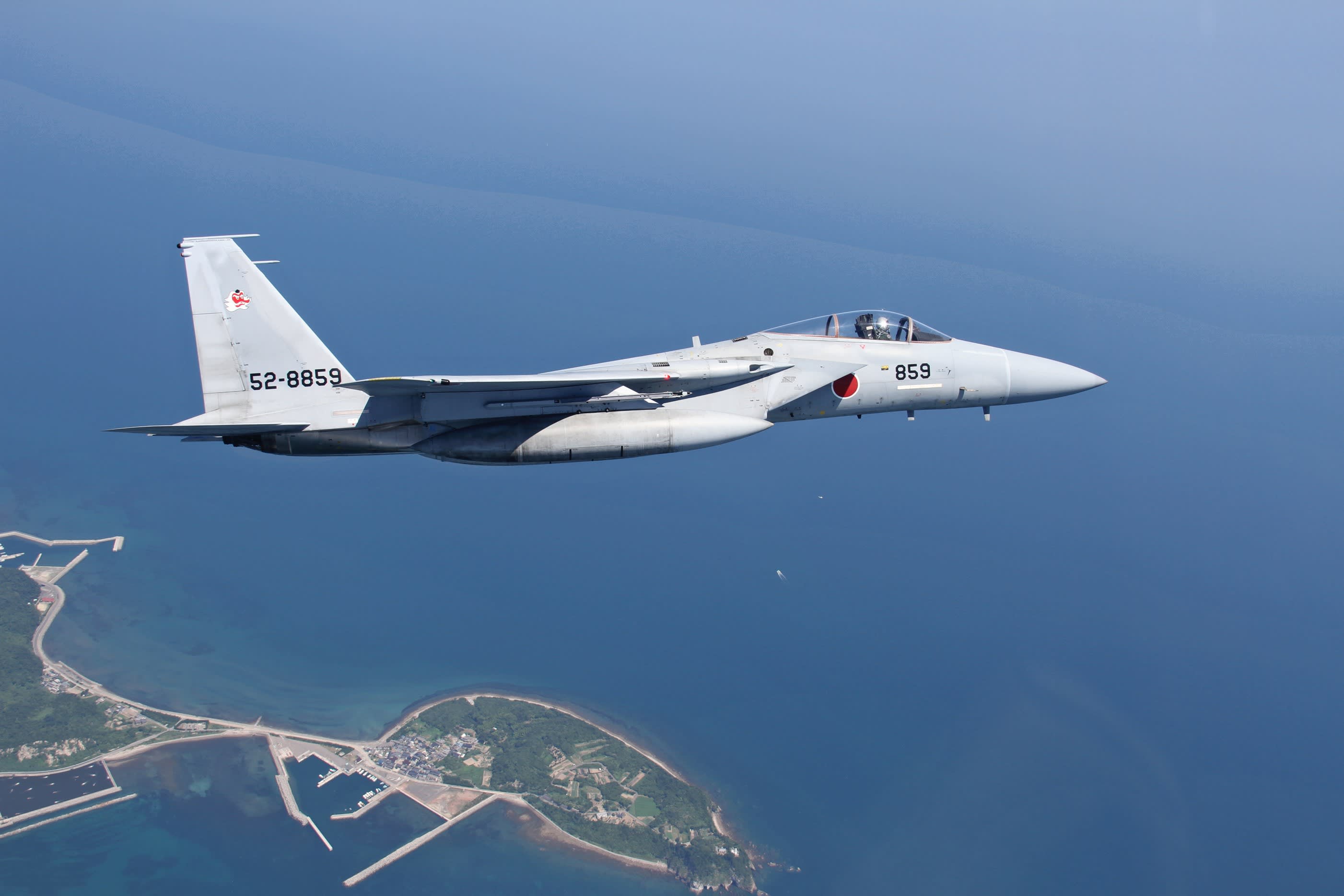 TOKYO -- Tensions are growing over Japanese airspace, with the number of scrambles by Japan Air Self-Defense Force fighters to intercept intruders rising to a 24-year high in fiscal 2013. 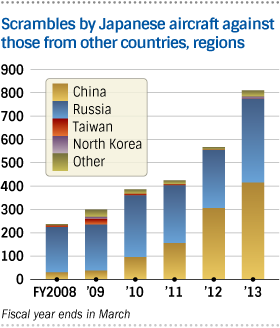 JASDF fighters were scrambled 810 times, or 2.2 times per day, in the year ended in March, an increase of 243 from the previous year, according to data released by the Defense Ministry in April.  That was highest number of scrambles since fiscal 1990, at the end of the Cold War.

Of the total takeoffs, 51 percent were to monitor Chinese planes, while 44 percent were to keep an eye on Russian aircraft. Intrusions by Chinese aircraft into Japan's airspace rose sharply to 415 in fiscal 2013, up 35% on the year and the largest number since the ministry began releasing country-by-country data in fiscal 2001. In fiscal 2008, there were just 31 scrambles against Chinese planes; since then, the number has risen 13-fold.

Intrusions by Chinese aircraft mainly occurred over the East China Sea, particularly near the Senkaku Islands, which Japan controls but China claims as its own. In July of last year, however, a Chinese plane was spotted for the first time flying between the main island of Okinawa and Miyako-jima Island to the Pacific Ocean. Chinese aircraft flew between the East China Sea and the Pacific on 10 occasions in fiscal 2013, according to the Defense Ministry's Joint Staff office.

A2AD is short for Anti-Access/Area-Denial, a term used by the U.S. military to describe a Chinese strategy designed to prevent U.S. and other forces from approaching China in an emergency using advanced missiles and fighter jets, as well as cyberattacks and strikes in outer space.

China is expanding its military activity, setting up an inner defense line between the main island of Okinawa and the South China Sea, and an outer line that runs between Tokyo and Guam. The bear is back

The number of scrambles by JASDF fighters to intercept Russian aircraft has also climbed sharply in recent years. Last fiscal year, there were 359, the most since fiscal 2001. Intrusions by Russian aircraft were especially noticeable in March, when tensions between Russia and the West intensified over Ukraine. Beginning on April 13, JASDF fighters were scrambled against Russian planes for seven days straight.

Moscow is attempting to get a closer look at joint military drills between the U.S. and South Korea and the situation on the Korean Peninsula in the wake of North Korea's missile launch in March, according to Japanese Defense Ministry officials. A senior Self-Defense Forces official said Russia also flies long-range bombers along the Japanese archipelago to collect signals intelligence from the Self-Defense Forces and U.S. armed forces.

"Russian bombers are frequently flying (near Japan) in recent days, a situation we didn't experience even during the Cold War between the U.S. and the Soviet Union," Japanese Defense Minister Itsunori Onodera told a group of nine lawmakers from the U.S. Congress who visited his office April 21.

Many Japanese experts are worried about how the tensions in Ukraine will affect Japan's security. "If the confrontation between the U.S. and Russia deepens, U.S. interest in the Senkaku Islands will weaken," frets a senior SDF official.  "China may see it as a golden opportunity to intensify its activities around the Senkakus."

The JASDF set up a new surveillance unit at its base in Naha, Okinawa Prefecture on April 20. The unit will operate  E-2C early-warning aircraft equipped with advanced radar systems. To further strengthen its early-warning and surveillance capabilities in the waters and airspace in and around the southwest of country, the Japanese Ground Self-Defense Force began April 19 building facilities on Yonaguni, where a coastal surveillance unit will be deployed. Yonaguni is Japan's westernmost inhabited island, some 500km southwest of Naha,

Japan's geostrategic headaches are legion at the moment. At a press conference on April 11, Harukazu Saito, the JASDF chief of staff, said his force was in urgent need of pilots because of the increasing number of scrambles. "It will be difficult to address (the problem) unless we come up with creative solutions, such as thinking about how to maintain the quality of training programs and educate the necessary personnel in an efficient way," he said.