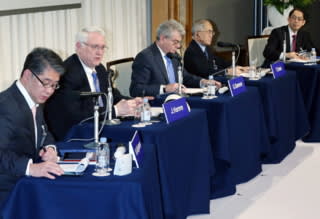 International experts on Monday take part in a Nikkei symposium on the nuclear industry and security in Tokyo.

"Without a strong commercial nuclear posture, Japan's former ability to influence nonproliferation will be diminished," said Robert Willard, president of the U.S. Institute of Nuclear Power Operations and a former head of the U.S. Navy's Pacific Command. "It's vital for Japan to restart its nuclear industry."

In a panel discussion following Willard's remarks, John Hamre, president of the Center for Strategic and International Studies in Washington, D.C., said the world needs Japan "to remain as one of the strongest forces for nonproliferation." Hamre stressed Japan must grow stronger economically and diplomatically, adding, "The centerpiece of nuclear security is commercial nuclear energy."

Japan's political and economic ties with Iran could allow it to offer crucial support for the nuclear negotiations between Tehran and the so-called P5 plus one countries, said Gary Samore, executive director for research at the Belfer Center for Science and International Affairs at Harvard University's John F. Kennedy School of Government. The five permanent members of the United Nations Security Council and Germany recently reached an interim deal to freeze progress in Iran's nuclear program.

Richard Meserve, president of the Carnegie Institution for Science, said: "Nuclear power is important to Japan and should be restored. In order for that to occur, steps must be taken to assure the safety of the plants, and to provide confidence that adequate protection of the public and the environment is being achieved."