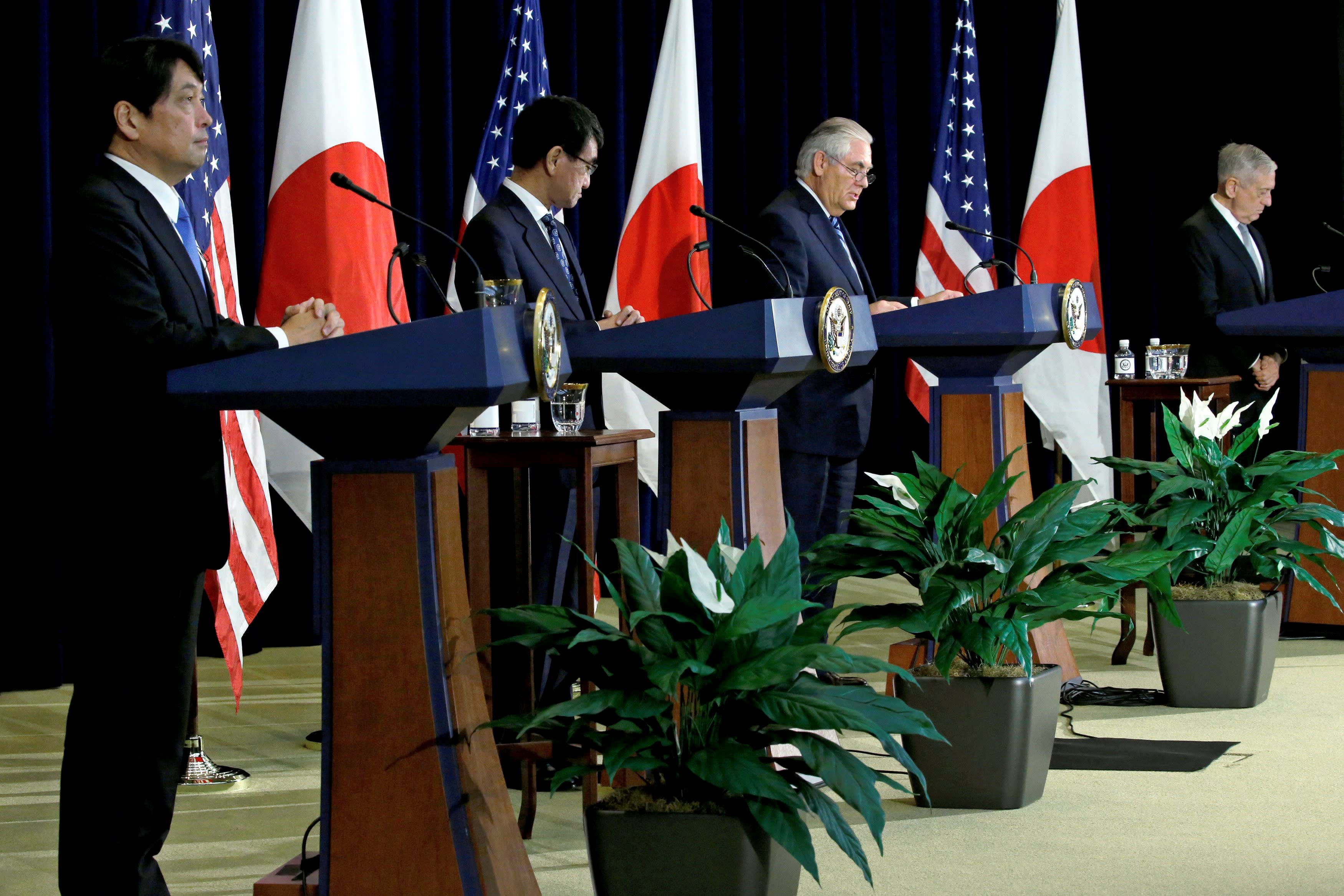 WASHINGTON -- Tokyo agreed to bolster its defense capabilities and strengthen its role in the country's security alliance with the U.S. at a bilateral meeting Thursday, while Washington in turn reiterated that its nuclear deterrence extends to Japan.

The four officials issued a joint statement to reporters afterward, and will head into one-on-one sessions with their counterparts. Japan to step up defense spending amid Pyongyang threat

With strike at the ready, Pyongyang gives US next move

The discussion mostly centered on North Korea and the Japan-U.S. alliance. Kono, Onodera, Tillerson and Mattis "condemned in the strongest terms North Korea's recurring provocations," according to the statement, while agreeing to continue pressuring Pyongyang in cooperation with other countries. The ministers also said they will "strongly encourage China to take decisive measures to urge North Korea to change its course of action."

Regarding their bilateral alliance, the U.S. reaffirmed its "commitment to the security of Japan through the full range of capabilities, including U.S. nuclear forces." Prime Minister Shinzo Abe and Trump also touched on the American nuclear umbrella over Japan in a joint statement from their summit in February -- the first such mention in an official document released by leaders of the two nations in about four decades, according to the Japanese Foreign Ministry.

Extended American deterrence covers allies, like Japan and South Korea. Thursday's statement was designed to reiterate that Washington is prepared to use its nuclear arsenal to counter the North Korean threat if necessary.

"Japan intends to expand its role in the Alliance and augment its defense capabilities," the statement from the four ministers said. Tokyo looks to acquire new equipment over the five years starting in fiscal 2019, as well as to deploy the land-based Aegis Ashore missile defense system. Japan and the U.S. also will explore areas for further peacetime cooperation such as patrols and surveillance, research and development, and the sharing of facilities.

The Japanese Self-Defense Forces escorted a U.S. military ship for the first time in May, under security legislation enacted in 2015 that expanded the SDF's functions. The ministers Thursday cited "important steps within the Alliance."

In addition to missile defenses, the two countries also will look to greater cooperation in space and cybersecurity.

"The United States remains committed to deploying its most advanced capabilities to Japan," they said.

The ministers also agreed to maintain at current levels the Japanese financial contribution to the American military presence there, calling the funding "a symbol of Japan's enduring support." During the presidential campaign, Trump had called on Japan to shoulder more of the costs. Thursday's statement was intended to dispel concerns in Tokyo regarding the bilateral alliance.

Kono, Onodera, Tillerson and Mattis expressed "serious concern" over Beijing's actions in the South China Sea, as well as "their opposition to unilateral coercive actions by claimants, including the reclamation and militarization of disputed features, that alter the status quo." The ministers also reaffirmed that Article 5 of the U.S.-Japan Security Treaty applies to the Japan-administered Senkaku Islands in the East China Sea, which China also claims and calls the Diaoyu.