Lawmakers in Japan's lower house cheer the dissolution of the chamber on Sept. 28. Opposition parties boycotted the session. (Photo by Uichiro Kasai)
Politics

Prime Minister seeking to strengthen his hand, but gambit could backfire

TOKYO -- Japan's lower house of parliament has been dissolved after Prime Minister Shinzo Abe decided to call a snap general election, in a gambit that some now believe may backfire.

The dissolution was announced on Thursday as an extraordinary parliamentary session was convened. The general election, expected  to be held on Oct. 22, will set off a three-week scramble by the 475 members of the lower house to fight for reelection. The number of seats has been cut to 465 -- the smallest in the postwar period -- to reduce voting disparities between urban and rural districts.

Abe justified the move, which comes with more than a year left of his four-year term, by claiming a fresh mandate was required to deal with major challenges facing the country, such as escalating tensions with North Korea and a demographic crisis. But some opinion polls show that most voters do not understand the reasons for calling an election now. At a cabinet meeting Thursday morning, Abe stated that the election would provide an opportunity for a thorough debate on policy with the opposition. "Our job is to explain our policies and produce results," Abe said.

Abe's Liberal Democratic Party and its coalition partner Komeito are aiming for a simple majority of at least 233 seats in the lower house. But any significant reduction from the coalition's current two-thirds majority could spark complaints from within the party and seriously weaken his position. Abe has held the premiership for five years.

The battle is rapidly shaping up as a showdown between Abe and popular Tokyo Gov. Yuriko Koike, who has established a new national-level opposition party, the Party of Hope.

Japan's opposition has been divided since the Democratic Party was voted out of power in 2012, giving the LDP an easy ride in national elections for the past five years. But efforts are under way to corral opposition groups, and Koike's new party has emerged as an umbrella under which they might be able to work together. 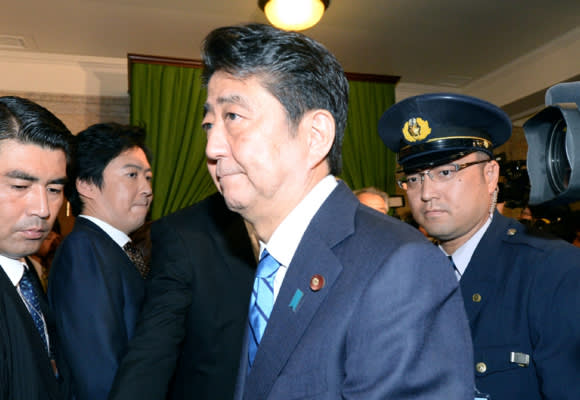 To what extent the Party of Hope can unify the opposition and mount an effective challenge to the LDP remains to be seen, as time is short for the opposition groups to coordinate policies and election strategies.

Abe also hopes to strengthen his political capital through the election, after his support rating tumbled to the 30% range in summer amid accusations of cronyism. The news angered many voters who were already growing frustrated by slow economic growth.

His support ratings have since recovered to around 50% amid mounting tensions with North Korea. Ongoing disarray within the Democratic Party is widely seen as one of the main reasons for calling the election now. The party's leader resigned recently after a resounding defeat in the Tokyo Metropolitan Assembly elections and another top party member has been the subject of widely publicized allegations of having an extramarital affair.