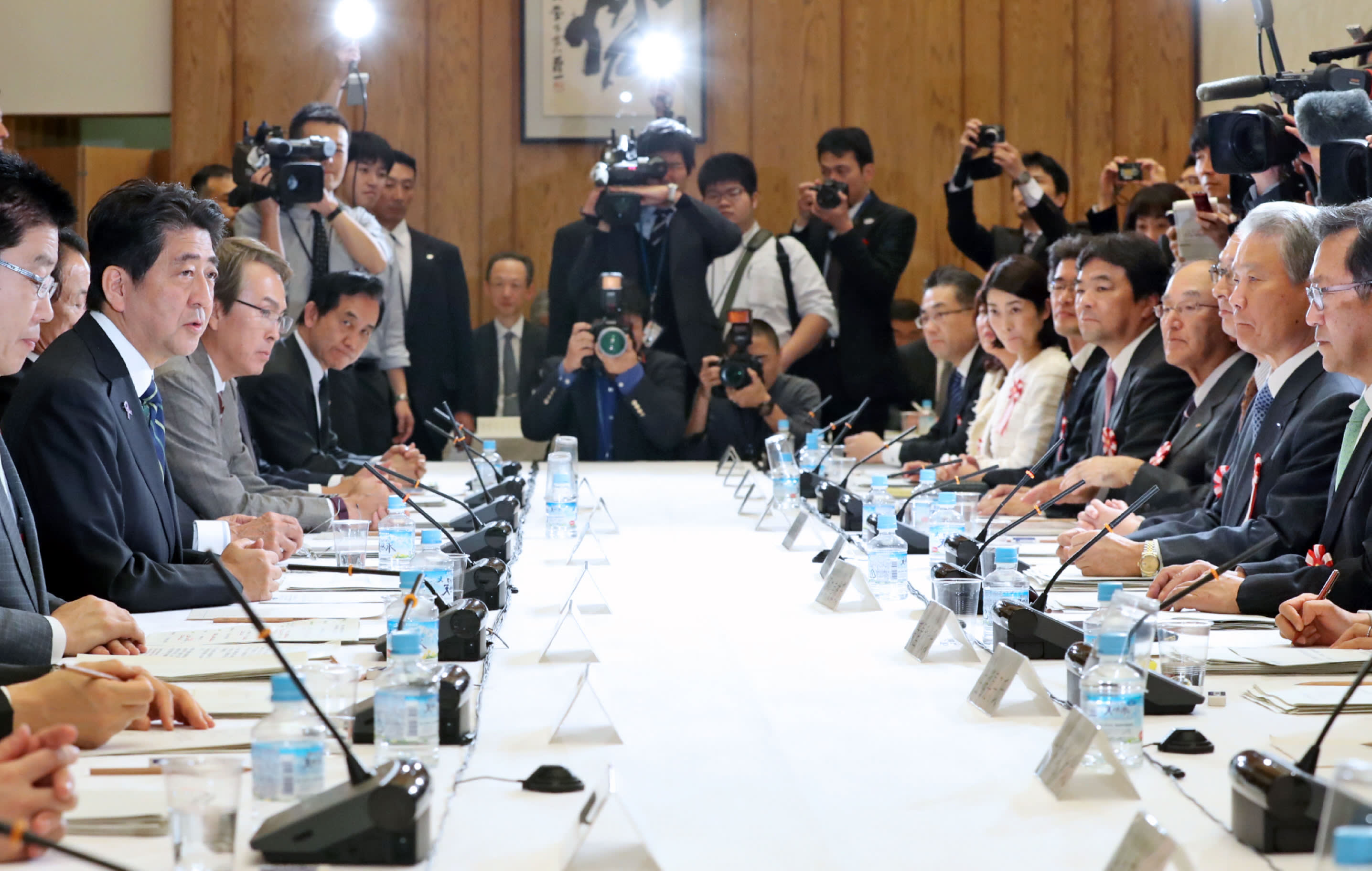 TOKYO -- Prime Minister Shinzo Abe is making a brazen pitch for the fourth consecutive year of wage hikes as other attempts to stoke economic growth fall short, but resistance in the corporate sector remains strong.

"Over the past three years, employers have enacted some of their most extensive wage hikes this century," Abe said. "I am counting on pay hikes at least as big as this year." The prime minister also encouraged pay increases that account for future price growth, as well as measures to promote raises at small and midsize businesses specifically.

Chairman Sadayuki Sakakibara of the Japan Business Federation, also known as Keidanren, was less than willing. "We are not in a position to make strong demands" on its constituent companies, Sakakibara told reporters after the meeting, adding that increasing pay scales "is an extremely weighty matter, given uncertainty" surrounding the outlook for business.

Abe's eagerness to stoke personal spending with pay hikes smacks of desperation. His signature Abenomics policies have hit a wall, with experts suggesting that the Bank of Japan's massive monetary easing is nearing its effective limit. No other quick economic fix is in sight.

Management is hardly thrilled about pay raises next spring, to begin with. The corporate earnings environment has taken a dark turn of late. Listed companies' net profit fell year-on-year for the April-September half for the first time in four years. Major companies such as Panasonic have slashed guidance for the year ending March 2017 as well -- a sharp break with the past three years, when many businesses logged record profit.

Toyota Motor sees group net profit plunging 33% in the year ending March as a strong yen erodes profitability on exports. Chief Financial Officer Takahiko Ijichi said at a recent earnings conference that the automaker would "explain the conditions we face to the labor union and find a solution through discussion," but avoided offering further details.

Companies also argue that wage hikes over the past three years at the government's urging have had little real effect. "We understand the importance of pay raises, but it's a little tough for employers to accept sole responsibility for finding a path away from deflation," an official at a major manufacturer said.

Labor unions are themselves struggling to formulate appropriate pay hike demands. Even in spring 2016, when prospects for earnings were bright, many manufacturing unions pushed for a mere 3,000-yen ($27.50 at current rates) increase in monthly base wages -- around a 1% hike. Toyota workers ultimately left the table with only 1,500-yen raises. The influential Japan Council of Metalworkers' Unions -- composed of labor groups for the automotive, electronics and other sectors -- is seen targeting the same 3,000-yen figure when setting demands this time around.

Price growth, the basis for wage hikes, has weakened. Unions also feel the need to "reduce our demands to a realistic level, given deteriorating corporate earnings," an official at a manufacturing union said.

"We will emphasize wage hikes' sustainability," though "the situation is not ideal," said council chief Yasunobu Aihara, who also leads the Confederation of Japan Automobile Workers' Unions.

Japan's listed companies have a record amount of cash on hand -- more than 100 trillion yen ($916 billion). But the country's corporate governance code, introduced in 2015, encourages the use of those funds to pay shareholder dividends or repurchase shares, rather than to raise wages. Overseas investors are also pushing for higher return on equity, which for Japanese companies often pales in comparison to that of U.S. or European peers. The share of profit going to labor in fiscal 2015 was just 66% or so -- the lowest since 2007, when companies were riding high ahead of the financial crisis.

"It will be tough" for companies to hike wages "in line with what the government is asking," said Hiroshi Watanabe, a senior economist at SMBC Nikko Securities.