NEW DELHI -- Japanese Prime Minister Shinzo Abe arrived in India on Wednesday for a 2-day visit during which he will lay the foundation stone for this country's first bullet train project based on Japanese technology. He is also expected to discuss ways to boost defense cooperation amid China's increasing assertiveness in the region.

Abe, accompanied by wife Akie, landed in Ahmedabad -- a city in Prime Minister Narendra Modi's home state of Gujarat in India's west -- in the afternoon to a grand welcome, with Modi receiving his counterpart with a hug. 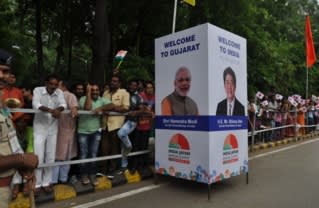 All engagements have been arranged in Ahmedabad and Gandhinagar, the industrial hub and capital city of Gujarat respectively. Abe will not be visiting the Indian capital New Delhi.

This is the second time in three years that Gujarat is hosting a key world leader. Chinese President Xi Jinping too visited the state in September 2014, soon after Modi became Prime Minister.

From the airport in Ahmedabad, Modi and Abe headed to the Sabarmati Ashram -- one of the residences of Mahatma Gandhi -- in a motorcade along a nine-kilometer stretch where students and artistes had put up cultural performances.

Official talks between the two leaders are scheduled for Thursday, as is the ground-breaking ceremony to launch the start of work on a bullet train link connecting Ahmedabad with Mumbai, the capital and financial hub of neighboring Maharashtra state.

The completion deadline is December 2023, but the Indian government now wants to achieve it by Aug. 15, 2022, the 75th anniversary of India's independence from British rule. "All-out efforts will be made to complete it" a year in advance, a government statement said on Monday.

"This would be a historic moment as India will get its first bullet train," said Minister of Railways and Coal Piyush Goyal, adding the new Shinkansen -- Japanese for a network of high-speed railway lines -- technology will ensure more growth opportunities.

"This technology will revolutionize and transform the transport sector of India," he said. "This is an occasion to celebrate the advent of the most modern technology in India. It shall also benefit the farmers for transportation of agricultural produce in a fast mode."

China too is keen to develop high-speed rail networks in India. In 2015, a consortium of companies led by China's national train operator won a contract to carry out a feasibility study for a proposed high-speed rail link between Delhi and Mumbai.

Abe and Modi "will review the recent progress in the multifaceted cooperation between India and Japan under the framework of their 'Special Strategic and Global Partnership' and will set its future direction" during the 12th annual summit of the two countries in Gandhinagar, the capital of Gujarat, on Thursday, according to a statement by the Ministry of External Affairs.

"India truly values the relationship with Japan and we look forward to further boosting our bilateral ties in a wide range of sectors," Modi tweeted on Tuesday.

This will be the fourth annual summit between Abe and Modi since the Indian Prime Minister assumed office in May 2014, and their 10th meeting in the last three years. Most recently the two leaders met on the margins of the G-20 summit in Hamburg in Germany in July.

"The frequency of their meetings clearly points to the high level of importance both sides attach to this partnership," Pranay Verma, Joint Secretary (East Asia) in the Ministry of External Affairs, said on Monday.

Defense and security cooperation too is a key pillar of bilateral relations, especially because of China's growing assertiveness in the region. "There's a strategic angle to it [the visit]," said Shamshad Ahmad Khan, author of the book "Changing Dynamics of India-Japan Relations: Buddhism to Special Strategic Partnership."

India has a lot of concerns over China's assertion in the region including the Indian Ocean and South China Sea, which Japanese have also been experiencing in the East China Sea, he said. "For the diplomatic messaging, India and Japan should make some kind of statement during Abe's visit about this behavior of China."

"There's also the North Korean issue. The country recently conducted its sixth nuclear test and fired a ballistic missile which flew over the Japanese territory. Both India and Japan in their joint statement after the Modi-Abe meeting may condemn the North Korean behavior also," he added.

However, it is not clear whether the two sides will be able to conclude a $1.3 billion deal involving the procurement of ShinMaywa US-2i search-and-rescue amphibious aircraft for the Indian navy.

A joint statement issued after their annual defense ministerial dialogue in early September said the two sides commended the progress made in discussions to identify specific areas of collaboration in the field of defense equipment and technology cooperation. They also "noted the effort made by both countries regarding the cooperation on US-2 amphibious aircraft," it said.

The government said the entire program during Abe's visit reflects an impressive expansion and the deepening of partnership with Japan across wide areas.

It also shows "Japan's increasing engagement in India's infrastructure development and in some of India's flagship initiatives," said Verma, referring to "Make in India" which is aimed at turning the country into a manufacturing hub; "Skill India" which is a campaign to train 402 million people by 2022 for employment; and "Digital India" that will make government services available to citizens electronically.

The Indo-Japan shared values of openness, democracy and respect for the rule of law and high degree of convergence in the political, economic and strategic interests provide an enduring basis for a strong partnership, he said. "We are confident that Prime Minister Abe's visit will present an occasion to demonstrate this concretely."