TOKYO -- Japan's Ministry of Defense has raised the age limit for Self-Defense Forces recruits for the first time in 28 years to make up for a shrinking pool of potential members.

Both job classifications are aimed primarily at high school graduates, who make up most new recruits.

Despite lifting the age limit, the number of applicants is unlikely to rise dramatically, as the declining population creates an increasingly serious personnel shortage. This is pushing the Self-Defense Forces to overhaul their organizational structure and deployment.

In fiscal 2017 ended this March, there were 5,044 new non-fixed-term recruits, slightly below the target. Filling fixed-term slots is even more difficult. The number inducted, at 7,513, was about 20% below the target, the fourth straight year that recruitment has fallen short of the goal.

The ministry gives several reasons for the difficulty in finding new members for the Self-Defense Forces. One is Japan's low birthrate. There were 11 million Japanese aged 18 to 26 as of fiscal 2017, down 40% from the peak in fiscal 1994. And with more young people choosing to go to university, the number of high school graduates seeking employment has also dropped. 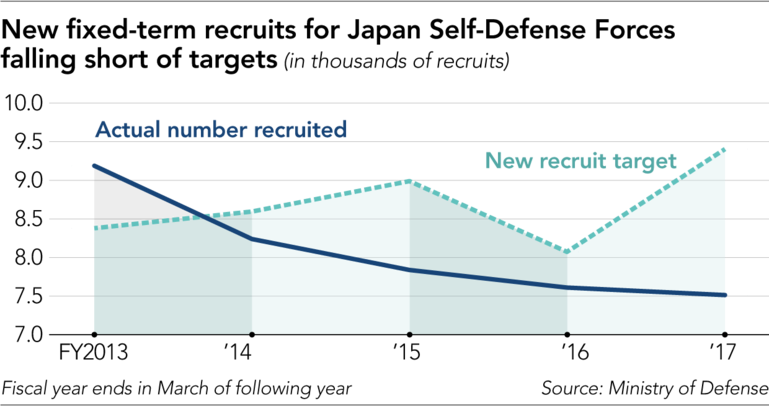 Another reason is the economic recovery, which means more private-sector jobs are available, with better working conditions. SDF personnel tend to lag their civilian counterparts in terms of pay and benefits. A healthier job market makes it harder to attract recruits.

Another reason young people shy away from joining the ranks is that serving is seen as dangerous and filled with hardship. Maritime SDF members, for example, have sea tours that can last several months at a time.

Still another challenge is that SDF personnel can be sent anywhere in Japan. "Among public servant jobs, people tend to choose to be a firefighter or a police officer, [where one] is less likely to be transferred from one area to another," said a Defense Ministry official.

The quota for the SDF as a whole is slightly less than 250,000 people, versus an actual head count of around 230,000. The shortfall makes it difficult to maintain the pace of operations, particularly during natural disasters, as was apparent this year. SDF members are often called upon to help with rescue and relief efforts when floods or earthquakes strike.

When many SDF personnel are dispatched to disaster sites, the burden on those remaining on station increases. Maritime SDF personnel, for example, are forced to sail without full crews, increasing the risk of accidents. 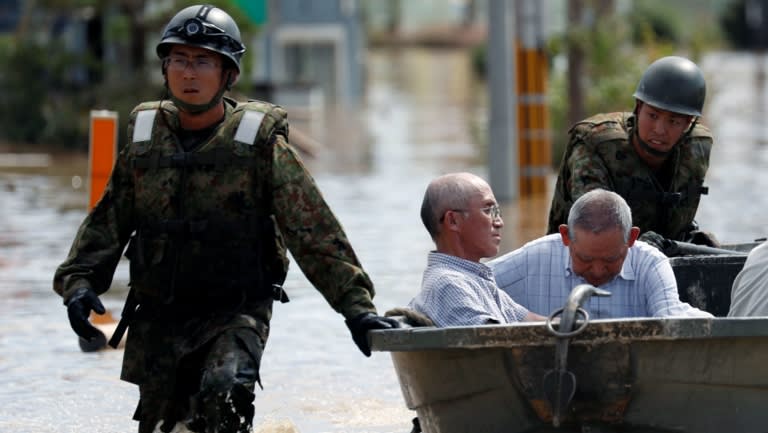 The dearth of recruits is a growing national security challenge for Japan. Prime Minister Shinzo Abe, speaking to a gathering of high-ranking SDF officers on Sept. 3, said, "We are facing big structural changes in society caused by the falling birthrate and aging population, which could be described as a national crisis."

If enticing new recruits is difficult, the alternative is to squeeze more out of the force's current members. The SDF is thus also considering raising the retirement age.

Due to the physical requirements of the job, the retirement age for SDF personnel is set at age 53 to 60, depending on one's rank. This compares with a retirement age of 60 for office workers in the private sector. But raising the age limit on SDF members could hurt its ability to fight.

During the Cold War, the SDF deployed units evenly across Japan to stave off the threat of a Soviet invasion. Because the strategy envisioned using tank units to attack landing sites, the deployments mainly involved ground forces.

But times have changed, and the focus is shifting to defending Japan against missile attacks and other threats. Despite this, the Ground Self-Defense Force makes up 60% all SDF personnel. The allocation between land, sea and air forces remains basically unchanged.

The Maritime and Air Self-Defense forces are unhappy about this, while a high-ranking GSDF officer defends the policy, arguing, "The existence of ground forces across Japan plays a major role in our deterrence," adding, "They are also the main forces that take on disaster relief missions."