Female workers at a home for the elderly in Tokyo's Suginami Ward interact with their children at an onsite day care center during a break on Sept. 8.
HIKARIKO YAZAKI and MIHO GATAYAMA, Nikkei staff writersSeptember 17, 2017 19:23 JST | Japan
CopyCopied

TOKYO -- Graphics showing Japan's female labor force participation rate by age group have always looked like an M as women in their 30s and 40s leave the labor force then re-enter it. But the once-sharp M shape has softened into gentle curves in recent years. 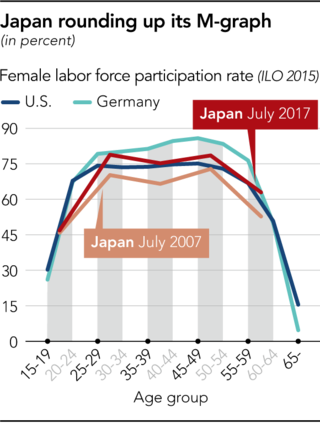 In the U.S. and Europe, charts that show female labor force participation rates look like trapezoids or mountains as high percentages of women work through their 30s.

In 2015, the graph showing Japan's female labor force participation rate was still rather M-ish as compared to those reflecting trends in the U.S., U.K. and northern European countries.

Since then, however, it has been looking more like those of the U.S. and Europe.

This is a historic structural change.

With Japan's population graying and shrinking due to a falling birthrate, a growing number of women, especially those in their 30s and 40s, are joining the labor force.

The surge seems to be taking place for a number of reasons:

The biggest factor behind the trend is that many companies are now making concerted efforts to prevent their female employees from quitting. These efforts include child care leave and other benefits.

In Japan, more than 80% of working women take child care leave after giving birth, although the figure has been trending down a bit.

Some companies are getting creative.

Tsukui, which operates care services and facilities, in February opened a new kind of center -- a nursing home with an on-site child care facility for employees' kids. It is located in Tokyo's Suginami Ward.

Women make up 75% of Tsukui's workforce, and the company hopes the setup can help it to attract and keep workers. "I feel secure because I can go to the day care center during a break to see how my child is doing," a female worker said.

Financial services giant Orix in March 2016 introduced a new personnel system that allows employees to move to another Orix location if their spouse gets transferred.

Aeon to set up nursery schools at malls, supermarkets across Japan

In the past, many Orix employees have had to quit because of a spouse's transfer. "The new personnel system has gone down well with employees because they no longer have to give up their careers along the way," an Orix representative said.

If the employment rate for women age 25 to 44 continues to grow at the current pace, it will reach 80% in 2022," said Hitoshi Suzuki, a senior economist at Daiwa Institute of Research.

A calculation based on estimates by the National Institute of Population and Social Security Research shows that the number of female workers in this age bracket is expected to decline by more than 2 million between 2016 and 2022.

But that decline can be reduced to 460,000 if the employment rate for this demographic rises to 80%. If policy and other efforts push the rate higher still, it may be possible to arrest the fall.

Some experts, however, caution against excessive optimism. There is still the matter of kids having to fulfill a prerequisite before being accepted to nursery school -- being placed on, then making their way through, a long waiting list.

"For the M-shaped curve to be completely resolved," said Junko Sakuyama of Dai-ichi Life Research Institute, "nursery school shortage will be a hurdle."

The number of children on nursery school waiting lists has grown to more than 26,000 -- up from 21,000 in April 2014. This is due to the number of female workers rising faster than the national government had expected.

Although the government has plans to help the day care industry accommodate an additional 220,000 children, progress in urban areas has been slow.

If Japan Inc. wants to increase the number of its female workers, it will have to redouble efforts to reward them with higher wages and better family benefits. A sticking point -- wage growth remains sluggish.