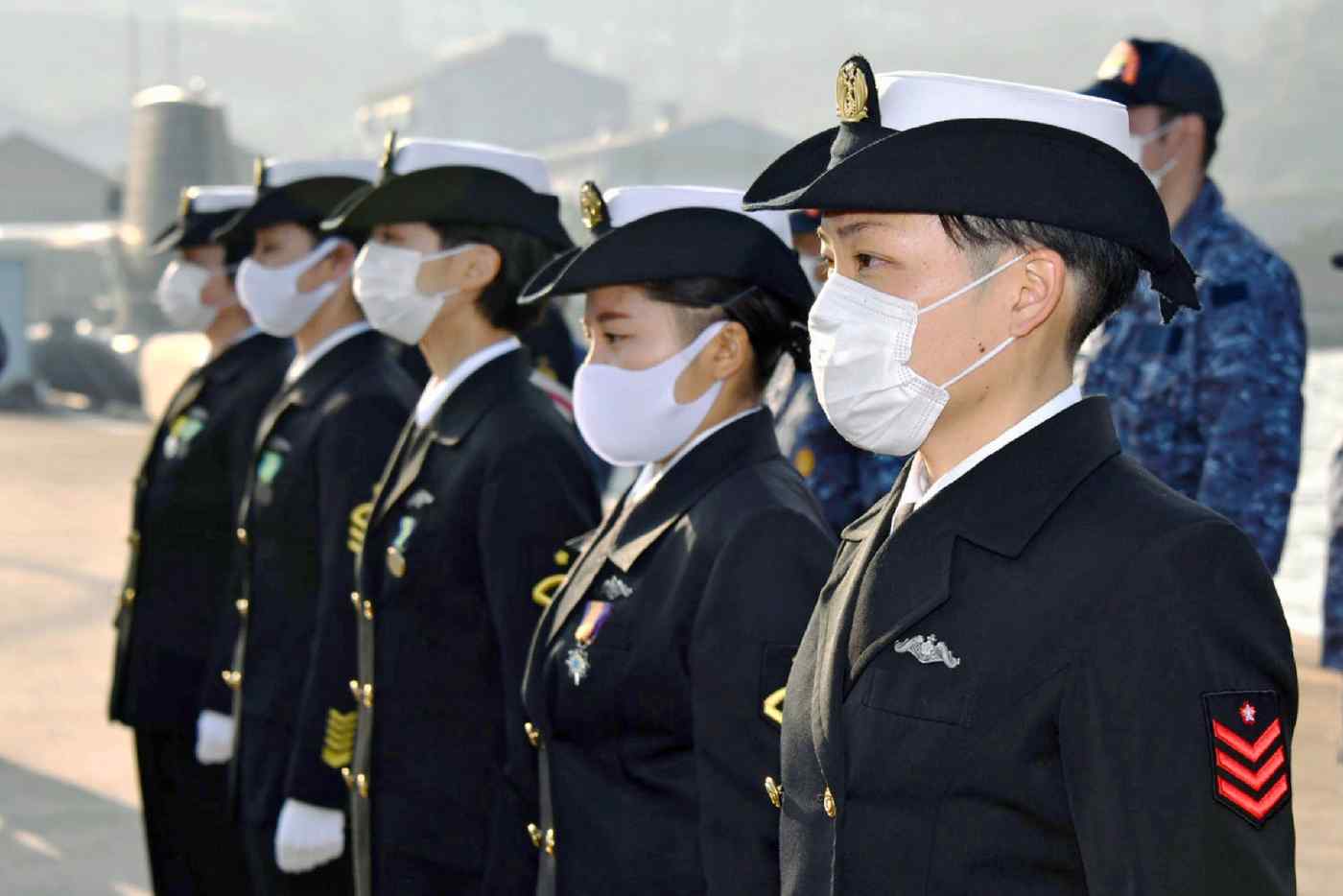 It was a big ask because Japan's Self-Defense Forces have fallen on hard times.

The group, which includes Seishiro Eto, former director-general of the now-defunct Defense Agency, knew this. So members told Kishi they were also seeking someone who could champion the need for more troops and a bigger SDF budget, enough to enable Japan to better deal with military threats posed by China and North Korea.

It asked Kishi to take on that role.

All three SDF branches have been hit hard by Japan's declining birthrate. For six consecutive years now, through fiscal 2019, the ground, maritime and air units have fallen short of their fixed-term recruitment targets, making it difficult for Japan to meet the challenges of the 21st century.

Aegis ships are destroyers with cutting-edge defense capabilities. The ships, which reportedly can shoot down ballistic missiles, have been proposed as an alternative to the land-based Aegis Ashore missile defense system that Japan had planned to deploy before giving up on the idea.

The ships are now expected to play a pivotal role in missile defense. But each one requires about 300 crew to operate, which is why the Maritime Self-Defense Force is unwilling to add more to its fleet. This is what prompted the parliamentary group to request personnel and budget increases.

Japan's defense spending hit a record high of 5.313 trillion yen on an initial basis in fiscal 2020, when the country was the world's ninth biggest spender on defense, according to the Stockholm International Peace Research Institute.

But the recruiting difficulties have some LDP lawmakers worried: Is Japan becoming unable to strengthen its deterrence capabilities?

Japan has to defend itself with fewer troops than any of its neighbors, though it is strongly allied with the U.S. and can rely on its 1.3 million-strong military. Japan's ruling Liberal Democratic Party wants the MSDF to add two Aegis ships as part of a missile defense system, but each destroyer requires a crew of about 300.

Official cadets are mostly high school graduates who serve for two to three years; they make up the largest group of recruits. After their two or three years are up, about 60% of the recruits in recent years have been choosing to stay on.

While general sergeant/petty officer candidates serve until they retire sometime in their 50s, official cadets can decide whether to continue serving. Thus the SDF must go up against private companies to keep up their numbers.

There is another dynamic at work, according to one PR official: More high school students want to go to college.

"It is important to secure the [targeted] number of recruits," a Defense Ministry recruitment official said, "but we cannot substantially lower the criteria for admission. It is difficult to secure both quality and quantity."

The number of applicants remains higher than the SDF's recruitment targets, but not all of them have the requisite aptitude, the official said.

Raising the age limit is merely a Band-Aid, however, as the number of children in Japan remains on the decline. In 2018, the number of 18- to 32-year-olds stood at 19.03 million. The number will dwindle to 17.5 million in 2028 and to 15.63 million in 2038, according to a forecast by the National Institute of Population and Social Security Research.

With fewer troops having to secure the same amount of territory, the SDF's workload is increasing. China is adding to the burden as its warships often back up Chinese government ships that repeatedly intrude into Japanese territorial waters around the Japan-administered Senkaku Islands, which China claims and calls the Diaoyu. As China's maritime operations grow more assertive, Japan will have to answer with more SDF vessels.

The SDF also keeps an eye on North Korea, its missile launches, and its offshore deliveries of crude oil and coal that contravene a United Nations resolution. In 2020, Japan began dispatching a destroyer to the Middle East to help secure one of the world's most integral shipping lanes.

These added responsibilities are falling on the shoulders of the Maritime SDF, which is suffering from a particularly serious personnel shortage. In 2018, it could not even reach 60% of its recruitment target, the worst performance among the three SDF branches. This reflects the severe working environment for service members forced to do long stints at sea.

If Maritime SDF members feel neglected, then an incident in October did not help. After five months at sea, a destroyer returned to a Japanese port, but its crew had to remain on board for days due to the coronavirus. The Maritime SDF is suffering from a particularly serious personnel shortage, with the number of new recruits for fiscal 2018 failing to reach 60% of the target.

The Maritime SDF is trying to ease regulations so its destroyer crews can more easily email and otherwise remain in touch with their loved ones. "We want to recruit young talent by telling them about the attraction of working at sea," a Maritime SDF official said.

The Air SDF, which keeps watch over violations of Japan's airspace, has similar problems. Young people do not want to work at remote radar outposts. "Jobs that involve frequent transfers to rural areas are unpopular among service members, and a personnel shortage for such jobs is particularly serious," a source close to the SDF said.

"With globalization, talented young people are now recruited not only by domestic companies but also by overseas companies, and the Self-Defense Forces will find it more difficult than ever to attract people," said Robert D. Eldridge, who served as the deputy assistant chief of staff at U.S. Marine Corps Bases Japan until 2015, after having taught at Osaka University as an associate professor. "It is necessary to take measures, such as providing an internship program, to have young people take an interest in the SDF."

In his recent book on Japan's declining population and the SDF, Eldridge makes 15 proposals, including increasing salaries for SDF personnel, raising the retirement age and reducing overseas assignments.

The SDF is promoting the recruitment of women to cope with Japan's declining population, and Defense Minister Kishi has talked about "helping female SDF members show their ability."

But students interested in the SDF are mostly male. Men account for more than 80% of SDF applicants for many types of jobs. If more female students were to gain an interest, the recruitment base would expand considerably.

Women are already taking on more roles in the SDF. In March, the Ground SDF for the first time assigned a woman to its paratroop unit. In the event of an emergency, paratroopers would be parachuted near the front line. Meanwhile, in the Maritime SDF earlier this year five women became submarine crew members for the first time.

In its budget request for fiscal 2021, the Defense Ministry has allocated 5 billion yen ($48 million) to improve the working environment for female SDF members. The funds will be used to build women's toilets and bathrooms and create female-only spaces aboard warships.

At the end of March 2019, women accounted for 6.9% of all SDF members, an increase of 2 percentage points or so from 10 years earlier but a far smaller percentage than at private companies. This means the SDF has a lot of room to accommodate more female cadets.

Over the past five decades, the U.S. armed forces have raised the percentage of female members to 16% from 2%. In 2015, they opened more doors to women, allowing them to take combat positions that allow for faster promotion. Some officials within Japan's Defense Ministry are studying the U.S. armed forces' approach as they consider how to improve the SDF.

After World War II, national security discussions were taboo in Japan, and the SDF was regarded as "an organization that must not stand out." In one incident, a mayor refused the residency registration of an SDF member.

But society's perception of the SDF has changed little by little thanks to participation in international cooperation programs and disaster-relief activities.

In a Nikkei mail-in public opinion survey for 2019, 60% of respondents said the SDF can be trustworthy, the highest score among eight institutions and professions presented in the survey, including courts, police, prosecutors and teachers. Despite gaining this level of public trust, the SDF still has trouble recruiting members.

Repeated scandals may be one reason. One of the biggest came when it was learned that SDF units dispatched overseas, including to Iraq, tried to hide the fact that service members were at risk of being involved in combat activities prohibited by Japanese law.

Meanwhile, the number of cases in which members are disciplined for power harassment or injury-inflicting violence is on the rise.

The fact that it is an organization designed to wield force makes it imperative for the SDF to prevent internal scandals. Needless to say, it will also be important to enforce discipline as the Self-Defense Forces introduce drones, promote women and take other measures to prosper in an era of declining birthrates.