Japan's National Security Council (NSC) was established this past Dec. 4. On Dec. 17, the National Security Strategy and the new National Defense Program Guidelines were adopted by the Cabinet. Some people question these decisions, wondering why they have to be made now, but they may actually have come too late, considering the worsening security environment surrounding Japan. I would like to consider the significance of these moves. I would like to first take up the National Security Strategy. Prime Minister Shinzo Abe set up the Advisory Panel on National Security and Defense Capabilities on Sept. 12, asking the panel to take part in devising a national security strategy and drawing up new National Defense Program Guidelines.

National security depends on diplomacy and defense, but, oddly enough, Japan had no proper basic documents that covered the two areas of activity crucial to its security policy. A document called the Basic Policy on National Defense was adopted in 1957, but it is a document of 56 years ago. It is important to show the direction of a new security strategy appropriate for present-day Japan. Furthermore, nowadays more countries have disclosed their own security strategies because it has come to be understood that doing so is more effective in obtaining public understanding and avoiding misunderstandings by nearby countries.

As the basic concept of the recently formulated National Security Strategy, Abe hammered out "proactive pacifism" based on the principle of international cooperation. Proactive pacifism contrasts with passive pacifism, which posits that the less militarized Japan is, the more peaceful the world becomes. When the Japanese constitution was enacted in 1946, many of the Allied nations thought so. But Japan is now a major power regarded as important by other countries in the world. Simply doing no wrong is no longer sufficient.

This proactive pacifism is not a sudden turnaround. Japan has offered official development assistance to Southeast Asia and other regions since the 1950s and thus contributed to regional stability. It has participated in United Nations peacekeeping operations since 1992. And in the late 1990s, it advocated the concept of human security and has since helped overcome poverty around the world. All these are manifestations of proactive pacifism and we are now trying to push it further. 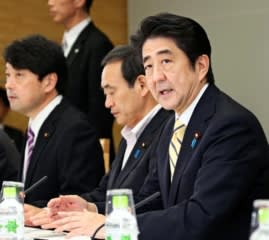 In this sense, the Abe government has accepted Japan's postwar diplomacy in a positive light and is developing it further. And it is doing so not by itself but within the framework of international harmony. It has won the support of many countries around the world with a few exceptions, such as China and North Korea.

Some people say the National Security Strategy focuses on hardware, but they are mistaken. The strategy is essentially a policy that emphasizes the maritime rule of law and seeks to cooperate with countries that share universal values with Japan. It therefore focuses on "software" (regime, policy, etc.). The document even states that Japan should invite young people from developing countries and have them learn about Japan as a proven development model so that they may become pro-Japan leaders in their own countries. It further states that Japan should always keep the door open for dialogue with China.

However, it is also important for Japan to enhance its defense capabilities in preparation for possible crises. The new National Defense Program Guidelines introduce the new concept of integrated flexible defense capability, which emphasizes integrated operations of the ground, maritime and air self-defense forces as well as the defense of the southwest area.

As a means of expanding this capability, the guidelines call for increasing the number of aircraft, Aegis destroyers and submarines, while reducing the number of tanks. Under the guidelines, defense capabilities in terms of aircraft and warships will be strengthened from those under the previous guidelines of 2010. The guidelines also call for an increase in the defense budget. Although the increase is small compared with defense budget growth in China, it is an important move for Japan to show its resolve.

I was chairman of the national security and defense capabilities panel, but I am not fully satisfied with the National Defense Program Guidelines. For example, the full troop strength of the Ground Self-Defense Force is to be increased by 5,000 to 159,000, but I believe it should instead be reduced and the equipment of the maritime and air self-defense forces further expanded. I also wanted to incorporate in the guidelines capabilities for counterattacks against enemy bases. At the same time, I wanted to include more flexible attitudes toward China, including calling for the resumption of dialogue on historical issues. However, these proposals were not adopted.

The creation of the NSC had been on the agenda since the previous Abe government. A persistent problem in Japanese political institutions is their vertically segmented structures. Japanese bureaucrats have strong allegiance to their organizations and strongly resist pressures and demands from outside.

For the NSC, there were criticisms that such an organization, if created, would not be free of the impediments of vertical segmentation. Of course, the problem will not be easy to eliminate, but ministries and agencies will each bring policy proposals and materials to the council and discuss them together. It is certainly better than the status quo, in which they bring predetermined policies and only make minor adjustments together.

The essence of security is dealing with unpredictability. Outwitting the enemy is fundamental to the art of war. Other factors important for security are technological innovation and attention to structural changes around the world. I would expect the NSC to work actively, using its imagination, to deal with all crises under the National Security Strategy, which outlines Japan's security policy.

The next task is laid out in the discussions of the Advisory Panel on Reconstruction of the Legal Basis for Security, where I serve as deputy chairman. The issue is not just collective self-defense. The panel also discusses matters related to the right of individual self-defense that do not involve constitutional interpretation but do not find stipulations in the legal system. For example, if Japan comes under armed attack, the government must order a defensive operation. However, such an armed attack refers to a full-scale military invasion by another country, and there are no stipulations about how to deal with a lesser invasion.

As for the right to collective self-defense, we are merely maintaining that Japan should be allowed to exercise the right; we are not saying it should actually exercise it. Whether the country actually exercises the right would be a highly political decision.

Domestic opponents of collective self-defense resort to accusing the government of "trying to drag its citizens into a war," but such worries are groundless. If Japan started a war without due consideration, its government would immediately be removed from power. Since politicians fear such an outcome more than anything else, they will act with the utmost caution.

The view that the U.S. wants to wage war is also mistaken. At present, the U.S. is trying to distance itself from conflicts in the world if possible. The stance may be a little different in Asia, but the U.S. wants to avoid conflict with China. The country will likely continue this stance over the long term. Japan's alliance with the U.S. is always accompanied by concern here that the country could be drawn into a U.S.-led war as well as concern that it could be abandoned by the U.S. At present, Japan should be concerned more about the latter, though it is not very likely.

The security legislation panel's activities are ongoing. The panel hopes to submit recommendations by this spring, leading to a revision of the Guidelines for Japan-U.S. Defense Cooperation, a move agreed on by Japan and the U.S. at a "two-plus-two" meeting of foreign and defense ministers from both countries.

Shinichi Kitaoka, president of International University of Japan and a professor emeritus at the University of Tokyo, is former deputy permanent representative of Japan to the United Nations.