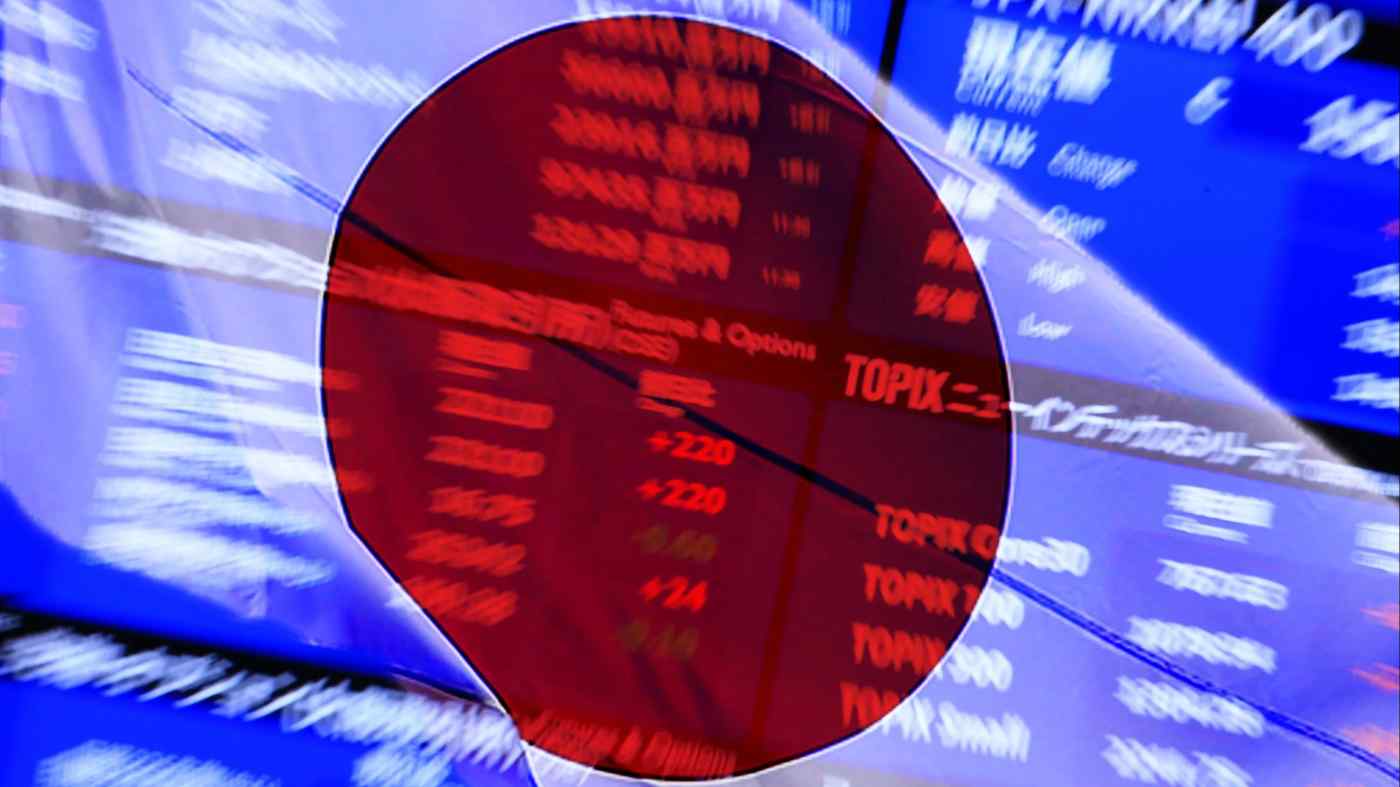 TOKYO -- Japan's new rules on foreign investment in domestic companies, which the government claims are vital to national security, will scare off foreign investors and hinder efforts to improve corporate governance even though both are central to Prime Minister Shinzo Abe's reform drive, investors and analysts have warned.

Legislators passed the Revisions to the Foreign Exchange and Foreign Trade Control Law on Nov. 22, with the new rules expected to take effect next spring.

Tokyo says its new rules correspond to similar moves by allies, aimed primarily at keeping China from gaining access to sensitive technologies. However, analysts warn that the new law could trigger massive capital outflows, delivering a blow to Abe's government.

"The Japanese government will continue welcoming your investment," a senior Finance Ministry official stressed at a recent meeting with foreign institutions. But as an employee at one foreign brokerage said afterwards: "I wish they had communicated with us much earlier."

The proposal emerged this summer after the Donald Trump administration enacted a law giving the U.S. government more powers to block China from stealing American technology. Under pressure from Washington, Tokyo says it was forced to rush through a similar law. 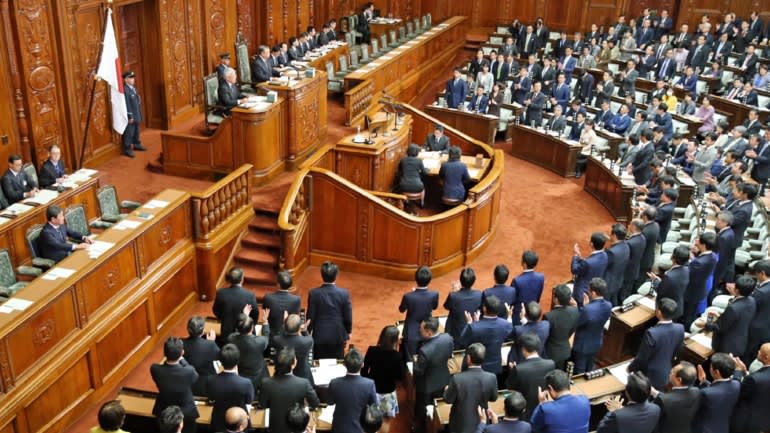 Currently, foreign investors in Japan must obtain regulatory approval if they buy 10% or more of a company. The new rule lowers the threshold to 1% and has provoked a fierce backlash.

"I have never seen so many investors show such concern about one issue regarding Japan," Jamie Allen, secretary-general of the Asian Corporate Governance Association (ACGA), which represent activist funds like Oasis Management and Elliot Management, said.

"Our members have expressed that they will think twice before investing in Japan now. Japan hasn't thought through the impact."

To allay investor discontent, the Finance Ministry said foreign institutional investors that do not pose a security risk -- such as established investment funds -- will be exempted. Finance Minister Taro Aso has also promised that his ministry will "consider measures to lessen the burden." Nevertheless, investors remain wary.

"We don't get the timing. And we question why a bill, on such a serious issue of national security, had been so rushed," Allen said.

The 1% rule was proposed by the Ministry of Economy, Trade and Industry, based on worries by some Japanese companies about foreign interference. Despite grumblings from investors, the bill sailed through the Diet. Its passage coincides the coming peak of the annual general meeting season, when activists often make their concerns heard.

According to data by IR Japan, an investor relations consultancy, the number of shareholder proposals has lately risen to record levels.

Companies recently in activists' cross-hairs include electronics company Olympus, which has given U.S. activist fund ValueAct Capital a seat on its board; Sony, which has so far resisted calls by active investor Daniel Loeb to streamline operations; and beverage maker Kirin, which has been pressured to sell its non-beer operations.

But the categories can be gamed easily.

One market player said that Category 1 companies will be targeted by short sellers, as investors will shy away from them. One U.S. hedge fund manager said he has already started shorting companies likely to be on the list.

It is also questionable whether the Finance Ministry will be able to categorize all the roughly 3,600 Japanese listed companies by the time the law goes into effect.

Furthermore, companies that collect personal data, such as online services providers, could be subject to the 1% rule. One such company planning to go public has been advised that it is likely to be in Category 1, which has greatly dimmed its IPO prospects, a senior executive said.

Lastly, there are concerns that the new law will undermine corporate governance reforms, as foreign investors will have to pledge not to involve themselves in major management decisions, such as selling operations or changing board members.

"If you want to protect your company from foreign investors, all you have to do is manufacture guns or software," said a company executive.

While the government claims it does not intend to curb activists, the law nevertheless restricts their rights, precipitating a possible exodus of global investors, whose buying of Japanese securities has kept afloat Abe's reflationary economic policy.

The government seems to be aware of this. Tetsuro Kubo, chief compliance officer at FIL Investments Japan, notes that there have been significant improvements to the original proposal. "The remaining challenge is for government [to implement the law] in a way that minimizes the impact on the capital market," he said.

Either way, Japan insists the rule changes are about China and forms part of a coordinated international effort to thwart Beijing's technological and economic ambitions.

"We have been strongly encouraged by our allies, and had no choice but to avoid becoming a weak link in the chain," said a senior Japanese government official.

But countries are taking different approaches.

Masahisa Ikeda, a partner at U.S. law firm Shearman and Sterling, said one key difference is that Western countries have adopted an after-the-fact approach to prevent investments that threaten national interest. In contrast, Japan deals with all foreign investors equally, including those who do not pose a threat.

A Japanese official defended Tokyo's before-the-fact approach arguing that: "in order for review of previous investments to be effective, the country needs to have the same intelligence gathering capability as the U.S." 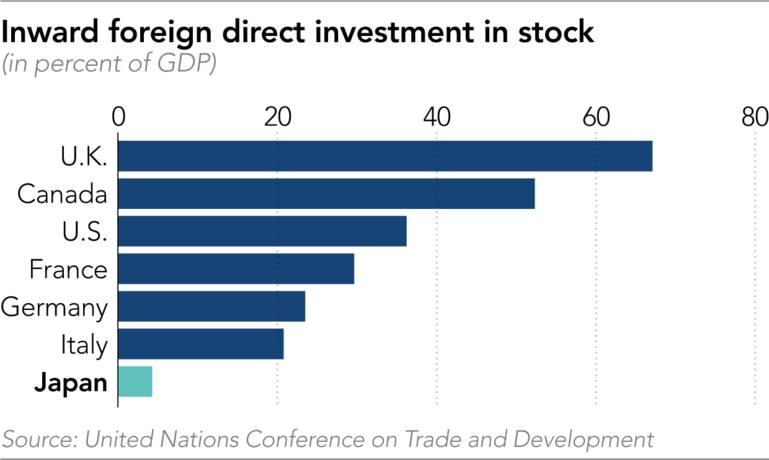 Be that as it may, the new law coincides with a surge of activist investor in Japan propelled by the perception that there is a huge gap between many companies' actual value, what they are potentially worth, and many boards unwillingness to act.

"The lack of value creation by Japanese corporations is the reason for activists pouring into the market," said Ryohei Yanagi, who teaches corporate governance and investor relations as a visiting professor at Waseda University. "They see an opportunity to unlock value."

A stark illustration of that is how companies in Japan's benchmark Topix index trade typically at book value, whereas FTSE 100 companies trade at twice book value and those in the S&P 500 trade at three times book.

According to Yanagi, this is largely because 15% of Japanese firms, excluding financials, hold cash and securities on their balance sheets worth more than their market capitalization.

"There are a lot of companies in Japan that could be targeted by activists," said Shirou Terashita, CEO and president of IR Japan Holdings.

Even before the new law was proposed, global investment flows into Japan were low. According to the United Nations, the ratio of foreign direct investment to gross domestic product is 36% in the U.S., 67% for the U.K., and just 4.3% in Japan.

In dealing with China's technology and intellectual property theft, Japanese policymakers therefore need to strike a balance between security and attracting foreign investment, especially as demographic decline threatens the economy.

"Sooner or later, Japan will find it necessary to develop a separate system dedicated to monitoring foreign investments that really threaten national security," said a senior executive at a foreign fund management company.