Lead Japanese trade negotiator Toshimitsu Motegi sought to reassure ruling party lawmakers Aug. 29 that Tokyo had not conceded too much in talks with Washington. (Photo by Wataru Ito)

TOKYO -- Japan and the U.S. have put together a "balanced" trade deal that "protects our national interests," lead Japanese negotiator Toshimitsu Motegi told officials from the ruling Liberal Democratic Party on Thursday.

Cuts to tariffs on agricultural products, a politically sensitive issue, "are within the range of past economic partnership agreements," Motegi said.

LDP lawmakers present at the meeting raised no objections. How Prime Minister Shinzo Abe's party responds to his broad agreement with U.S. President Donald Trump this past Sunday to conclude a trade deal on goods will determine its prospects for passing Japan's parliament and entering into force this year.

The LDP body in charge of trade agreements had pushed Motegi not to make concessions beyond the terms of the Trans-Pacific Partnership, which includes major beef and dairy exporters Australia and New Zealand but not the U.S. Trump withdrew the country from the agreement in 2017.

Motegi indicated that there are agreed-on reductions smaller than in the TPP.

On the cuts to American duties on industrial goods sought by Tokyo, he assured lawmakers that negotiators "will achieve tariff eliminations and reductions in line in accordance with Japan's interests." 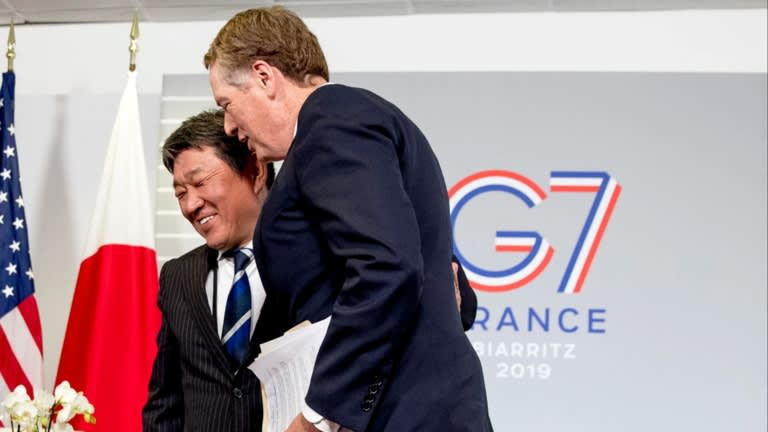 Abe and Trump announced the agreement on the sidelines of the Group of Seven summit in France, with an eye toward signing a finalized version in September. Tokyo aims to have it approved by parliament during the upcoming session this autumn.

"We're working on the final details with the U.S. side to ensure consistency with World Trade Organization rules," said Kazuhisa Shibuya, a senior policy coordinator with the Cabinet Secretariat. The WTO says free trade agreements should eliminate barriers on "substantially all" trade in affected goods, typically taken to mean at least 90% or so.

But uncertainty remains as to whether Washington will impose additional duties or numerical quotas on Japanese auto imports on national security grounds.

"We want to deal with this issue properly in the final stages of the negotiations," Motegi told reporters Tuesday. "We conveyed this to the U.S. side and got their understanding."

Asked about such tariffs earlier this week, Trump said he was not thinking of imposing any "at this moment." But the auto industry's concerns have not been fully put to rest.

After Trump and Abe met last September to discuss negotiating a trade deal, the two sides said in a statement that the U.S. and Japan would hold talks "based on mutual trust" and "refrain from taking measures against the spirit of this joint statement during the process of these consultations."

Abe confirmed with Trump at that meeting that this meant Washington would avoid imposing more tariffs while talks were ongoing.

The two leaders are set to meet again next month on the sidelines of the United Nations General Assembly in New York. Abe will seek to secure a pledge from Trump to refrain from putting up barriers to Japanese auto imports even after the deal is signed.