Tokyo Gov. Yuriko Koike, leader of the new national Party of Hope, speaks to reporters in Tokyo on Sept. 27. (Photo by Koji Uema)

TOKYO -- Tokyo Gov. Yuriko Koike's new party has issued a direct challenge to the ruling Liberal Democratic Party, receiving a show of support from Japan's leading opposition Democratic Party, whose chief Seiji Maehara said that he will pursue a de facto merger with Koike in the upcoming snap election.

If the two parties unite, it would mark the largest political reshuffle since 2003 when the previous Democratic Party merged with the Liberal Party to try and oust the powerful LDP.

During a press conference on Wednesday morning, Koike announced her party's intention to field candidates from across the country in the election, expected on Oct. 22. The governor, flanked by 14 members of the Diet, said she intends to retain her current post while also leading the party. "I will prepare for the success of the 2020 Olympics and Paralympics as Tokyo governor," she said.

Asked who her party would nominate for prime minister after the election, she said she would "consider it later."

Under the discussed merger, Maehara proposed to party lawmakers on Wednesday that Democratic candidates in next month's snap election would run under the banner of Koike's Kibo no To, or "Party of Hope," either by receiving its endorsement or by switching parties entirely. Maehara himself could run as an independent. 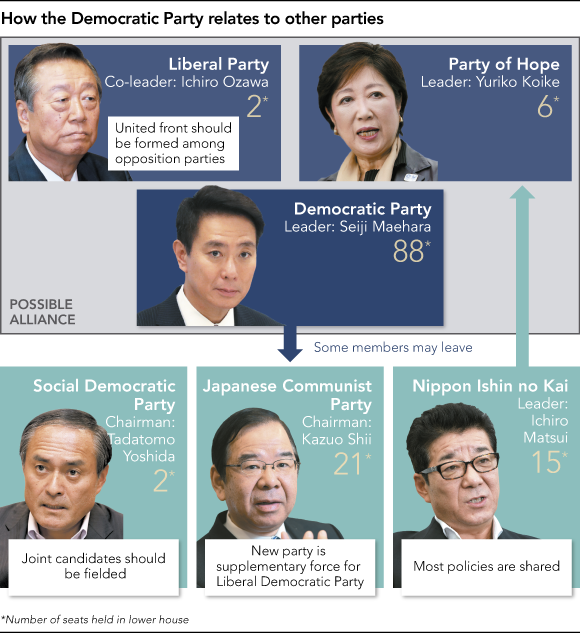 The proposal is the latest in the Democratic leader's efforts to engineer a realignment to reduce competition among opposition parties within districts and more effectively compete with Prime Minister Shinzo Abe's LDP.

Maehara discussed the merger with Koike on Tuesday night. An intergration with the smaller Liberal Party led by Ichiro Ozawa is also under consideration.

How to handle the affiliations of incumbent upper house lawmakers would be decided after the election. The popular governor described her Kibo no To, or "Party of Hope," as "a new conservative party with tolerance and the spirit of reform." This is one of the party's six key founding principles. The others: transparency; the protection of lives and property; realistic diplomacy and security policies; wise use of taxpayers' money; and the creation of a society that allows for diverse lifestyles.

As for election strategy, Diet member Goshi Hosono said the party would put together its list of candidates over the next week. Hosono, who defected from the Democratic Party, said the Party of Hope has received numerous requests from potential candidates. "We believe we can field enough candidates as a national party," he said.

The party representatives did not wade into policy details. However, regarding Abe's plan to raise the consumption tax in October 2019, they suggested it would be difficult. "Before debating the tax hike, we need to discuss how to make the Diet more efficient," said Masaru Wakasa, another key member. Cutting the salaries of lawmakers would be one such step, he added.

Constitutional reform is also on the agenda. Hosono said the Party of Hope wants to discuss this from a broad perspective, noting that Abe is mostly focusing on the war-renouncing Article 9.

Koike zeroed in on Japan's weakening global competitiveness. She noted that the University of Tokyo has dropped in international university rankings, while Japanese companies have slipped in market value rankings. Her party, she said, wants to restore Japan's position as a world leader.