Japan shifts focus of its development assistance to Indo-Pacific

Countering China, Tokyo sends over 70% of its aid to region TOKYO -- Japan is making economic cooperation with the Indo-Pacific region a diplomatic priority, with more than 70% of its official development assistance going there.

The move is rooted in Tokyo's unease with Chinese President Xi Jinping's Belt and Road Initiative -- a massive program of investment in ports and railways in Asia and Africa.

The Japanese government is also looking to switch the focus of its aid to "quality" from "quantity" in places where Japanese businesses can easily make inroads. It intends to expand its Indo-Pacific strategy to cover the Middle East and Africa, starting from Southeast Asia.

Japan's Ministry of Foreign Affairs is planning to draw up its fiscal 2019 budget requirement by the end of this month, with 60% being directed to development assistance -- a significant part of the country's diplomatic activity.

In 2016, more than 70% of the assistance was spent on the Indo-Pacific regions, in line with the "Free and Open Indo-Pacific" strategy promoted by Prime Minister Shinzo Abe. Behind the assistance seems to be an awareness of China's BRI -- a country that was once the largest recipient of Japanese aid.

Japan's aid budget in 2016 totaled $16.8 billion, of which bilateral assistance accounted for $13.5 billion. More than 70% of the bilateral assistance was for countries and territories located along the Indian and Pacific oceans. By region, Asia drew the largest chunk of the aid at $7 billion.

India was the No.1 recipient by value, at about $1.8 billion, followed by $1.6 billion for Vietnam and $0.6 billion for Iraq. Other Indo-Pacific nations, such as Bangladesh, Myanmar, Thailand and Indonesia were next in line.

In terms of grant aid, not including loans, Afghanistan drew the largest amount of assistance at $267 million. 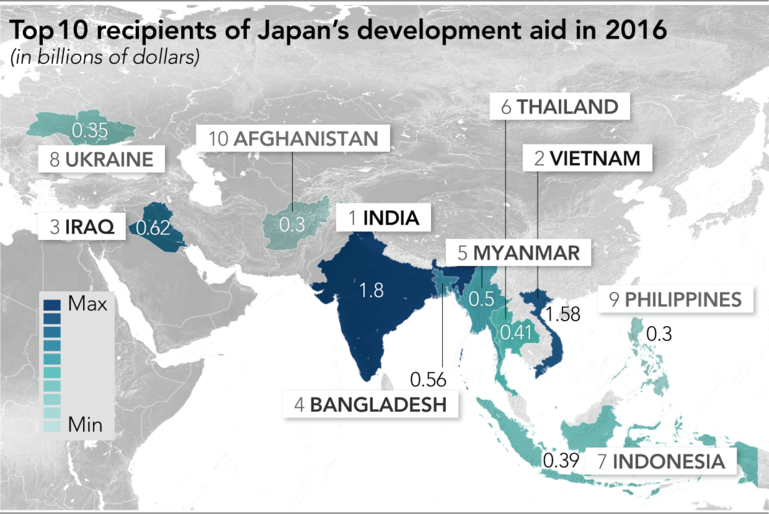 Abe promoted Japan's assistance strategy during the Tokyo International Conference on African Development (TICAD) in August 2016. The scheme is aimed at deepening cooperation in infrastructure development, trade, investment, maritime security and other areas with countries in the Pacific and the Indian Oceans.

The Indo-Pacific region is home to more than half the world's population and has enormous potential for economic growth.

The Japanese government has condemned China for offering loans to developing countries beyond their repayment abilities, thereby saddling them with debt and pressuring them to concede countries to give it economic interests.

In December 2017, Sri Lanka granted a Chinese company a 99-year lease to operate its southern port of Hambantota. China also set up a military base in the northeastern African country of Djibouti in August that year.

China used to be the biggest recipient of Japanese assistance, but Japan ended its grants of yen loans to China in 2007 as the latter's economy was growing fast.

Although Japan plans to expand its Indo-Pacific strategy, it cannot compete with China in terms of capital, so it is bringing the U.S. and Australia on board.

Foreign ministers of the three countries agreed at a meeting in Singapore on Aug. 4 to promote the development of high-quality infrastructure in the Indo-Pacific region.

They are seeking to cooperate in the development of ports and human resources in the region and establish a framework that will allow them to counterbalance China in terms of financial power and business scale.

The Japanese government's total aid budget has halved since its peak in fiscal 1997, in part due to financial constraints.

Foreign Minister Taro Kono on July 25 held a discussion involving experts to review the framework of Japan's aid program. Kono ordered participants to submit proposals to the ministry by the end of this year, saying that improvements could be made in the way the country's official assistance is managed.