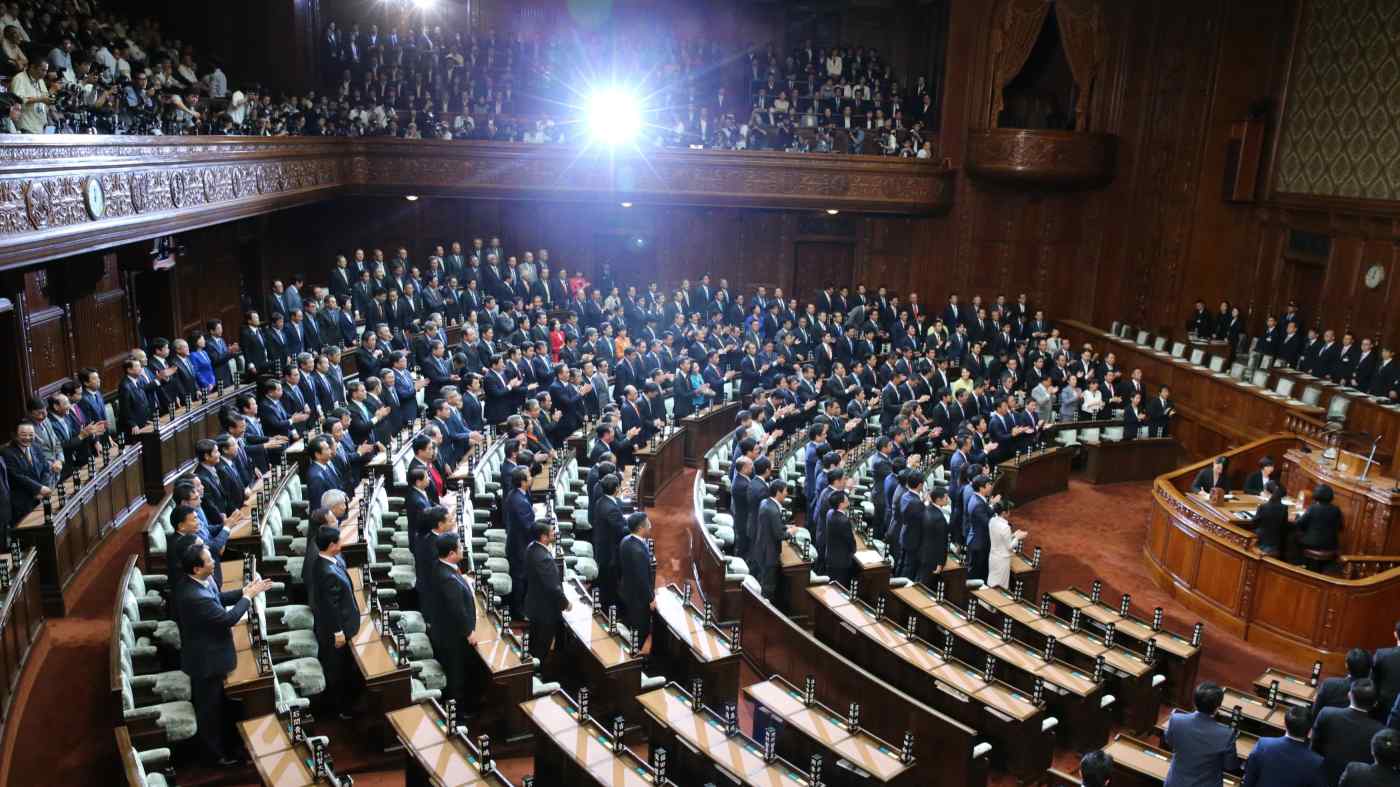 TOKYO -- Japan's ruling and opposition parties are gearing up for a general election that must be held in the next six months as the four-year legal term of the lower house ends in October.

Speculation is rife about when Prime Minister Yoshihide Suga will dissolve the house for a snap poll. While history indicates it can come any time, Suga is facing a raft of challenges including the coronavirus pandemic and the Tokyo Olympics, all of which may prevent him from taking the step until shortly before the end of the term or even force him to let the term expire.

The government has put Tokyo, Kyoto, Okinawa, Osaka, Hyogo and Miyagi prefectures under stricter coronavirus prevention measures until May 5 at the earliest because of a sharp resurgence of the virus. This means that Suga had effectively ruled out the dissolution of the lower house until at least May 5, as he continued to stress that the government's top priority was on virus prevention.

But opposition parties are already spoiling for a fight. A senior official of the Constitutional Democratic Party of Japan said the country's largest opposition party was "ready for battle."

Of all the 25 lower house elections that had been held since May 1947, only one took place at the natural end of term, in 1976 when Takeo Miki was prime minister. The other 24 were all held because the lower chamber was dissolved.

The average number of days between election day, when the term of a lower house starts, and the dissolution of the house, is about 1,000. The members of the current lower house who were elected in October 2017 have already served for more than 1,200 days as of April 1. History shows that the time is ripe for another election. The 2009 election was held closest to the expiry of term. Then Prime Minister Taro Aso, now deputy prime minister and finance minister, dissolved the house on the 1,410th day, less than two months until the end of the four-year term.

Aso's move was widely seen as desperate, his hand forced by low poll ratings partly due to what was perceived as his poor handling of the economic downturn triggered by the global financial crisis that began in 2008. The ruling Liberal Democratic Party took a drubbing in the election, allowing the now defunct Democratic Party of Japan, then the largest opposition party, to come into power.

An analysis of data shows that the governing party tends to lose seats in elections held late in the term.

But the reality is more complicated. The 1990 lower house poll was held after the LDP lost a majority in the upper house for the first time in 1989 amid a public backlash over the introduction of a consumption tax and a "stock-for-favor" scandal. Despite the loss of seats, political pundits said the LDP had staged an unexpectedly resilient performance in the general election.

In 2000, the LDP managed to maintain a comfortable majority despite strong resistance to gaffe-prone Prime Minister Yoshiro Mori then who drew approbation for making a comment about the emperor being at the core of the nation, given as the monarchy is largely a ceremonial role under Japan's constitution.

The lower house served the shortest term in 1953, when a vote of no-confidence was made against the cabinet of then Prime Minister Shigeru Yoshida after he muttered "bakayaro" (idiot) while answering questions during a Diet session. The house was dissolved only five months after election. November is the month during which the largest number of lower house dissolution occurred -- four. Three took place in each month of June, September, October and December. The lower house was dissolved eight times in the first six months of the year and 16 in the second half. The four last months of the year account for more than half of the total.

This is because the Diet session is convened in January and the budget bill for the fiscal year starting in April and many other important pieces of legislation are usually under discussion in the first few months of the year.

This year, the calendar is looking even fuller than usual, despite the pandemic. Key events that could have major political impact include the Tokyo metropolitan assembly election on July 4 and the summer Olympic Games that are slated to start on July 23. The Paralympics is scheduled to end on Sept. 5.

Suga's term as LDP president ends in September. The nation's vaccination program is expected to be expanded to the general public around summertime.

Nerves are already fraying over the upcoming election. In a Japan Broadcasting Corp. (NHK) program on March 28, Jun Azumi, the Diet affairs chief of the CDP, said the party will prepare a no-confidence motion against the Suga cabinet.

LDP Secretary-General Toshihiro Nikai responded to Azumi's remark by saying he would call on Suga to dissolve the lower house for a snap election if such a motion is submitted to the Diet. Immediately afterward, CDP Secretary General Tetsuro Fukuyama made a "bring it on" gesture, saying the opposition party would be ready to fight if the prime minister dares call an election during the pandemic.

When Suga decides to dissolve the house is anybody's guess. With only six months left to the end of the term of the lower house, however, it may already be too late for him to make the move as a political offensive.