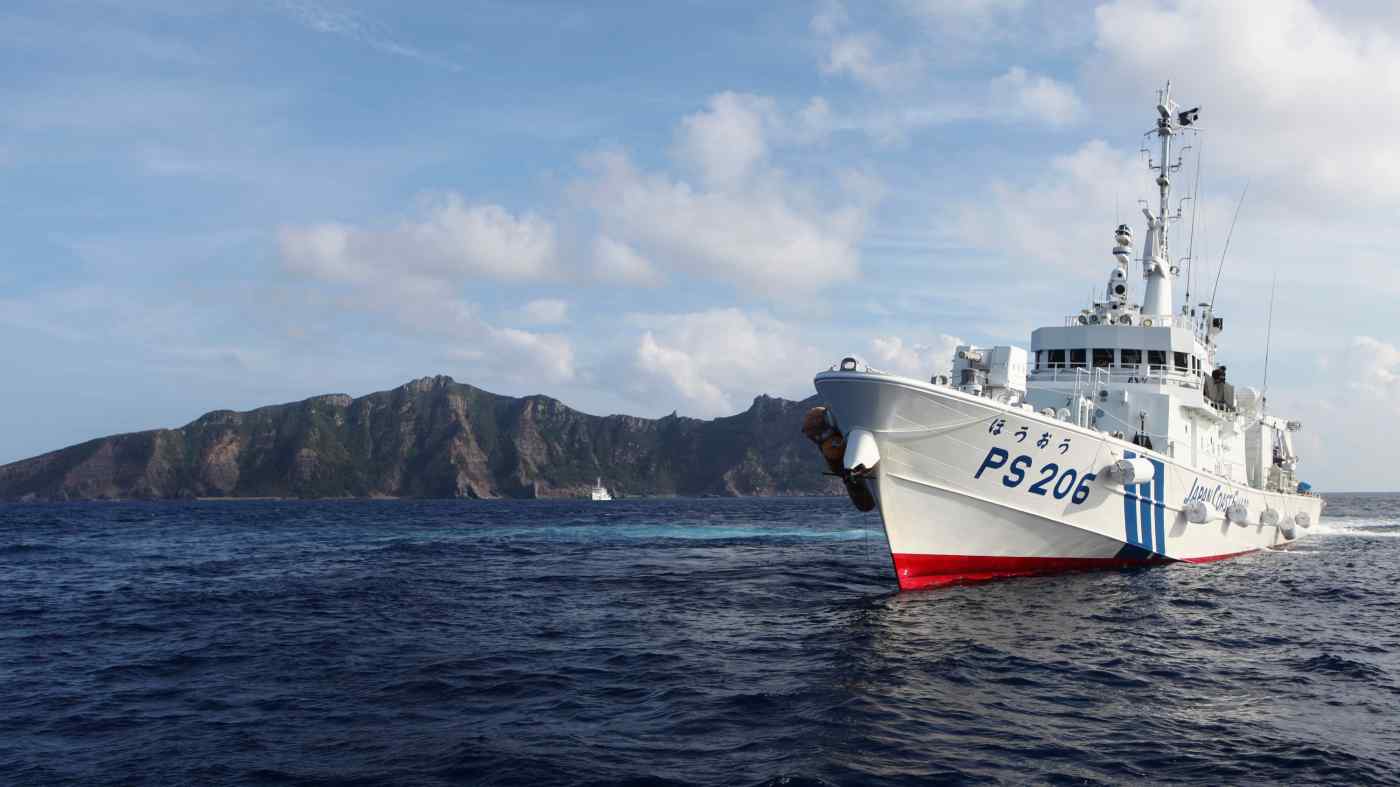 TOKYO -- Japan will expand its fleet of large coast guard patrol vessels around the Senkaku Islands by nearly half before April 2023 in response to the record number of Chinese ships that have sailed through those waters this year.

Tokyo aims to assign 22 ships of 1,000 tons or larger to the East China Sea chain. Twelve vessels are tasked with patrolling the Senkakus at present, while three more are stationed in the area for other purposes, such as watching for illegal operations by North Korean fishing boats.

Japan looks to boost security and surveillance in the area, responding to an unprecedented surge in Chinese forays there this year. The Senkakus are governed by Tokyo and considered to be fully part of the nation's territory but claimed by Beijing as the Diaoyu.

A total of 1,135 Chinese government ships have entered the contiguous zone around the Senkakus this year as of Monday, topping the record set last year when the tally broke 1,000 for the first time since the Japan Coast Guard began keeping track in 2008. Some Chinese vessels sailed into the islands' territorial waters, potentially putting Japanese fishing boats at risk.

Some observers think Beijing has been emboldened by the geopolitical power vacuum created by the coronavirus pandemic and the U.S. presidential election.

Japan's draft budget for fiscal 2021, which begins in April, earmarks 21.2 billion yen ($205 million) to bolster security in territorial waters including around the Senkakus. The money will be used to build new patrol boats and buy helicopters.

To keep as many vessels active as possible, the coast guard will assign the equivalent of four crews for every three ships, rotating personnel out as needed for rest.

The Maritime Self-Defense Force plans to cooperate with the coast guard around the Senkakus, including by flying patrol aircraft and sharing information, in light of Chinese military activity in the area. In June, a vessel believed to be a Chinese submarine was spotted near the island of Amami-Oshima, north of Okinawa.

The issue has become a national security concern for Tokyo. Beijing last month released draft legislation that would explicitly allow for Chinese coast guard vessels to use weapons against foreign ships engaged in illicit activities in its waters. Other measures, such as detention and towing, also could be taken against foreign ships considered to have illegally entered Chinese waters.

The Japan Coast Guard had 66 vessels of 1,000 tons or more at the end of March -- about half as many as its Chinese counterpart, which operated 130 as of December 2019. Tokyo looks to boost its fleet of large patrol craft to 77 by fiscal 2024.

China has grown more assertive diplomatically as well. During a visit to Japan last month, Chinese Foreign Minister Wang Yi reasserted Beijing's claim to the islands and sought to justify its actions in the area.

"The fact is that recently some Japanese fishing boats of unknown origin have repeatedly entered the sensitive waters off the Diaoyu Islands, and China has to make necessary response," he said.

Japanese Foreign Minister Toshimitsu Motegi said soon afterward that Wang's statement was "of course based on China's position concerning the Senkaku Islands, and is completely unacceptable."