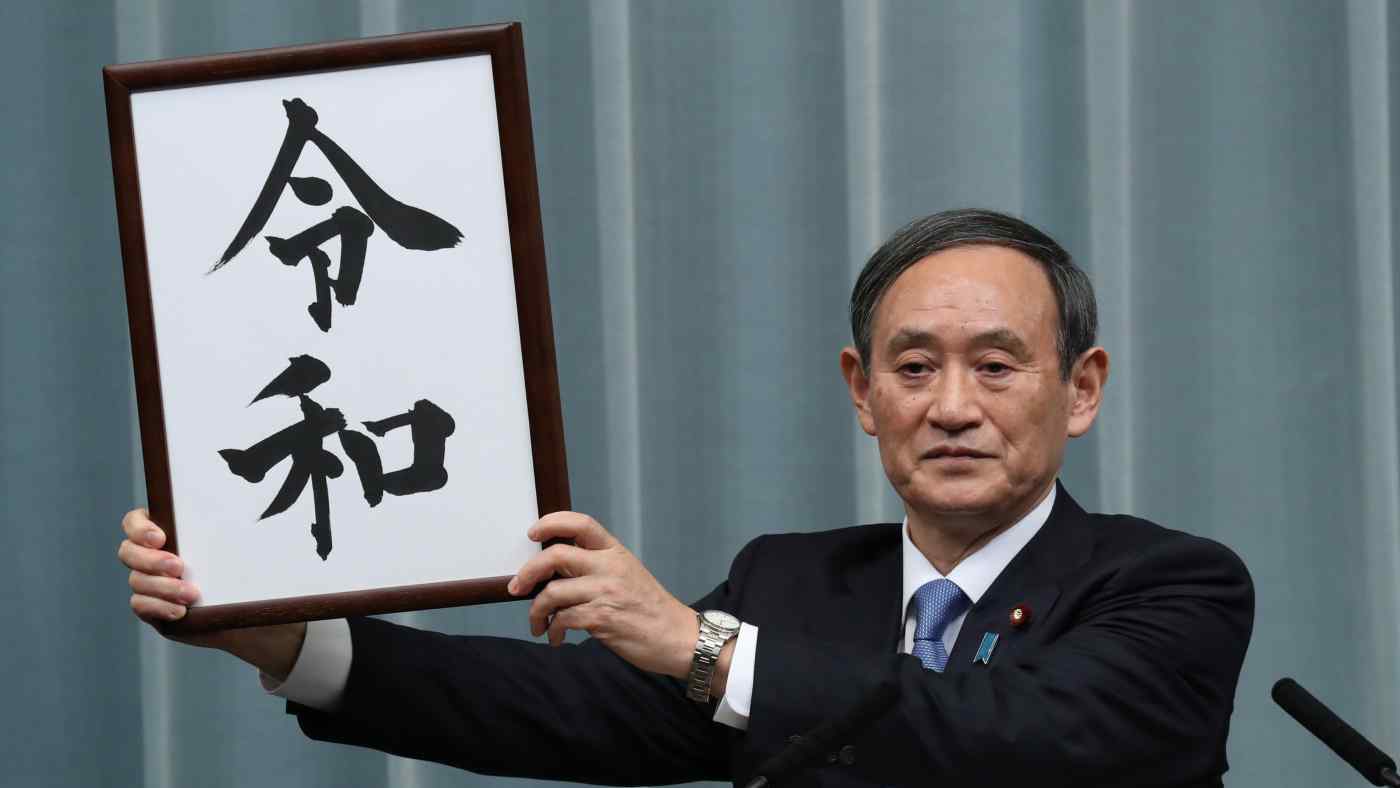 TOKYO -- Japan unveiled the name of the nation's new era as "Reiwa" on Monday, the first time a phrase from Japanese literature has been used to describe a new emperor's reign.

The announcement by Chief Cabinet Secretary Yoshihide Suga followed the cabinet's approval, and comes one month before Crown Prince Naruhito ascends the throne on May 1 to officially begin the new era.

The phrase is taken from the Manyoshu (around 600-759), the oldest existing anthology of Japanese poetry, rather than the names of previous eras that have come from Chinese literature.

The character for rei can be roughly translated as "auspicious" or "orderly" and wa means "harmony" or "peace."

Following the announcement, Prime Minister Shinzo Abe said that by referencing the Manyoshu, which reflects the variety of seasons and nature, he wanted to pass on Japanese heritage to the next generation.

"I want Japan to proudly bloom like plum blossoms," Abe told reporters in Tokyo. "Plum blossoms bloom beautifully after a harsh winter as a sign of the arrival of spring."

Abe added that the use of the term from the anthology was important because it was compiled from songs from not only nobles but also lower level officials and farmers. The prime minister added that he wished the name would support a sense of unity in Japan, and help promote reforms. 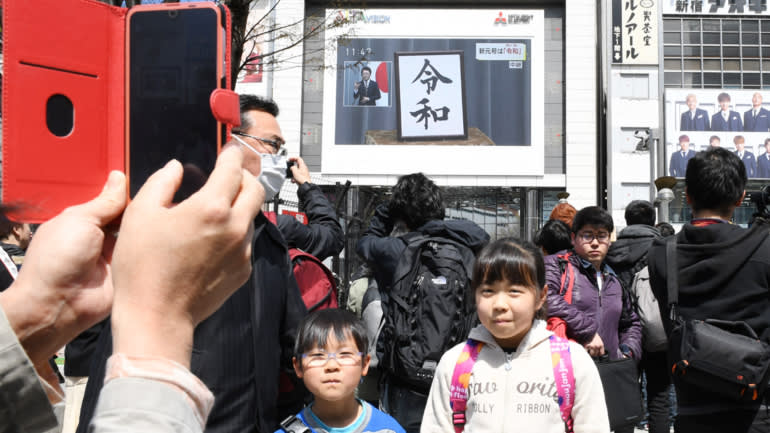 People take selfies in front of a TV screen announcing the new era name in Shinjuku, Tokyo, on Monday (Photo by Karina Noka)

Japan still uses the Imperial calendar -- often alongside the Western calendar -- for official documents such as driver's licenses, and for the dates of newspapers and other publications. The system has deep roots going back for more than a millennium in Japan, with the names being used to describe periods of history.

For example, the Showa era (1926-1989) symbolizes a tumultuous period that began with Japan's militarization and World War II, followed by the nation's rise from the ashes of defeat and its transformation into a global economic power. The Heisei era (1989-2019) is known for the collapse of the bubble economy followed by years of deflation, as well as the March 11, 2011 earthquake, tsunami and Fukushima nuclear disaster.

Tetsuji Atsuji, a scholar of Chinese characters in Kyoto University, said the rei character "conveys an image of seasonality with the change in emperor as well as the joy of peace."

Rei can also mean "order" as the character shows someone saying something to a kneeling person, Atsuji said. He added, however, that the new era name gives the "gentle impression of bringing peace to the world."

Nearly 120 residents of Henari, a village in Gifu prefecture which has the same Chinese characters as Heisei, attended a public viewing on Monday to watch the announcement.

"Reiwa has the same character for wa as my name does," said a smiling Kazuyoshi Tabata, a 64 year-old farmer from the area. "I hope the new era will be better than Heisei." 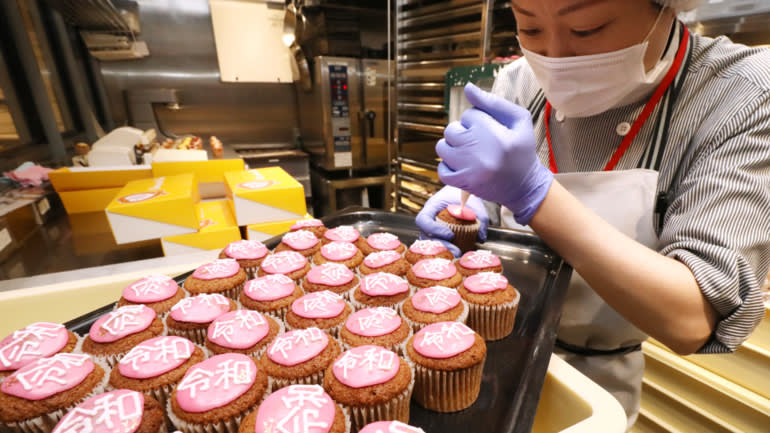 Emperor Akihito, current head of Japan's Imperial House, will be the first emperor to abdicate in modern Japan. Monday's announcement is also the first time the name of an era was publicly released before a new emperor's enthronement. The cabinet spent months considering proposals from scholars of Japanese and classical Chinese literature, and Japanese and Oriental history.

The suggestions were then discussed by a panel of nine experts, including Nobel Prize laureate and Kyoto University professor Shinya Yamanaka. The speaker and vice speaker of the upper and lower houses of the Diet, Japan's legislative body also gave their opinions.

The new era name was chosen from six candidates, according to a person familiar with the matter.

The Heisei era -- its name derived from Chinese classical literature and roughly meaning "achieving peace" -- began in 1989 at a time when the economy was booming and Japan felt on top of the world. That same year, Sony acquired Hollywood's Columbia Pictures and Mitsubishi Estate bought New York's iconic Rockefeller Center -- both symbols of the country's amazing recovery after rising from the ashes of World War II.

However, the good times soon ended. The bubble economy collapsed and the country endured the "lost decades" -- nearly 20 years of economic stagnation starting around 1992. When the global recession of 2008 hammered the economy, the Nikkei 225 Index dropped to 7,054 points in March 2009, more than 80% off its historic peak in 1989.

The announcement even boosted some Japanese stocks on Monday. Book seller Bunkyodo Group Holdings jumped as much as 29% on expectations that people will buy copies of the Manyoshu anthology, and advertising company Ray Corp., which sounds like rei, rose as much as 19%. As the Reiwa era dawns, the economy is doing better, but its pulse may be weakening. On March 20, the Cabinet Office flashed warning signs amid slowing exports to China, though domestic consumption remained solid in the 2018 October-December term.

The Reiwa era will also see Japan grapple with its aging population, which is causing a labor shortage that threatens growth. This has pushed Abe to implement policies to put more women in the workplace and allow a greater number of foreign workers into the country.

Japan has had 247 era names since instituting the system under Emperor Kotoku in 645, and since the Meiji era (1868-1912), there has been one era for each emperor. The current year of 2019 is called Heisei 31 in the Japanese calendar, but from May 1 the year will be called Reiwa 1.

People in Tokyo's bustling Shibuya district were checking the news on smartphones around the time of 11:30 a.m. announcement.

"The character for wa conveys a very calm impression," said 19-year-old college student Asahi Kokubun. "I hope there will not be a war [involving Japan] in the Reiwa period, like in the Heisei era.