The government-own land in Osaka sold to a private school at a suspiciously large discount.   © Kyodo
March 23, 2017 04:40 JST | Japan
CopyCopied

TOKYO -- With the head of the nationalist school operator at the center of a widening political scandal slated to testify before Japan's parliament Thursday, lawmakers hope to get answers to some of the many questions still surrounding the affair.

Clearing up a shady deal 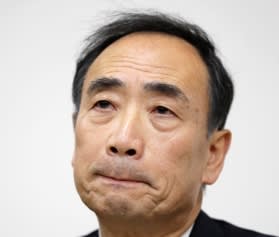 Diet members questioning Moritomo Gakuen chief Yasunori Kagoike will likely put particular weight on the school operator's purchase of government-owned land in the Osaka Prefecture city of Toyonaka. After signing a contract to lease the plot to build an elementary school, Moritomo Gakuen told the Finance Ministry's regional bureau last March that buried waste had been discovered at the site.

The government ultimately agreed to sell the land to the school operator for just 134 million yen ($1.2 million), to be paid in installments -- far less than the appraised value of 956 million yen. The difference was chalked up to cleanup costs.

It remains unclear why the government accepted these terms. Kagoike apparently contacted the regional finance bureau repeatedly, a point about which he may go into more detail Thursday.

Opposition lawmakers note the possibility of pressure from politicians on Moritomo Gakuen's behalf. Records from the office of Yoshitada Konoike, a Diet member from the ruling Liberal Democratic Party, show numerous visits by the school operator regarding the land sale. Konoike denies doing anything to facilitate the deal.

Plans to open the school have since been scrapped, and Kagoike intends to resign as head of the school operator.

Osaka Prefecture's handling of the licensing process for the school is also suspect. The prefectural government initially deferred a decision on Moritomo Gakuen's application in December 2014, citing doubts about the school operator's finances and a curriculum tinged with nationalism. But the license was granted the following month at an extraordinary meeting of the prefecture's private-school committee.

Osaka Gov. Ichiro Matsui has said that Finance Ministry representatives repeatedly pushed for a decision. Questions have arisen over the fact that the prefectural government relaxed standards for opening elementary schools in 2012 after receiving a request to that effect from Moritomo Gakuen. Political pressure may have played a role here as well.

The scandal could ensnare Prime Minister Shinzo Abe, Abe's wife Akie, and Defense Minister Tomomi Inada, depending on how Kagoike describes his relationships with the three.

Kagoike said last Thursday that Abe donated 1 million yen to Moritomo Gakuen through Akie. Abe has asserted that neither he nor his wife contributed any money to the school operator. Yet the Toyonaka school was originally to be named after the prime minister -- a point the school operator used when raising money -- and Akie was named honorary principal but resigned after the scandal arose. Kagoike's emphasis on a close relationship with the prime minister may have influenced decisions made by central and prefectural government officials.

Inada denied any involvement with Moritomo Gakuen during Diet questioning, but she was forced to walk back this assertion after it was found that she appeared in a court as an acting representative for the school operator in 2004. The defense minister has said she cannot recall any contact with Kagoike within the last decade -- a claim contradicted by Kagoike's wife, who says her husband and Inada met two years ago. These competing accounts will need to be reconciled.

Documents submitted by Moritomo Gakuen for subsidies and licensing for the Toyonaka school have raised eyebrows as well. The school operator reported construction costs of 2.38 billion yen to the Ministry of Land, Infrastructure, Transport and Tourism; 756 million yen to the prefectural government; and 1.55 billion yen to the operator of nearby Osaka International Airport. Kagoike will likely be pressed to explain these discrepancies, which may have allowed the company to illegally claim subsidies.

Thursday's testimony will take place across two roughly two-hour sessions: one before the upper house budget committee in the morning and one before its lower house counterpart in the afternoon. Kagoike will then hold a news conference at the Foreign Correspondents' Club of Japan. "We don't know what Kagoike will say," said a wary senior official of the ruling party.

Opposition lawmakers plan ask government officials involved in negotiations with Moritomo Gakuen to provide unsworn testimony in order to get a full accounting of the scandal.