Workers at a Honda motorcycle factory in the Vietnamese province of Vinh Phuc, northwest of Hanoi

HANOI -- The Japanese government is teaming up with educational institutions to launch schools in Southeast Asia, aiming to help Japanese companies that are expanding in the region and are in need of talented young workers.

The governments of Japan and Vietnam on Friday jointly opened a postgraduate course at Vietnam National University in Hanoi. The program, a tie-up with renowned Japanese schools such as the University of Tokyo, Kyoto University and Osaka University, will award master's degrees in the environment, nanotechnology, public policy and other subjects. The program has attracted 73 students this year. 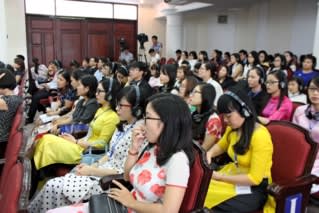 Students enrolled in a new postgraduate course offered through the Vietnam-Japan University Project attend an entrance ceremony in Hanoi on Sept. 9.

This is the first program launched by the Vietnam-Japan University Project, a joint effort by the two governments that aims to develop competitive local talent that will meet the needs of Japanese businesses. The next plan is to start an independent university by 2022 for both undergraduate and postgraduate studies, for a combined 6,000 students. Courses will be provided in Vietnamese, Japanese and English.

The number of international schools is on the rise across Asia, but many of them have been led by U.S. and U.K. establishments. In Thailand, however, the Thai-Nichi Institute of Technology, launched in 2007 in Bangkok, has attracted locals who want to learn Japanese-style manufacturing. Thailand is home to more Japanese businesses than Vietnam or Indonesia.

The Japanese government, hoping to export educational know-how, is backing the trend by developing the necessary infrastructure. This summer, the country's ministries of education, industry and foreign affairs, together with the education industry, launched a public-private initiative for the export of Japanese-style education. The framework aims to bring expertise in programs, teamwork, discipline and other areas to developing economies, with the hope of increasing local productivity.

In the Cambodian capital of Phnom Penh, Ciesf, a Tokyo-based nonprofit organization, and others in late August opened the first international school in the country that focuses on Japanese-style education. The school provides classes in Japanese for students from kindergarten through ninth grade, in accordance with Japanese educational criteria. Those who complete the program will be eligible to study at high schools and colleges in Japan.

In Vietnam, a Japanese-style international school began operating on Tuesday, funded by local businesses, including major property developer Him Lam and cement manufacturer Xuan Thanh Cement. The school partnered with Japan's Chuo University for educational content. Tadashi Yamada, a professor at the Japanese university, serves as the school's principal.

Binus University in Indonesia is considering starting classes in areas such as auto engineering and computer-aided design with support from Aso College Group, an educational institution based in Fukuoka Prefecture in southwestern Japan. In addition to technical skills, Japanese lecturers will teach typical practices in the Japanese manufacturing workplace, such as the importance of punctuality as well as continuous improvement efforts known as kaizen.

More than 11,300 Japanese companies have established bases in Southeast Asia, according to Japan's Teikoku Databank. The need for manager-level local personnel is increasing among those businesses.