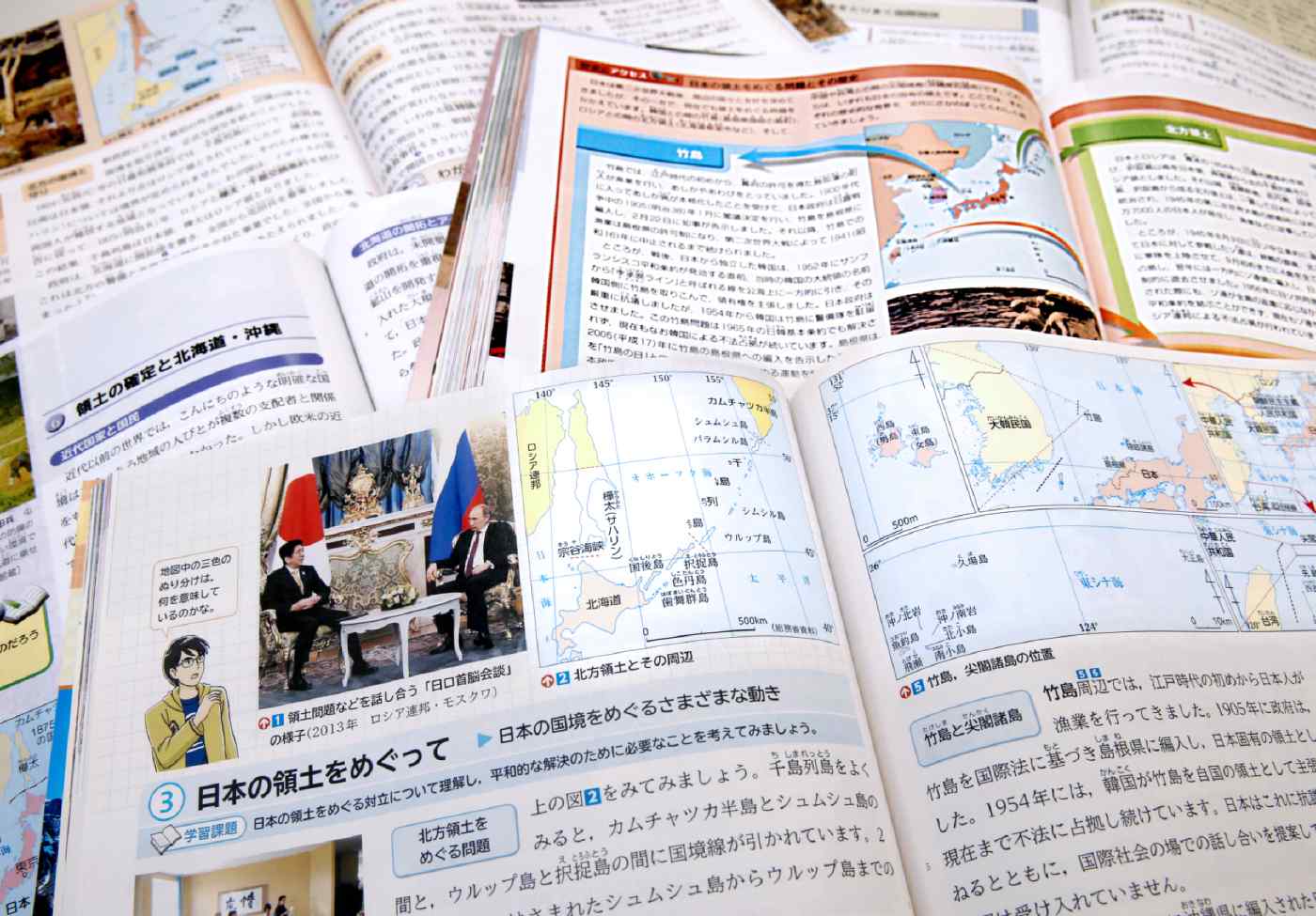 The textbook in the foreground says South Korea is illegally occupying the islets known as Takeshima in Japan.
April 7, 2015 06:09 JST | China
CopyCopied

TOKYO -- For the first time, all middle-school social studies textbooks in Japan will refer to the Senkaku Islands and Takeshima, adhering to guidelines that insist they be described as Japanese territory, an education ministry review shows.

The new textbooks will become part of curricula at schools nationwide next spring.

China claims sovereignty over the Senkaku Islands and calls them the Diaoyu. South Korea exercises effective control over the Takeshima islets, which its people call Dokdo.

Japan issued new guidelines in January 2014 that call on textbook publishers to reflect the government's positions on such matters. As a result, the textbooks reviewed this time devote twice as much writing as before to territorial issues, including a dispute with Russia over the so-called Northern Territories, the ministry reported Monday.

These references are important to ensure that "children have the correct understanding" of Japanese territory, Chief Cabinet Secretary Yoshihide Suga, the government's top spokesman, told reporters.

All 20 geography, history and civics textbooks examined by the ministry contain passages on the Senkakus and Takeshima. A fiscal 2010 review found only one in seven history textbooks referred to the islands. This time, eight out of eight do. One describes Takeshima as being under "illegal occupation" by South Korea.

For the first time, the ministry invoked a provision added to the review criteria stipulating that textbooks reflect the government's "unified view" on issues. Five textbooks were revised accordingly. The six rewritten passages included references to the Tokyo war crimes trials and the number of ethnic Koreans killed in violence here following the 1923 Great Kanto Earthquake.

Academics had mixed responses to the textbook review.

"Japanese children had few opportunities to learn about Japan's territory, so it was hard for them to have an awareness of the issues," said Koji Furukawa, a professor of international relations at Chukyo University.

"It is good to see [these issues] being taken up in compulsory education," Furukawa added, arguing they would help Japan "interact on an equal footing with foreign countries."

But Ikuo Gonoi at Takachiho University said that textbooks should have a "well-balanced" mix of Japanese and international views on issues.

The view from overseas

Japan's government has repeatedly tried to instill the nation's youth with "a distorted historical view as well as the erroneous territorial perspective based on it," the statement contends.

The South Korean government "urges" Japan to "uphold the spirit" of the 1982 statement on history textbooks by then-Chief Cabinet Secretary Kiichi Miyazawa and the 1993 statement by Yohei Kono -- the chief cabinet secretary under the Miyazawa government -- on the so-called comfort women issue, and to "make sincere efforts to improve bilateral relations," according to the statement.

Seoul's rhetoric seemed milder than a statement on Japanese textbooks last year, which "strongly condemns" references to Dokdo and "warns" of long-term consequences for bilateral ties. Yonhap News Agency reported speculation that the government may have tweaked the level of its criticism.

China's state-run Xinhua News Agency reported that references to "Japan's wartime atrocities" had been revised "in line with the country's increasingly right-lining politics" under Prime Minister Shinzo Abe. Some textbooks' descriptions of the Nanking massacre had been toned down, according to Xinhua.