HONG KONG   In 2014, young protesters occupied Hong Kong's main district for 79 days, calling for democracy, in what they called the Umbrella Movement. One man in particular showed up every day to talk to students who had set up tents there -- Hong Kong media mogul Jimmy Lai. Apple Daily, a daily newspaper founded by Lai in 1995, has been popular among young people with pages supporting the pro-democracy activists. A company worker in his 20s said, "It is the only reliable media in Hong Kong now." Meanwhile, the Chinese government considers Lai the mastermind of pro-democracy protests and blocks access to Apple Daily's website from mainland China.

At the height of the Umbrella Movement, the daily newspaper's office building was surrounded by hundreds of masked men. They seemed to have been sent from mainland China, as they spoke Putonghua, standard Chinese, not Cantonese, the predominant language spoken in Hong Kong.

When he was 12, Lai smuggled himself into Hong Kong from Guangdong Province. He worked his way up, from a worker at a sewing factory into a self-made businessman. At the age of 32, he founded casual clothing store chain Giordano, which later grew into one of the leading apparel companies in Asia with a business model of mass production and mass selling to meet consumer trends.

In 1989, Lai received a phone call from Martin Lee Chu-ming, a veteran Hong Kong politician. This turned out to be Lai's major turning point. Lee asked Lai to make 5,000 T-shirts to support students who were in Tiananmen Square at the time, calling for democracy. Lai agreed to the request without a hesitation as he was hoping it would be the beginning of freedom. 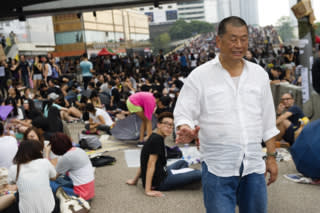 Jimmy Lai walks through the crowd during the Occupy Central demonstrations in Hong Kong on Oct. 2, 2014. (Getty Images)

However, the pro-democracy movement was brought to an end by force, giving Lai a tremendous shock. He said: "I thought there was a good opportunity for somebody who was young and made some money to go into business of selling information, because information to me is freedom." He founded Next Magazine, and ran an article calling Li Peng, then Chinese premier, an idiot, which infuriated the Communist Party. The party threatened to forcibly shut some of Giordano's stores in mainland China, so Lai let go of all the shares in the chain. "There was no choice. I had to define myself by what I am, not what I have," he said.

Lai, who made a revolutionary change in the apparel industry, also breathed new life into the media. Apple Daily had a circulation of 700,000 copies at one point, the second largest in the industry. However, the Chinese government has been gradually tightening its grip on Hong Kong. Many Hong Kong tycoons have refused to place ads in Apple Daily for many years.

After seeing the Umbrella Movement protests to the end, Lai was arrested and eventually stepped out of the front line of business operations. His home is under 24-hour surveillance by reporters from pro-Beijing rival newspapers. In one incident, someone threw a Molotov cocktail at his house.

"We are just eggs against the big wall. We are very feeble; we are hapless. In the end, we may not be able to keep the freedom of Hong Kong, but we won't give up," Lai said. Economic ties between Hong Kong and mainland China are getting stronger. Lai knows that people are keener to earn a living than to win freedom. But he continues to fight for freedom.

China, which restricts the freedom of speech, is now the world's second largest economic superpower and keeps growing its presence as a major trade partner and market. Countries and companies cannot help thinking about a loss if they criticize China and China retaliates them. Will you choose freedom or profit? Lai keeps asking this question to the world.