HONG KONG -- Jimmy Lai, 67, is the founder of Giordano, a pioneer in the fast fashion industry, and Apple Daily, an influential Hong Kong newspaper. He is a fighter for Hong Kong's democratization and an entrepreneur who changed the region's apparel and media businesses.

China has been exerting stronger control over the media lately. One notable example is the disappearance in recent months of five people related to a Hong Kong bookstore that sells books critical of the Chinese Communist Party. The Nikkei spoke with Lai to learn about how he plans to continue his struggle to protect freedom in Hong Kong.

Q: You fled from a village in Guangdong Province, China, to go to Hong Kong, stowing away on a boat, when you were 12 years old. Did your boyhood experiences influence your view of life?

A: I think it gave me the urge to make a dash to freedom. That impulse is definitely in me, but it alone would not have made me what I am today. I once read Friedrich Hayek's "The Road to Serfdom" and am inspired by his books. Then I spent the rest of my life pursuing, in a nutshell, freedom.

Q: After you attained great success with Giordano, a casual clothing retailer, you decided to go into the media business after the Tiananmen Square incident in 1989. Why did you decide to do this?

A: I was losing interest in retail business because I'm not an empire builder. I'm just a creator. I created something, but then I lost interest in it. So I was actually looking for something to do in 1989. In fact, I had not worked for half a year before the June 4 incident happened.

And then, when it happened, I thought there was a good opportunity for someone who was young and had some money to go into the business of selling information, because, to me, information is freedom. You give people a choice; let them choose. It's not a bad thing for someone who made money to go into another line of work, and in this case, I consider it the business of freedom, of delivering freedom. I thought it was a wonderful idea, so I went into the magazine business, and then I went into the newspaper business.

Q: What did you think about the Tiananmen Square incident?

Q: The Chinese Communist Party, which was enraged by criticisms in your weekly magazine, Next Magazine, ordered Giordano to close its stores in China. You were forced to choose between retiring from Giordano and retiring from the media.

Q: When you started Apple Daily, how did you intend to differentiate it from other newspapers in Hong Kong?

A: I never thought of doing anything different. Whether I was in Giordano or in the media, I always thought about solving problems. I try to find a problem in the market and solve it. That's how speed sourcing came about, and that's how Next Media came about. It's all about solving the problems other people or competitors ignore. By solving problems, you can be creative. Create solutions. That's how any true business comes about.

I think the newspaper business at that time was just too boring, because you can make news a lot more entertaining. It wasn't visual enough. There weren't enough photos. It wasn't colorful enough. There wasn't enough information about peoples' daily lives. People want only one type of news. They want the news of life: how to live life, how to eat, how to dress, how to buy things, how to exercise. I think people read about all of that. And, at the time, there was very little of it in newspapers.

Q: These days, you are also intent on responding to digitization. What do you think of it?

A: We started working on this a long, long time ago. We are by far the biggest mobile platform now; by far the No. 1. We began very early. From a major news outlet point of view, I started to research this two years before the debut of the iPhone, because I knew 10 years ago that print editions were going to disappear. If paper is going to disappear, images and moving images are going to replace it, and the only thing that can turn newspaper information and stories into moving images is animation.

What used to take us two to three months to animate we can do in two hours today. That's what we have achieved so far.

Q: What are your plans for the next five years?

Q: In 2014, after you supported the Umbrella Movement, in which young protesters occupied streets in central Hong Kong for 79 days, you stepped down as chairman of Next Digital, the media company that publishes Apple Daily. Why did you decide to quit?

A: I was participating in the movement, and I was at the forefront of the movement. I think, as a person, I can go to the leading edge of a movement like this as much as I like. But that doesn't mean my media enterprises have to come to the same extent. But it's unavoidable that if I still hold a position in the newspaper, or the media, that it is an extension of myself. So I had to resign. The newspaper has to have its own direction, apart from mine. 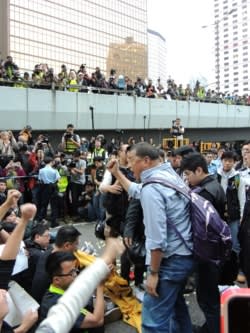 Jimmy Lai stands in the crowd taking part in a sit-in called 'Occupy Central' or 'Umbrella Movement' in Hong Kong, on Dec. 11, 2014. (Photo by Yu Nakamura)

Q: Do you regret that you took part in political activities?

A: Why would I regret that? If you are who you are, nobody can regret being oneself. What is there to regret? You are not doing somebody's job. It's about your soul. If you do the right thing, then why regret it? No.

Q: Are you afraid of retaliation?

A: I'm not Superman. Of course I was frightened. If you are in the kitchen, you have to take the heat.

Q: What path do you think the people of Hong Kong should take from now?

A: This is very difficult to answer because a lot of people have work or business relations with China, or are very much involved in China, and some people believe that without kowtowing to China we won't be able to keep Hong Kong prosperous.

The extent of business dealings with China is making it very difficult for the people of Hong Kong to clearly see the need for us to stand very firm. Hong Kong is something worth standing up and fighting for.

Some tend to think that if we give in, we may have a better time; that if we don't resist China, we may be able to maintain our prosperity. Yes, maybe we could still be prosperous. But what is Hong Kong without freedom? Is this the place where we used to live? Is it a place where we can still live?

We are just eggs against a big wall. We are very feeble. We have to try our best, yet our best is still very small. Perhaps, at the end of the day, we can accept the idea that we may not be able to have freedom in Hong Kong, but not because we failed or just gave up. We won't give up.

Q: Are you also fighting for the people in mainland China?

A: No. But if Hong Kong is free, we will be able to influence the future of China. However, there is nothing we can do about mainland China now.

Jimmy Lai Chee-ying was born in a village in the Chinese province of Guangdong in December 1948. He entered Hong Kong at the age of 12 as a stowaway on a boat and began working at a garment factory. His monthly pay was only $8 at first, but as he continued educating himself, partly by reading books in English, he was eventually promoted to a sales manager position.

In 1981, he founded Giordano, a casual clothing retail chain. The company's business model, in which it produced clothes in quick response to the latest fashion trends and made use of advancements in point of sale systems, became a precursor to the fast fashion industry.

The June 4 incident prompted him to establish Next Media, which launched the weekly Next Magazine and Apply Daily newspaper. In December 2014, he resigned as chairman of Next Media (now called Next Digital). He still retains ownership of the company.