NEW DELHI -- India's youth are increasingly angry over their poor job prospects, an issue that has heightened the worries of Prime Minister Narendra Modi's government as a general election is due by May.

Young people's frustrations were evident at a massive protest march in the capital on Feb. 7. Thousands of members of student and youth organizations gathered from across India to demand employment and quality education.

"2.4 million government jobs remain vacant and we wonder what [is] stopping the authorities from filling them, especially when there is such a huge job crisis," said Srikant Dattatreya Lalita, 30, a protester from the western state of Maharashtra. Before he came to power, Modi promised to create 20 million new jobs a year, Dattatreya added.

Dattatreya, who recently started working as a door-to-door canvasser for a nonprofit group trying to raise awareness about education for girls, gets paid 10,000 rupees ($140) a month. He says he had been jobless for 1 1/2 years and his extended family --  parents, elder brother, sister-in-law and their two children -- have suffered hard times.

"The only other earning member [of the family] was my brother, who drives an auto-rickshaw and earns just 8,000 rupees monthly." 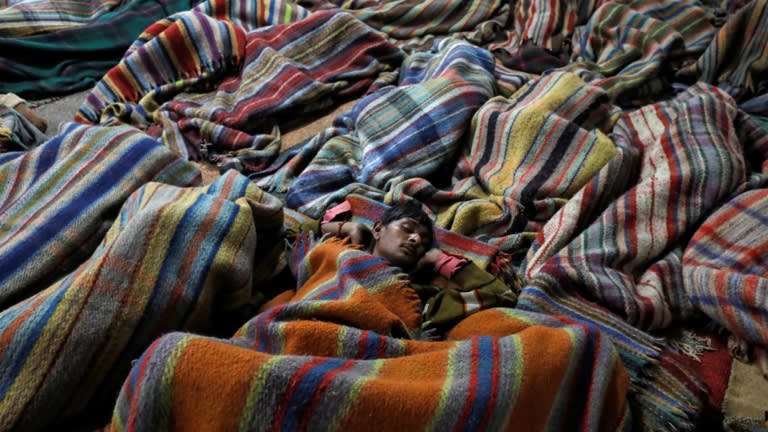 Homeless men sleep at a government-run night shelter on a cold winter night in the old city of Delhi on Jan. 8.    © Reuters

The young protesters also demanded a bigger slice of the budget for education and an end to "the atmosphere of saffronization in universities," said Rushal Heena, referring to the rise of right-wing Hindu nationalists, including Modi's ruling Bharatiya Janata Party.

Heena, 34, said he may vote for a strong anti-BJP coalition in the upcoming election. "The country is being run for corporate houses, not for the common people." In the next election, more than 130 million first-time voters are expected to cast their ballots, making them potential kingmakers.

The ruling BJP saw its support fade in state elections held in November and December, losing power to the main opposition Indian National Congress in three critical states. Modi's government, which is trying to woo back disaffected voters, on Feb. 1 announced an interim budget with big handouts to farmers and tax cuts for the middle class.

"If we can only fry pakoras, what's the use of higher education?"

But the protesters were not impressed, as the budget did not appear to offer much to improve the employment picture. "There's hardly anything for us in the budget," said Jatin Dheer, 27, a New Delhi resident.

Priya Thakur, 24, who is studying for a master's degree in social work, said the future looks bleak for youth. "I fail to understand what this government has been doing for the past five years."

"The government asks the youth to sell pakoras [a deep fried snack], as they say that is employment, too. If we can only fry pakoras, what's the use of the higher education?" Thakur said.

Not even young farmers are pleased. Pankaj Kalia, 29, a protester who comes from a farming family in the northern state of Haryana, said the budget's provision of just 6,000 rupees a year for peasant farmers is hardly going to help that distressed group, which "continues to be denied fair price for its produce," he said.

"Not only did [the government] not create additional jobs, it also snatched the employment of small traders and their workers because of demonetization," he said, referring to the November 2016 decision to scrap high-denomination bank notes, which badly hurt India's cash-based businesses.

"In the general elections, I'll vote for the right candidate from my constituency," Kalia said, implying that he would not vote for Modi's BJP. The big march in New Delhi came days after Finance Minister Arun Jaitley tweeted, "If there is no job creation, as alleged, there should have logically been great social unrest in the country. The past five years have passed off without a single major protest movement."

Jaitey has his answer, Kalia said. "Now we are on the streets and demanding jobs."

The issue of unemployment is a convenient stick for the opposition to beat the government with. The INC says Modi's government has put the future of India's youth in jeopardy.

While the BJP comfortably won the 2014 elections, this time it is unlikely to secure the 272 seats it needs for an absolute majority, according to two surveys released in January.

The ABP News-CVoter survey forecast 233 seats for the BJP-led National Democratic Alliance, 167 for the INC-headed United Progressive Alliance and 143 for other parties, while the India Today-Karvy Insights Mood of the Nation poll predicted the NDA would get 237 seats, the UPA 166 and others 140.