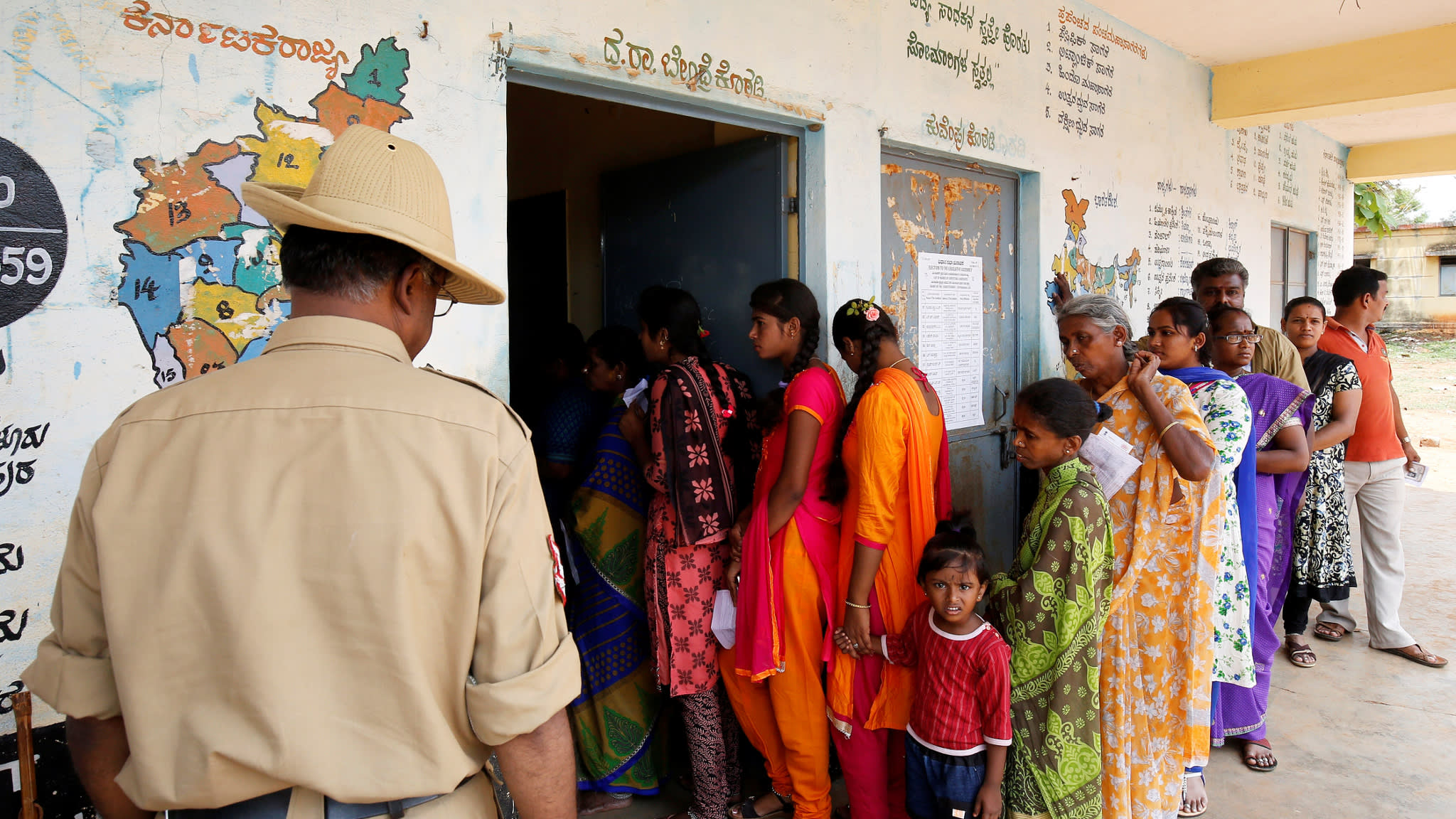 Voters wait in line to cast their ballot outside a polling station last year during Karnataka assembly elections at a village on the outskirts of Bengaluru, India.   © Reuters
KIRAN SHARMA, Nikkei staff writerJanuary 15, 2019 15:13 JST | India
CopyCopied

NEW DELHI -- Prime Minister Narendra Modi's administration aims to reserve 10% of government jobs and academic admissions for poorer members of India's upper castes, a move critics call a "political gimmick" to woo voters ahead of the general elections due by May.

This new quota is linked to a planned change in the 50% reservation allocated to the country's lower castes and tribes, created to aid them after centuries of neglect. These marginalized individuals had been forced to take jobs such as cleaning toilets, and were not allowed to enter religious sites. A bill amending India's constitution to raise the ceiling on reservations to 60% from 50% cleared both houses of Parliament last week.

Analysts think the push for the 10% quota was triggered by the BJP's loss of power in three Hindi heartland states of Rajasthan, Madhya Pradesh and Chhattisgarh in the November-December regional elections. People in these states were dismayed by high joblessness as well as an agrarian crisis that plunged farmers into deep debt.

With the national polls approaching, the ruling party will leave no stone unturned to appease voters, including upper castes, the analysts say.

"Upper-caste people think BJP is their party and hope to get more from it," political analyst Narayan Bareth said. "Basically, these people are against any reservation [in jobs or educational institutes], and say if there has to be a quota it should be extended to them as well."

The ruling party aims to address its traditional voter base, he said.

"There was a lack of enthusiasm among the upper caste [to participate] in recent state polls, and many of them launched social media campaigns calling for people not to vote for any party," Bareth said.

Modi hailed the bill's passage as a victory for social justice. By approving the legislation, "we pay tributes to the makers of our constitution and the great freedom fighters, who envisioned an India that is strong and inclusive," he said Wednesday.

The main opposition Indian National Congress supported the bill but questioned its timing, saying the government introduced it with the intention of winning voters.

Yet analysts say the change will make little difference on the ground.

"There are [studies] showing that every day 30,000 people enter the job market [in India] and there's employment for only 450," Bareth said. "In the government sector, meanwhile, we hardly see vacancies or recruitment advertisements."

But the BJP likely will showcase the 10% quota as a major achievement during the election campaign, he said, regardless of whether it takes effect before the vote.

Yashwant Sinha, former finance minister and a rebel BJP leader, tweeted: "The proposal to give 10% reservation to economically weaker upper castes is nothing more than a jumla [rhetoric]." He added that the legislation is "bristling" with legal complications.

The bill faces a challenge by nonprofit group Youth for Equality in the Supreme Court of India. The organization's petition cites a 1992 case in which the court "specifically stated that the economic criteria cannot be the sole basis for reservations under the Constitution." The petition also argues that the 50% cap fixed on reservations by the top court in relation with a 2006 case "cannot be breached."

Bareth sees the reservation bill as the product of a government with an eye on the polls.

"It is nothing but a political gimmick," he said.