A banner of Indonesian President Joko Widodo, right, and his deputy Ma'ruf Amin is on display in Jakarta on Oct. 20. Widodo was sworn the same day for his second and final five-year term.    © AP

JAKARTA -- When Agus Suparmanto, a ruling coalition lawmaker who owns a small construction company, appeared in a white button-up shirt at the presidential palace in Jakarta on Oct. 22, few observers thought he would land a key economic cabinet post.

Journalists present guessed that Suparmanto, who is best known as chairman of the Indonesian Fencing Association, would be appointed as sports minister by the following day. But President Joko "Jokowi" Widodo surprised many by making him trade minister.

Suparmanto is seen as a misfit, especially given that Widodo has repeatedly said there is an urgent need to curb Indonesia's trade and current-account deficits, and to attract foreign investment amid the challenges posed by the U.S.-China trade war.

Widodo has brought in a number of political figures -- including opposition lawmakers -- into his cabinet in an attempt to stabilize his administration and push through difficult reforms. But some of these appointments have also raised eyebrows.

Agus Gumiwang Kartasasmita, a ruling coalition politician who used to be social services minister, was named as industry minister. His lack of relevant experience raises doubts as to whether he will be able to boost the manufacturing sector, let alone implement the Industry 4.0 initiative announced last year.

Widodo also appointed Bahlil Lahadalia, chairman of the Indonesian Young Entrepreneurs Association, as chief of the Investment Coordinating Board. While he has been engaged with various domestic businesses, he has weak international exposure. In contrast, his predecessor, Thomas Lembong, was a Harvard graduate and had worked at Morgan Stanley before joining the government.

Johnny Plate, the new communications and information minister, has little known experience in that sector. He has occupied a senior position at AirAsia's Indonesian operations and also has a background in the plantation sector. Again, observers see his appointment as counterproductive to the president's big digital economy plans.

"It doesn't matter if the ministers come from political parties... it is unavoidable," said Enny Sri Hartati, senior researcher at the Jakarta-based Institute for Development of Economics and Finance. "But it is most important to have the right man in the right place. The problem is that many of those who occupy the cabinet posts don't meet that criteria. Nearly all economic ministers are not the right fit." 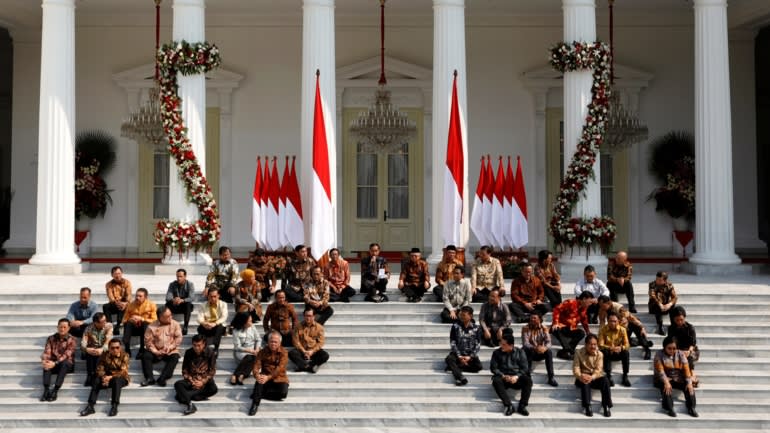 Indonesian President Joko Widodo sits with his newly appointed cabinet on the stairs at the Merdeka Palace in Jakarta on Oct. 23.   © Reuters

But the consultancy raises concerns over the wider economic team, which it calls "less encouraging," especially in regard to non-Chinese foreign direct investment.

Eurasia specifically noted Luhut Pandjaitan, the chief maritime minister and a close aide to Widodo who had unofficially taken the role of investment broker during the president's first term. Pandjaitan's roles have now been expanded to officially include investment oversight, which, with his statist and pro-Beijing inclinations, "does not bode well" for foreign investment liberalization, Eurasia said.

Nomura struck a more positive note, saying the economics team is a good mix of experienced technocrats and three coordinating ministers from political parties who may be able to help Widodo gather political support for reforms.

The Japanese brokerage cited the promotion of Airlangga Hartarto, the chairman of the Golkar Party and a former industry minister, to chief economic minister. "We believe he has worked well with the President and shares his vision on Industry 4.0 and the digital economy," Nomura said.

Nomura also cited the appointment of Erick Thohir, the former president of Italian soccer club Inter Milan, as state enterprise minister. "We think his private sector background as a media and sports businessman may help to drive reforms with SOEs and to improve coordination between them."

Widodo's decision to accommodate an expanded coalition -- most obvious in his recruitment of opposition leader Prabowo Subianto as defense minister -- reflects the weight he puts on political stability and the need to gather enough parliamentary support to push through legislation. This includes an omnibus bill on investment he hopes to pass by the end of this year to speed up reforms to draw investment.

Eurasia, however, thinks the increased parliamentary control will not necessarily expedite economic reform. "Jokowi already had a sufficient parliamentary majority -- the constraints to date have been his cautiousness, desire to build broad consensus, and tendency to appease vested interests.

"If anything, more parties will mean more interests to manage, though the broader coalition potentially weakens the ability of any individual power broker to oppose the president."