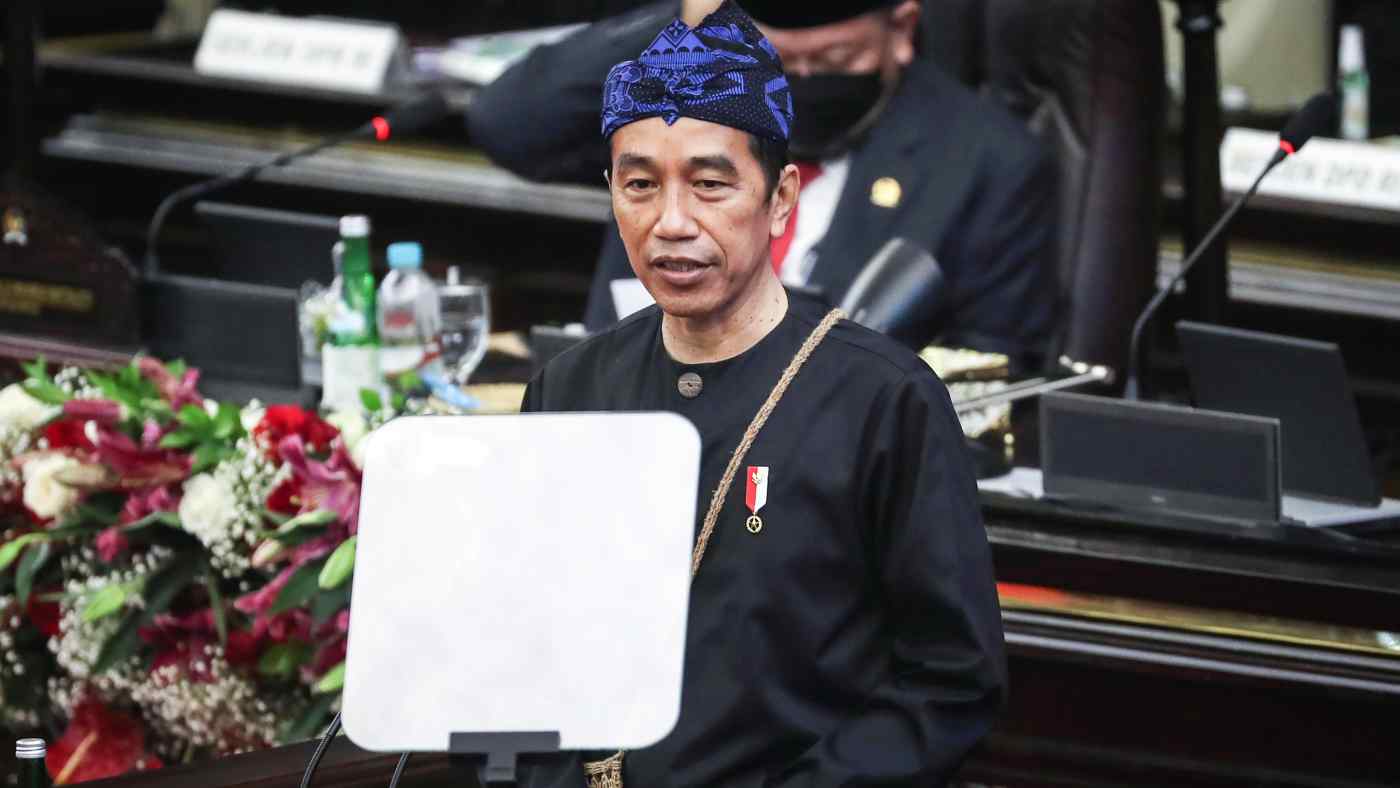 Widodo's remarks came in his annual state of the nation speech to parliament to commemorate the 76th anniversary of Indonesia's independence. Like last year, only a select group was present in parliament to minimize the risk of infections.

The pandemic prompted an economic contraction last year. And while gross domestic product grew 7% in the second quarter, tighter social restrictions in place since early July to curb the spread of the delta variant are set to weigh heavily on the economy this quarter.

"The pandemic has indeed significantly slowed down our economic growth," the president said. "But it must not hinder the process of structural reforms of our economy."

Widodo gave the newly launched "Online Single Submission" website that processes investment permits as an example, saying it allowed tasks such as licensing, incentives and tax management to be done more quickly and transparently.

The website is part of a controversial job creation law passed last year amid protests from unions, students and other critics who viewed it as too pro-business.

Structural reforms "to promote inclusive and sustainable economic development remain Indonesia's main agenda," he said, adding that development of "quality human capital" -- the pledge he made for his second term -- remains a priority. He also vowed to continue developing infrastructure, his signature policy since taking office in 2014.

He also said investments, both foreign and domestic, should help Indonesia transform into a sustainable green economy. "Transformation toward new and renewable energy as well as the acceleration of an economy based on green technology will be an important change in our economy," he said.

On COVID-19, Widodo said that while Indonesia "deploys all resources" to secure vaccines for its people, "self-sufficiency in our pharmaceutical, vaccine, and medical equipment industries remains a major drawback that we must address."

Indonesia has relied on China for its inoculation program. As of Aug. 6, Indonesia has received a total of 180 million vaccines, with over 85% supplied by Beijing.

"However, the pandemic has spurred development of our domestic pharmaceutical industry, including the development of Red-and-White vaccines as well as medical oxygen," the president said. "The availability and affordability of medicines should be guaranteed and there is zero tolerance to anyone who obstructs our humanitarian and national missions."

Indonesia is the epicenter of the pandemic in Southeast Asia, with 3.8 million cumulative confirmed cases, and total deaths reaching more than 117,000.

"I am fully aware that the COVID-19 pandemic has brought with it exhaustion, boredom, weariness, sadness, and distress. I also understand that there are many criticisms directed at the government," Widodo said. "I would like to thank [the Indonesian people] who have been active citizens and continuously built a democratic culture."

Widodo briefly went off script toward the end of the speech, explaining his choice of Baduy clothes for the occasion, saying he "likes them because the design is simple and comfortable to wear."

Baduy people are a traditional community in the province of Banten, who are largely secluded from the wider world. They are said to have had zero COVID-19 infections to date. People wait to receive a COVID-19 vaccine at Pakansari Stadium in Bogor, on the outskirts of Jakarta, on August 14.   © Reuters

In a separate speech later on Monday, Widodo proposed a 2022 budget aimed at economic recovery from COVID-19, structural reforms, as well as fiscal consolidation. He set out a plan for state expenditure of 2,708.7 trillion rupiah ($188 billion), a 1.5% decrease compared to planned 2021 spending.

The spending plan forecasts a budget deficit to GDP of 4.85%, down from the 5.7% projection for this year. Indonesia has a fiscal deficit cap of 3% to GDP, but that rule was temporarily relaxed last year as the country increased spending to tackle the pandemic. The government is aiming to return to the 3% ceiling in 2023.

Health spending saw a 21.7% drop from the previous year's revised plan to 255.3 trillion rupiah, after significant increases during the course of 2021 to combat the surge in COVID-19. The health budget makes up 9.4% of the budget.

The education budget, the key to Widodo's policy of developing human capital, saw a minor 0.2% increase to 541.7 trillion rupiah, while the infrastructure budget is planned at 384.8 trillion rupiah.

"We will exert maximum efforts to achieve the growth target's ceiling," Widodo said.

"In 2022, we are still going to face great uncertainties [due to COVID-19]," the president said. "We also have to be prepared to face other global challenges, including the threat of climate change, increased geopolitical dynamics as well as uneven global economic recovery.