JAKARTA -- Indonesian President Joko "Jokowi" Widodo is seeking to bolster his public support by handing a number of advisory and cabinet posts to media moguls or members of their families.

This has prompted observers to say he is trying to use their influence to silence his critics as he seeks to push through potentially unpopular economic reforms.

The appointments include Erick Thohir, the founder of Mahaka Group, which owns several TV stations, a newspaper and radio stations. He has been named minister for state-owned enterprises.

Among Widodo's new advisers, Putri Indahsari Tanjung is the daughter of Chairul Tanjung, founder of the CT Corp. conglomerate that owns TV stations and online news outlets. Surya Paloh, the chairman of a party in the president's coalition, is the owner of Media Group, operator of 24-hour news channel Metro TV and a number of regional newspapers.

The many influential media figures among the appointees "show the need for image politics from the president and the government... even though Jokowi said he has nothing to lose in his second term," said Ubaidillah Badrun, a professor of politics at Jakarta State University. The appointments "damage democracy" by undermining objective reporting on the government, he said.

"The problems that the government faces are not easy, especially on the economic front, where many unpopular decisions have to be taken," Badrun said. "The smallest disruption, probably including [by] the critics, would impact the effort to solve these problems. I can see this is one way for Jokowi to quell all those disruptions by gathering them all in the government circle." 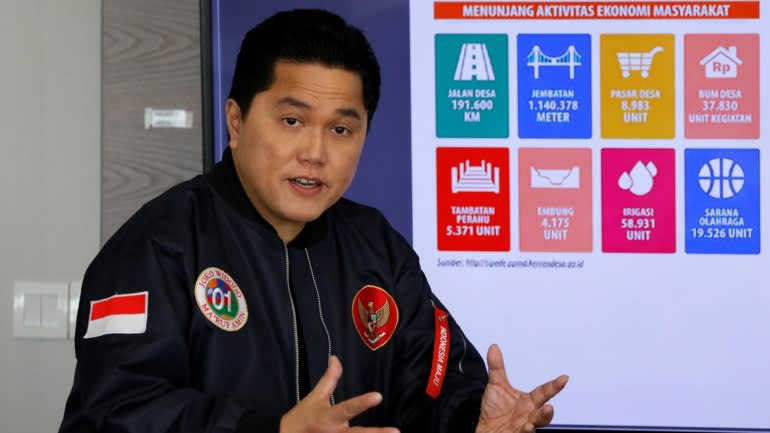 Widodo was inaugurated in October for the second of a maximum of two terms under Indonesian law. But analysts say he is still determined to boost his sliding approval rating, especially among younger citizens.

To this end, he has appointed a team of seven tech and social entrpreneurs, ranging in age from 23 to 36 years old, as advisers.

"These seven young people will be my discussion partners on a weekly, daily basis [and] will provide innovative ideas, so we can look for new ways out of the box and... pursue progress," Widodo told reporters last week.

"I also asked [the advisers] to be my bridge with young people, young santri [Islamic boarding school students], diaspora scattered in various places," the president said. "I am sure with fresh and creative ideas to build this country, we will see later whether these ideas can be applied to government."

However, the deputy chairman of the Gerindra Party, Widodo's new coalition partner, was less than enthusiastic.

Fadli Zon was quoted in local media as saying the millennial advisers were a "decoration" and their tasks overlapped with other institutions. "It's far from the spirit that the president himself hopes for efficiency. So this is tantamount to waste," Zon said.

Hasanuddin Ali, CEO of Alvara Strategic Research, said the appointments may help Widodo regain youth support. A quick count for the April presidential election by one pollster showed the president won just over half the votes of millennials. His overall approval has also fallen to 58.8% in October from 65.3% a year earlier, according to surveys by Litbang Kompas.

"With so many issues, Jokowi is seen as not taking the side of the younger generation," Ali said, citing student demonstrations in September over contentious revisions to the criminal code and changes to the anti-corruption agency that critics say weakened the institution.

"These [appointments] could be his way to reach out to the youth," Ali said.

But he added: "The advisers he appointed represent a small slice of millennials -- the urban, upper and middle classes. What we recognize is that so many of the disappointed millennials on these issues are from the lower class."

Additional reporting by Ismi Damayanti and Jun Suzuki in Jakarta.