President advances deregulation but stalls on capital relocation and infrastructure JAKARTA -- When Indonesian President Joko "Jokowi" Widodo was sworn in for a second five-year term last October, he talked of his dream of the Southeast Asian country becoming one of the world's top five economies by 2045.

On Tuesday, as he concluded his first year of term two, he finds himself having made progress on deregulation to attract foreign investment, but behind on the public works agenda. Most symbolically, the ambitious project to move the Indonesian capital from Jakarta to the island of Borneo has yet to get off the ground.

Indonesia is the world's 16th largest with a gross domestic product of $1.1 trillion. His goal of $7 trillion is still far off.

The parliament delivered on the deregulation plank earlier this month by passing the omnibus job bill over the opposition of labor unions and other detractors.

The World Bank praised the law in a statement released Friday, calling it a "major reform effort to make Indonesia more competitive and support the country's long-term aspiration of becoming a prosperous society." 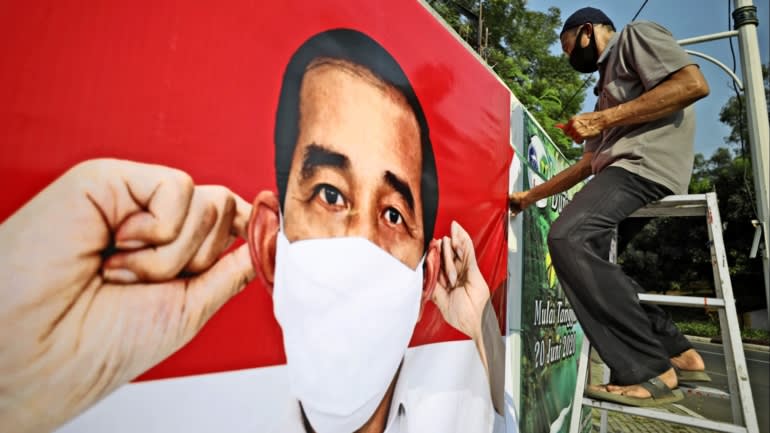 A worker installs a banner of Indonesian President Joko Widodo calling on the public to wear a face mask, in Jakarta on Aug. 26.   © AP

The new legislation transfers all investment paperwork online, shortening to a few days a process that used to take months. The government will later start simplifying the pay grades for bureaucrats.

But the other major plank of Widodo's agenda, infrastructure development, has lagged.

The funds budgeted for the capital relocation have instead been directed toward containing the fallout from the coronavirus pandemic. Government offices were supposed to start relocating in 2024, but whether that schedule is workable has become an open question.

In addition, the opening of the high-speed rail connecting Jakarta to the metropolis of Bandung will likely be pushed back to 2022 or later. The line is being built with the cooperation of China. A plan to develop a nationwide highway system has also stalled in some parts.

Indonesia is supporting career development, whether it involves work training, obtaining credentials or finding jobs. But the pandemic has disrupted that program, according to Bhima Yudhistira at the Institute for Development of Economics and Finance.

"Coronavirus has forced training to go online, and [the workforce development program] has not been effective," said Yudhistira.

Surveys by Indonesian pollster Indikator had shown a downward trend of people saying they are satisfied with Widodo's job performance. But the most recent poll on Sept. 20 had his job approval rating at 68.3%, up 3.1 points from the July survey. The uptick stems from people feeling the benefits of the economic stimulus programs, according to observers.