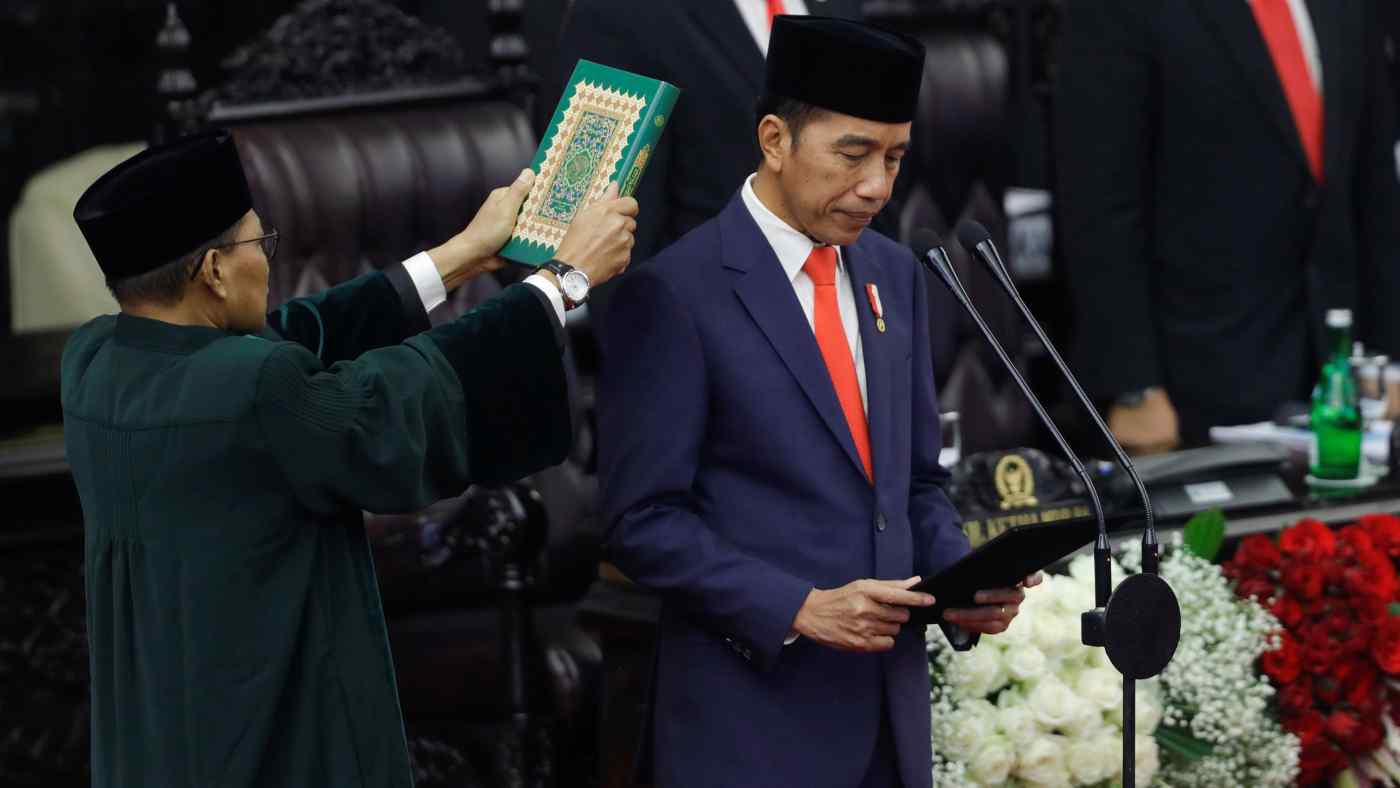 JAKARTA -- Indonesian President Joko Widodo pledged to continue reforming the economy, emphasizing the importance of skilled labor, as he kicked off his second five-year term Sunday.

The leader of the world's third-largest democracy was sworn in with new Vice President Ma'ruf Amin at the parliament in central Jakarta, with heads of government from countries including Malaysia, Singapore and Australia in attendance. China sent Vice President Wang Qishan.

"Our dream in 2045 is for Indonesia to enter the top five world economies, with poverty approaching zero percent," said the president, popularly known as Jokowi, in his inauguration speech.

So developing human resources will be "our top priority," with the country looking to build skilled personnel in science and technology, Widodo said. "New ways must be developed," he said.

"We need a large endowment fund for our human resource management," Widodo said. "Collaboration with industry is also important and needs to be optimized. [We must] use technology so that it makes it easy to reach all corners of the country."

The president also promised to continue building infrastructure across the country -- a hallmark policy of his first term -- while vowing to "simplify all forms of regulatory constraints" and to revise laws that hamper job creation in the country, as well as "large-scale simplification of bureaucracy" to spur investment for job creation, and reduced dependence on natural resources.

"I ask the ministers, officials and bureaucrats to seriously guarantee the achievement of the objectives of the development program," Widodo said. And "those who are not serious, I will not forgive," he warned.

Security was tight at the swearing-in over fears of a reprise of last month's student demonstrations calling for the president to backtrack on controversial new legislation. The authorities also remained on high alert for potential terrorist attacks, following last week's attack on chief security minister Wiranto by suspected Islamic State sympathizers.

Widodo said he will name his new cabinet Monday.

The emphasis on job creation and deregulation comes amid increasing concern in his administration over an economic slowdown, especially after a closed-door World Bank presentation on the economy last month.

There, the World Bank pointed out that growth in Indonesia has been slowing "and will weaken further with the global slowdown" and that businesses are moving out of China due to its trade spat with the U.S. "but are not coming to Indonesia because Indonesia's neighbors are more welcoming."

The damning assessment came despite Indonesia improving markedly in the international institution's "ease of doing business" ranking since Widodo took office in 2014.

Indonesia targets economic growth of 5.3% for 2020, but the World Bank forecasts only 5.1% growth.

"Hopes have recently been raised that now Jokowi is entering into his final term and will not face reelection, he will be more prepared to take on vested interests and push through controversial reforms," wrote Gareth Leather, senior Asia economist at Capital Economics, in a report published days before the inauguration.

"However, it remains to be seen if he can carry through with his pledge given the level of opposition he is likely to experience, especially from the trade unions," Leather warned. "Indonesia has always been much readier than other countries in the region to embrace protectionism and reject liberal economic reforms. In part this is a legacy of the Asian financial crisis, which left Indonesia suspicious of open markets and foreign capital. This mindset is unlikely to change in a hurry."

Widodo remains popular even after the recent protests, with his approval rating dipping only slightly to 58.8% in a major newspaper's survey last week. But one of the students' demands was to scrap revisions to the notoriously strict labor law, and whether the president can push through with reforms promised at the start of his second and final term remains to be seen.