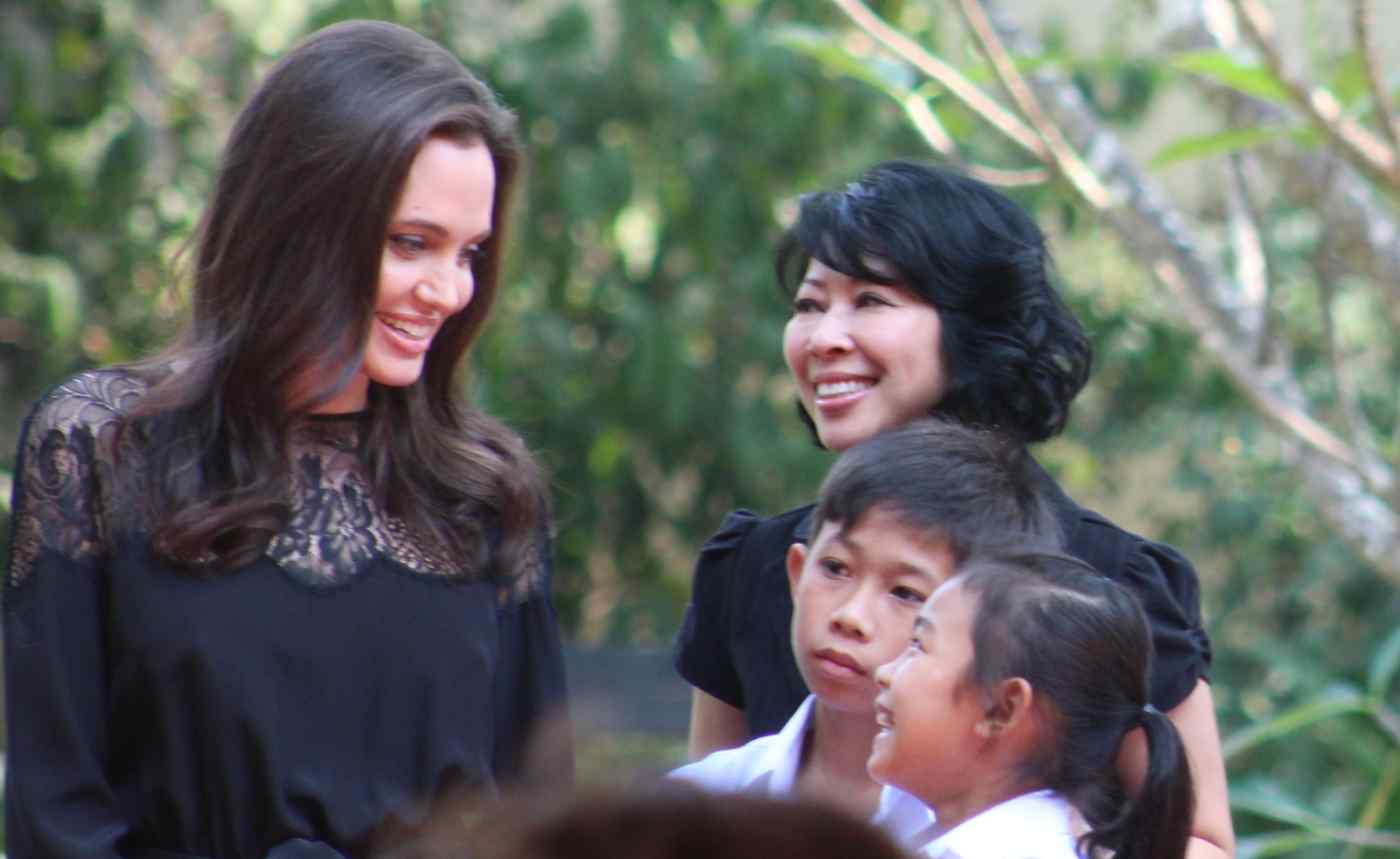 SIEM REAP, Cambodia - Hollywood actress-turned-director Angeline Jolie launched her new film portraying the horrors of the Khmer Rouge regime on Saturday night amid the ancient temples of Angkor, western Cambodia. For Jolie, 41, it capped a personal and professional love affair with Cambodia that has spanned nearly two decades, since she starred in the fantasy action movie, Lara Croft: Tomb Raider, in 2000.

Nestled in the impenetrable darkness of the Angkor complex, surrounded by the phantasmagoric structures of the ancient period, the Netflix film First They Killed My Father was aired to a mostly Khmer audience of about 1,500 people, including Cambodian King Norodom Sihamoni, government officials and local people. The setting was symbolic of Jolie's long-held fascination with Cambodia and her decision to gear the film toward a local audience. She adopted one of her six children, Maddox Jolie-Pitt, from a Cambodian orphanage in 2002.

Speaking at a relaxed press event at the Raffles Hotel in Siem Reap, near the Angkor complex, Jolie said the film - shot entirely in Khmer language with an all-Cambodian cast -- offered a new perspective on Pol Pot's brutal four-year regime, through the eyes of a child.

"I wanted to tell the story through the eyes of a child and I wanted to walk through this story with a different point of view...not just on war but on the love of family," Jolie said.

"In fact I wanted to understand what my son's birth parents may have gone through and I wanted to know him better and his country better, and I hope to do honor to those who survived."

"I cannot find words to express what it means to me that I was entrusted with telling part of the story of this country," she said. "This film was not made to focus on the horrors of the past, but to celebrate the resilience, kindness and talent of the Cambodian people."

The movie is the fifth film to be directed by Jolie, including an earlier documentary. Apart from the all-Cambodian cast, Cambodian technicians, artisans and craftspeople comprised the largest portion of the crew, along with more than 3,500 Cambodian background actors.

When Jolie first visited Cambodia to shoot Tomb Raider in 2000, she was moved by the country's tragic past and appalled by the huge quantity of landmines left over from decades of civil war. She subsequently became a goodwill ambassador for the United Nations High Commissioner for Refugees to raise awareness of the problems. In 2003, she set up the Maddox Jolie-Foundation in Cambodia - named for her adopted son -- to deal with environmental issues.

Bringing the past to life

Jolie's new movie, shot over 15 months with an undisclosed budget, is based on the memoir of Loung Ung, a Cambodian human rights activist who was five years old when the Khmer Rouge marched into Phnom Penh in 1975. Amid mass killings, imprisonment and torture, the regime, headed by Pol Pot, drove the city's population to the countryside in a bid to create an agrarian utopia. Loung Un's father, mother and two of her sisters were executed under the Khmer Rouge, which is thought to have been responsible for around two million deaths.

While films and documentaries about the Khmer Rouge have undergone a recent revival, with about 10 notable releases in the past five years, few have matched the critical and commercial success of Roland Joffe's Oscar-winning movie The Killing Fields in 1984, a tale of friendship and survival during the period. That film, however, was made in Thailand. Rithy Panh, who co-produced First They Killed My Father, came closest with his Oscar-nominated movie The Missing Picture in 2013.

Despite the reluctance among many Cambodians to acknowledge and confront their traumatic past -- studies have found post-traumatic stress disorder rates range from 14.2% to 33.4% among Khmer Rouge survivors -- Panh told reporters it was important to keep chipping away at the past, as the Khmer Rouge story was one that "must be told and it belongs to everybody. We need that."

Award-winning journalist Elizabeth Becker, who started covering Cambodia for the Washington Post in 1973, told the Nikkei Asian Review on the sidelines of the press conference that the film is not a history lesson as such, but serves to capture "every single interview I ever had of what the view was from the individual Cambodian -- and that's not in the other films."

Becker, who was a consultant on the Killing Fields, noted the contrast between the two films, saying while the makers of that film "really did do their homework," it was "as much the western point of view as the Cambodian." 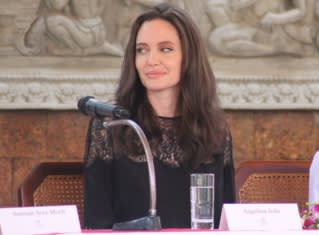 Angelina Jolie at the press event for the premiere of her ​new film "First They Killed My Father," in Siem Reap, Cambodia on Feb. 18. (Photo by G​eorge Styllis)

For Jolie's movie, there is a clear statement: "The premiere is here because the film is for Cambodians," Becker said.

From, Feb. 19, screenings of Jolie's film will be held in as-yet undisclosed locations in western Cambodia. The film will later be shown in the main western town of Battambang and the capital, Phnom Penh, and will be released on Netflix in seven months.

Jolie's decision to release the film in Cambodia and make the rest of the world wait in deference to her Cambodian audience may hinder the film's chances of commercial success in the short term. But, Jolie noted, it is a price worth paying, as the film is really "a labor of love."