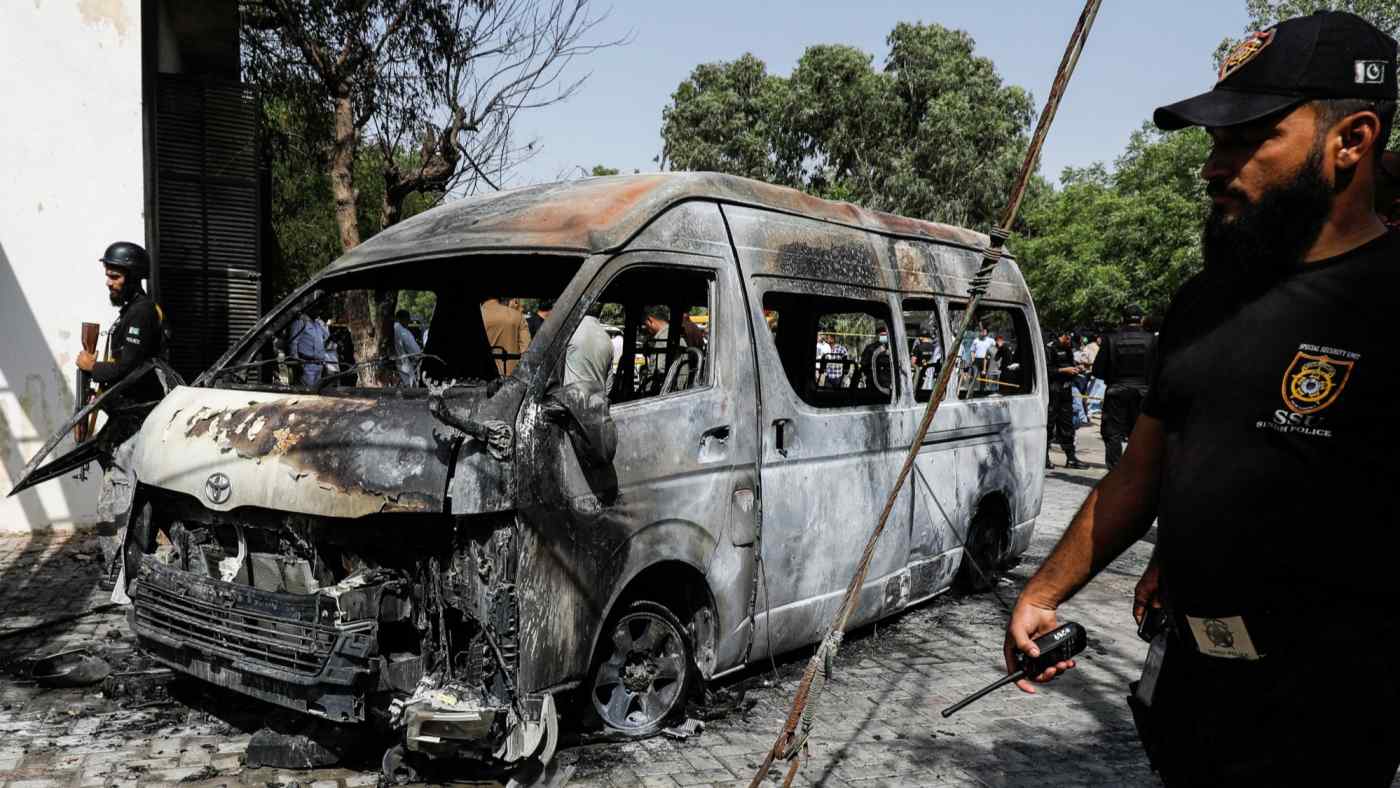 Police officers and investigators gather near a passenger van after a blast at the entrance of the Confucius Institute at Karachi University in Pakistan.   © Reuters
April 26, 2022 22:55 JST | Pakistan
CopyCopied

ISLAMABAD (Reuters) -- A bomb blast on a minibus killed three Chinese employed at Karachi University's Confucius Institute on Tuesday, officials and police said, in the first major attack in Pakistan on nationals of longtime ally China since last year.

The three were among passengers on a minibus traveling near the university when the bomb exploded, killing the Chinese and a fourth person, a Pakistani, police said.

The Baloch Liberation Army (BLA) separatist group claimed responsibility for the blast, adding in an email sent to Reuters that it had been carried out by a woman suicide bomber.

The blast was the first major attack in an urban area of Pakistan since Prime Minister Shehbaz Sharif took power this month. He condemned what he called a cowardly act of terrorism.

"I am deeply grieved on the loss of precious lives including of our Chinese friends in the heinous attack in Karachi today," Sharif said in a statement.

A university spokesman told Reuters the dead included the Chinese director of the Confucius Institute, a Chinese language and cultural center, and other faculty members of the institute.

"The cowardly incident is a direct attack on the Pakistan-China friendship and ongoing cooperation," Pakistan's foreign office statement said. "Pakistan attaches great importance to safety and security of Chinese nationals, projects and institutions in Pakistan."

The blast was the first major attack against Chinese nationals in Pakistan since last year when a suicide bomber blew up a passenger bus in northern Pakistan that killed 13 people, including nine Chinese.

"The reports we have got is that they're Chinese," he said in comments telecast live from the scene of crime. He said the three Chinese were teachers at Karachi University.

Nabi said a local guard and another Chinese who were in the van are wounded critically.

The BLA attacked two army bases in southwestern Balochistan Province earlier this year, killing seven soldiers, and it lost 13 of the attackers in an hourslong gun battle with the Pakistan army.

Baloch separatist guerrillas, who say they are fighting for a greater share in regional resources of mines and minerals, usually attack gas projects, infrastructure and the security forces.

They also attack Chinese projects, and occasionally kill Chinese workers despite Pakistani assurances that it is doing everything it can to protect the projects.